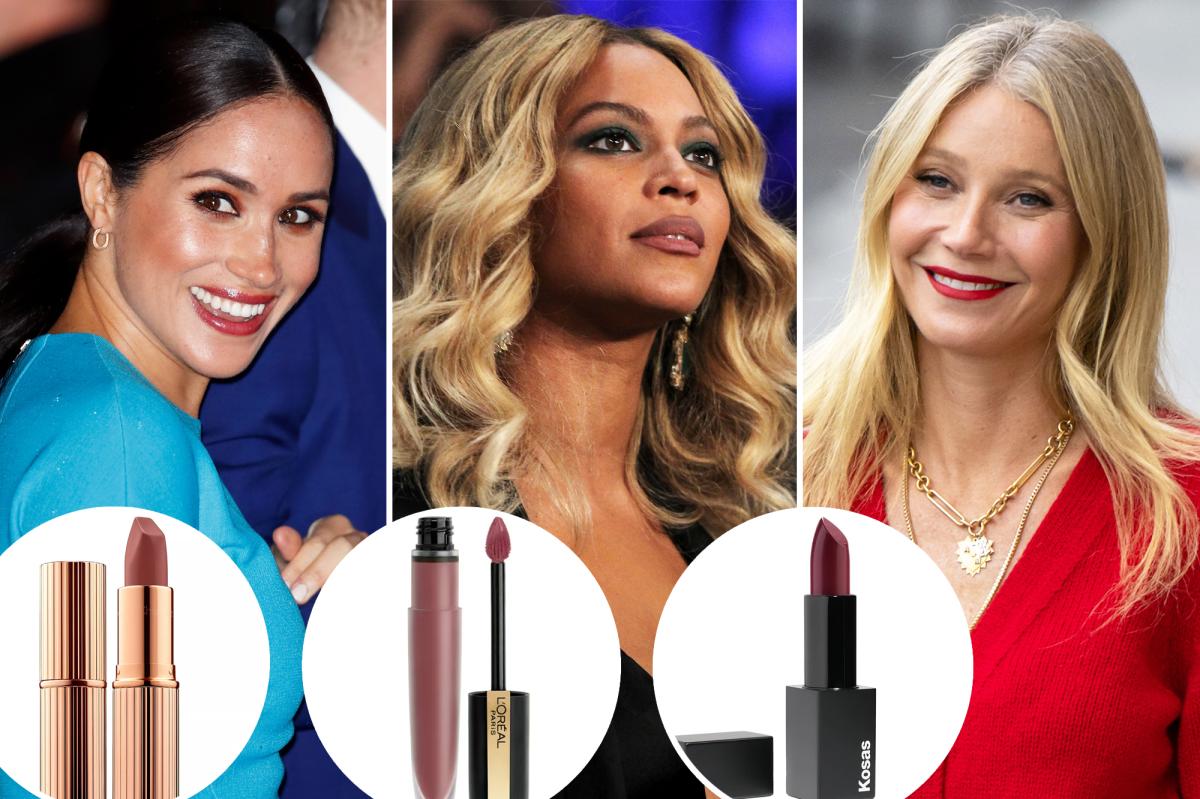 Ever wondered what gives your favorite celebrity their perfect pout?

These days, it seems like every A-lister under the sun has a beauty brand — but they’re not always swiping on their own products from day to day.

In fact, a number of stars have either spoken about their favorite lipsticks or showed them off in social media posts; sometimes, it’s their makeup artists who let us in on which shades they’re sporting.

From cosmetics-industry classics like Charlotte Tilbury Pillow Talk and MAC Ruby Woo to clean lip colors from Kosas and RMS, keep scrolling to learn about (and shop) the lipsticks stars and their glam gurus swear by.

This iconic nude-pink hue is loved by both pop royalty and real royalty: Britney Spears wore it on her wedding day in 2022, while Meghan Markle swiped it on for her Time cover shoot in 2021. The Duchess of Sussex is also a fan of the taupe-nude Very Victoria ($34) shade, which is named after her friend Victoria Beckham.

Tilbury even earned an MBE (Member of the Most Excellent Order of the British Empire) from the Queen in 2018, giving her brand the ultimate royal seal of approval.

Speaking of the royal family, if it’s Kate Middleton’s lip look you’re after, try swiping on this semi-matte pink nude — which happens to be the exact product the Princess of Wales wore for her royal wedding to Prince William in 2011.

Taylor Swift’s signature scarlet pout often comes courtesy of this oldie but goodie. “It’s a staple. I was the last person to discover it,” the “Anti-Hero” hitmaker told People of the bestselling blue-based red in 2015.

This beloved clean beauty brand is popular with TikTok influencers and Hollywood stars alike. Gwyneth Paltrow revealed on her Goop podcast that she loves this ripe berry hue, saying, “It’s a beautiful red and whenever I wear red that’s the one that I wear.”

Mindy Kaling, meanwhile, prefers the Darkroom ($28) shade. “I love this because it’s red, but you can wear it to a meeting without looking too vampy like you want to date the person you’re meeting with,” the “Mindy Project” star joked on IGTV in 2019, according to Who What Wear.

Other fans of the Kosas formula — made with fine line-smoothing mango seed butter in addition to nourishing shea butter, cocoa seed butter and jojoba oil — include Naomi Watts and Olivia Wilde, the latter of whom wears it in Undone ($28).

This celeb-loved “siren red” is another of Taylor Swift’s favorites; in addition to name-checking it in several interviews over the years, the pencil also popped up in an Instagram photo the Grammy winner posted before the 2014 Met Gala.

A number of celebrity makeup artists believe this pricey product’s the best nude lippie money can buy — including Adam Burrell, who works with Jennifer Hudson and Jessica Simpson and told E! News it’s his “absolute favorite universal nude” thanks to its “pure pigment and luxurious texture.”

Kim Kardashian’s longtime glam guru, Mario Dedivanovic, once praised the warm-toned peach shade on his star client’s now-defunct app, saying it “looks good on everyone” and confirming he’s used it on Kardashian.

Perhaps that’s why it’s popular with the likes of Lizzo and Natasha Lyonne, who both wear the warm apricot nude Pleased. Lizzo’s makeup artist, Alexx Mayo, showed off his client’s glossy lip on Instagram, while Lyonne rocked the same hue at the 2023 Golden Globes.

Miranda Kerr often wears this bold, richly pigmented pick on the red carpet. “I like RMS Red because it’s from a natural brand that uses just organic ingredients. [RMS Red] is so bright and almost an orange-red, which I like,” the top model told InStyle of the “transformative” product.

She’s not the only fan; Kourtney Kardashian swiped it on in the shade Magic Hour ($30) for “’90s vibes” in a Vogue “Beauty Secrets” video, while both Emma Watson and Gisele Bündchen have been spotted rocking it in other hues.

This drugstore buy is a hit with Beyoncé — so why not add it to your own stash?

“When I know I’m not going to see my client again, and I know there’s going to be no touch-up and they’re going to put something on and go, this is my jam,” the “Single Ladies” singer’s longtime makeup artist, Sir John, told Well + Good in 2019.

The pink-brown I Create shade is Queen Bey’s pick; she even wore it on the red carpet when she accepted the Vanguard Award at the GLAAD Media Awards in 2019.

Ah, the celebrity beauty brand that started it all. Kylie Jenner couldn’t keep her Lip Kits in stock when she launched them back in 2015, and they’ve been popular ever since — not just with the Kardashian-Jenners, but also with the family’s famous peers.

Named after Kylie’s grandmother, the true red Mary Jo K shade might be the most popular of the lot; Christina Aguilera, Chrissy Teigen, Olivia Munn and Hailey Bieber have all worn the hot hue.

“I rarely wear lipstick but I love this Sisley color,” Sarah Jessica Parker told Who Australia in 2019 of this product, which the brand describes as “a tinted balm, colored like a lipstick and shiny like a gloss.” Aubrey Plaza’s rocked it on the red carpet as well.

In a 2018 Vogue “Beauty Secrets” video, Hailey Bieber completed her “California glow” with the matte version of in the shade Ballet ($55).

Denial of responsibility! Theinspi is an automatic aggregator around the global media. All the content are available free on Internet. We have just arranged it in one platform for educational purpose only. In each content, the hyperlink to the primary source is specified. All trademarks belong to their rightful owners, all materials to their authors. If you are the owner of the content and do not want us to publish your materials on our website, please contact us by email: [email protected] The content will be deleted within 24 hours.
Beauty makeup Page Six Style Shopping the best
Share. Facebook Twitter Pinterest LinkedIn Reddit Email
Previous ArticleMan sentenced to 130 years over Hawaii tourist murder released
Next Article Turn 10 Studios Gives A New In-Depth Look At Forza Motorsport