Following the death of the 96-year-old British monarch, John condemns the punk band activity which aims to cash in on her death with their song ‘God Save the Queen’, saying that it’s ‘tasteless.’

AceShowbiz –
John Lydon has made it clear that he wants to “distance himself” from any potential attempt of the Sex Pistols trying to “cash in” on the passing of Queen Elizabeth II. The 66-year-old former frontman of the punk band, who went by the alias Johnny Rotten, “wishes” to not be associated with any “activity” that seeks to profit from the death of the 96-year-old monarch as he feels it is disrespectful to those mourning her passing after more than 70 years on the throne.

A post on his official Twitter account read, “John Lydon wishes to distance himself from any Sex Pistols activity which aims to cash in on Queen Elizabeth II’s death. The musicians in the band and their management have approved a number of requests against John’s wishes on the basis of the majority court-ruling agreement.”

A follow-up tweet added, “In John’s view, the timing for endorsing any Sex Pistols requests for commercial gain in connection with ‘God Save the Queen’ in particular is tasteless and disrespectful to the Queen and her family at this moment in time.” A third post read, “John wrote the lyrics to this historical song, and while he has never supported the monarchy, he feels that the family deserves some respect in this difficult time, as would be expected for any other person or family when someone close to them has died.” 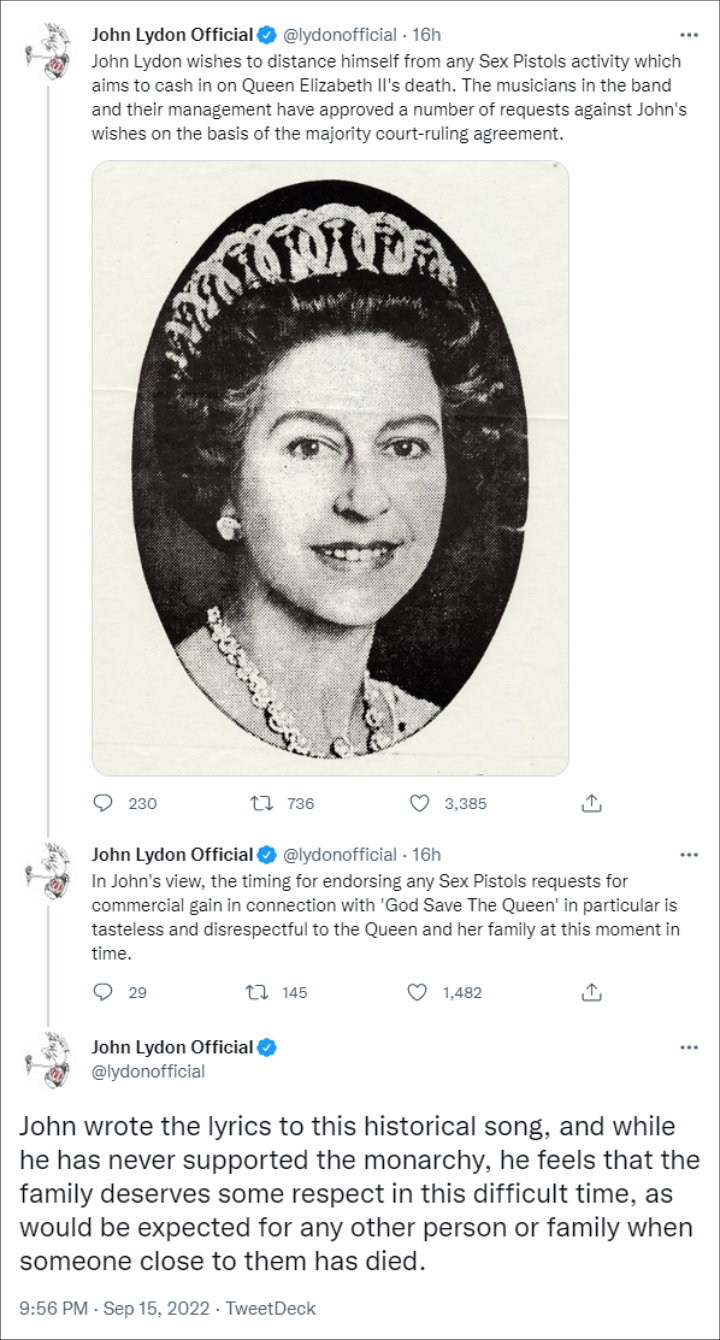 This is the latest clash with the “God Save the Queen” musicians after John was not successful in his legal bid to stop their music from being used in “Pistol”, the Danny Boyle-helmed Hulu series about their rise to fame in the 70s, where he cited an agreement made between Steve Jones and Paul Cook in 1988 that he believed barred it. A representative for the band – who released the song in 1977 during Her Majesty’s Silver Jubilee celebrations and was banned by the BBC after they called it “gross bad taste” – explained how they “cannot understand” what John was “referring to” as they had not plugged anything in connection to the Queen since her death on 8 September.

The band, whose past members also included Glen Matlock and Sid Vicious, told Pitchfork, “We cannot understand what he would be referring to. Other than a couple requests for use of imagery or audio in news reports on the Queen and her impact on culture, there’s nothing relating to ‘God Save the Queen’ being promoted or released in any way.”

Denial of responsibility! TheShockNews is an automatic aggregator around the global media. All the content are available free on Internet. We have just arranged it in one platform for educational purpose only. In each content, the hyperlink to the primary source is specified. All trademarks belong to their rightful owners, all materials to their authors. If you are the owner of the content and do not want us to publish your materials on our website, please contact us by email: hl.footballs@gmail.com The content will be deleted within 24 hours.
RELATED  Jennifer Lawrence Slams Erika Jayne as "Evil"
‘disrespectful’ about cash-ins claim elizabeth God Save the Queen john John Lydon lydon’s pistols Queen Elizabeth queen? react Respond Sex Sex Pistols Tasteless trending
Share. Facebook Twitter Email
Previous ArticleEverything Coming to Disney+ in October 2022
Next Article Mistakes Tourists Make While Visiting Los Angeles

Guy Ritchie Says He Had Zero Trepidations About Attending Saudi Event, Would Gladly Cast Will Smith in ‘Aladdin 2’ – The Shock News