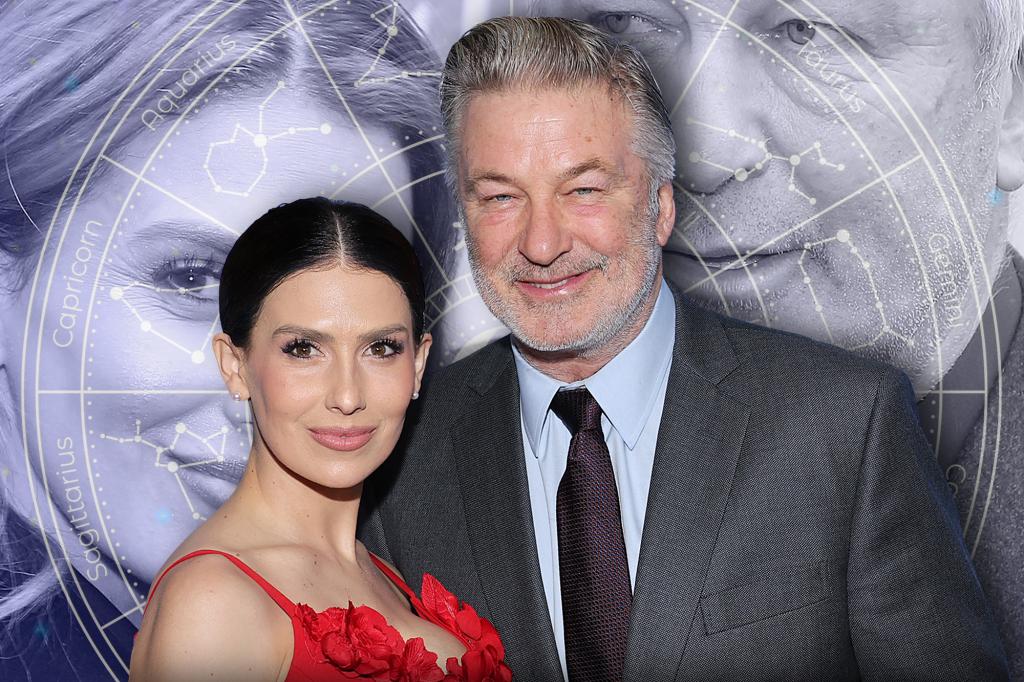 Alec and Hilaria Baldwin’s favor with fans and the public at large is indeed starting to “Rust.”

The celebrity couple, who have weathered haters of their biblical seven child brood and cringe worthy social media posts, have long been a source of controversy and the inspiration for eye rolls and head shakes.

In January, Alec was charged with involuntary manslaughter by authorities in New Mexico for his role in the on set shooting death of ‘Rust’ cinematographer Halyna Hutchins, although it has been decided that his leading role will not be re-cast in the American western film.

In the aftermath of Hutchins’s tragic death and conversations surrounding Alec’s accountability, Hilaria has come, often and vocally to her husband’s defense, even using her body to block photographers and distracting the press so her husband could exit their home without fanfare.

As their marriage faces yet another challenge we are taking a look at their respective birth charts to learn more. What astrological energy is stirred by and between this pairing? Read on to learn more about the stars, sun signs and gravitational pull of Hilaria and Alec Baldwin.

Born April 3, 1958, Alec is an Aries with his moon sitting opposite his sun in the oft imbalanced, desperate to be liked sign of Libra. Born January 6, 1984, 39 year old Hilaria is a Capricorn sun with a weirder than a box of hair, pretend to be Spanish for kicks Aquarius moon. In terms of modalities, Capricorn Hilaria and Aries Alec are both cardinal sun signs. Never subtle and rarely patient, always initiating, often instigating, cardinal signs are big on broad strokes and bold moves.

Case in point, upon first spotting then yoga instructor Hilaria at a NYC vegan restaurant (eye roll), Alec reportedly grabbed her hand and breathlessly exclaimed in the most Aries pick up line of all time, “I need to know you.” Alec’s Aries intensity/instability has also shown through in his voicemail outbursts at daughter Ireland, online sparring with detractors and fisticuffs with strangers over a parking spot.

The Baldwin’s sun signs are square one another, a potent aspect that equates to strong physical attraction and approaches to life that are at times deeply divergent. This is a passionate, strongly physical pairing but one that must leverage a divide and conquer over a compete and combust approach to love and long term goals. It would seem the couple has mastered this dynamic as they seem very much in step with and fully supportive of one another even and especially when the other has gone absolutely off the rails.

Hilaria’s Mars, planet of will and sexuality is conjunct Alec’s Jupiter, planet of expansion and abundance. If you’re wondering how and why this May-December romance resulted in seven kids, the evidence is underlined and bold face in this conjunction. The operative word here is more. These joined planetary forces are wonderful when it comes to building a familial fleet, in their case, with kids names inspired by Hilaria’s fake Spanish heritage and the Teenage Mutant Ninja Turtles, but all that expansive, unchecked energy can be detrimental to other areas of life.

Mars and Jupiter in cahoots equal an aiding and abetting vibe that indicates there’s no one pulling back on the reigns or roping in the crazy, a point made evident by their unfailing loyalty to one another’s delusions, Alec’s bizarre plea to fans to follow his wife on social media and Hilaria’s distract and deflect paparazzi techniques.

To the benefit of both parties, Alec’s sun in Libra trines Hilaria’s Uranus in Sagittarius. In astrology Uranus is the planet of sudden change and radical shifts, it’s punk rock, its unexpected, it doesn’t care about the status quo and it can leave all manner of calamity in its neon wake. The trine between these celestial bodies indicates that life between Alec and Hilaria is ever shifting. Their constant is flux itself and readjustment, recalibration and sudden restarts are part of their process. This bodes well for their ability to weather storms and face adversity as a united front but it also suggests that their combined energy courts chaos and expresses itself in erratic episodes and tone deaf social media posts. Checks out.

As the possibility of jail time and the damning court of public opinion hang over Alec, it would seem no matter the resolution of his criminal charges, he has a ‘for better or for worse’, crazy see crazy, ride or die, neigh, montar o morir, in his corner.

Astrology 101: Your guide to the stars

Astrologer Reda Wigle researches and irreverently reports back on planetary configurations and their effect on each zodiac sign. Her horoscopes integrate history, poetry, pop culture and personal experience. She is also an accomplished writer who has profiled a variety of artists and performers, as well as extensively chronicled her experiences while traveling. Among the many intriguing topics she has tackled are cemetery etiquette, her love for dive bars, Cuban Airbnbs, a “girls guide” to strip clubs and the “weirdest” foods available abroad.

Denial of responsibility! Theinspi is an automatic aggregator around the global media. All the content are available free on Internet. We have just arranged it in one platform for educational purpose only. In each content, the hyperlink to the primary source is specified. All trademarks belong to their rightful owners, all materials to their authors. If you are the owner of the content and do not want us to publish your materials on our website, please contact us by email: [email protected] The content will be deleted within 24 hours.
alec baldwin Astrology celebrity astrology Entertainment hilaria baldwin
Share. Facebook Twitter Pinterest LinkedIn Reddit Email
Previous ArticleOscar Nominations Analysis: The Biggest Winner of All Is — Wait for It — the Academy
Next Article Rita Ora sticks her tongue out after talking ‘throuple’ rumors and more star snaps