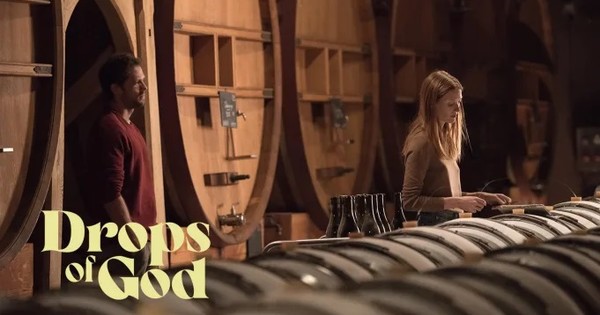 The entertainment industry news website Deadline reported on Monday that Apple TV+ has acquired Drops of God, the new internationally co-produced, multilingual live-action television series of Tadashi Agi and Shū Okimoto‘s The Drops of God (Kami no Shizuku) manga. The eight-part series will broadcast and stream worldwide simultaneously in 2023.

The official title in Japan is Kami no Shizuku/Drops of God. (Similar to the title in Japan for the second Fullmetal Alchemist television series, the live-action series’ title includes both the Japanese and English titles of the manga.)

Legendary Television is handling worldwide distribution outside of France and Japan. Hulu Japan will exclusively stream the series inside Japan alongside its world premiere. The series filmed over 10 months in France, Italy, and Japan.

The series is a collaboration between U.S., French, and Japanese companies. Legendary Television, Dynamic Television, France Televisions, and Hulu Japan are backing the project, and are producing the project with Adline Entertainment. Oded Ruskin (Absentia, No Man’s Land) is directing the series, and Quoc Dang Tran (Marianne, Parallel) wrote the scripts. Dynamic’s Klaus Zimmermann (Borgia, Trapped) is producing the series.

As previously announced, Tomohisa Yamashita (pictured left) and French actress Fleur Geffrier (Elle) star in the series. The announcement noted that Geffrier’s character is named Shizuku Kanzaki, the protagonist of the manga. A previous announcement noted that rival character Issei Tōmine would be the show’s protagonist, but an earlier report in 2021 from entertainment news service Variety described the series as having a female protagonist, with Geffrier playing the role.

Variety describes the story of the TV series:

The story involves a woman who discovers that her estranged father has left her the world’s greatest wine collection in his will. But, to claim her inheritance she must compete against a Japanese man who her father regarded as a son and may have been more.

Siblings Shin and Yuko Kibayashi — under the pen name Tadashi Agi — launched The Drops of God manga with artist Okimoto in Kodansha‘s Morning magazine 2004. A live-action series based on the manga aired in Japan in 2009. The manga ended in June 2014, and the 44th and final compiled book volume shipped in July 2014. The manga’s final arc, titled Marriage ~Kami no Shizuku Saishūshō~ (Marriage ~The Drops of God Final Arc~), launched in May 2015, and it ended in October 2020.

Comixology and Kodansha USA Publishing have released the manga in English digitally.

Throughout its serialization, the manga had famously boosted the sales of wines profiled in the story. The French wine magazine La Revue du vin de France has recognized the manga, giving it the magazine’s top award in 2010. The New York Times also profiled the manga in its Dining and Wine section in 2008.

Denial of responsibility! Theinspi is an automatic aggregator around the global media. All the content are available free on Internet. We have just arranged it in one platform for educational purpose only. In each content, the hyperlink to the primary source is specified. All trademarks belong to their rightful owners, all materials to their authors. If you are the owner of the content and do not want us to publish your materials on our website, please contact us by email: [email protected] The content will be deleted within 24 hours.
Share. Facebook Twitter Pinterest LinkedIn Reddit Email
Previous ArticleUS calls for once-a-year COVID-19 shots
Next Article ‘My heart is in Chinatown’: Business owners optimistic as crowds return for Lunar New Year parade – BC | Globalnews.ca