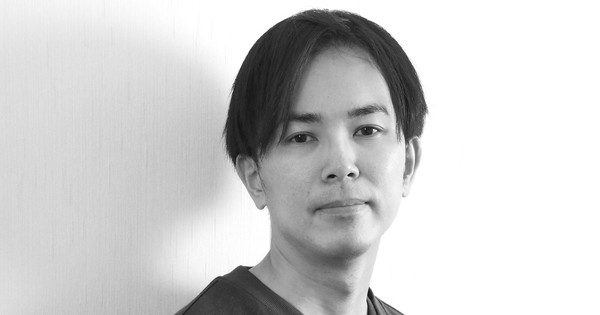 It’s no exaggeration that Hajime Isayama was a huge draw at Anime NYC. The event marked the Attack on Titan manga creator’s first-ever appearance in the United States and while enthusiasm for the anime is still going strong, it was hinted before he greeted his fans that Isayama was nervous. The manga had spent over 100 weeks on The New York Times’ Best-Sellers List and has sold over 100 million copies. These are impressive milestones for any work of fiction, but the manga series’ ending has remained controversial, a fact Isayama is well aware of.

Kodansha issued a statement from the manga creator on its Instagram page prior to the convention that read: “I am aware that the ending of Attack on Titan was quite controversial. I am open to receiving people’s honest opinions. However, I would appreciate it if you’d be kind to me.”

If Isayama was nervous walking onto the stage in The Javitz’s packed Special Events Hall, hopefully, the standing ovation put him at ease. I’ve attended a fair share of Japanese guest panels at conventions in the last ten years and have never witnessed a guest get a standing ovation, much less one with such thunderous applause.

Isayama was joined by Kodansha‘s Ben Applegate and TJ Ferentini, and translator Misaki Kido. The panelists’ and fan-submitted questions painted broad strokes over the 36-year-old creator’s career. Isayama shared that he first became interested in creating manga in elementary school after participating in a school recycling activity. The assignment allowed him to sift through manga magazines like Shonen Jump and sparked an interest in creating his own story. That desire would stick with him, but the formation of Attack on Titan‘s concept began to grow when Isayama saw the art piece “Kaiju” by Kiyoshi Yamashita, an autistic artist known as the “Japanese Van Gogh” who specialized in chigiri-e. 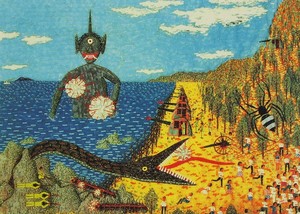 Yamashita’s “Kaiju” depicts humanity’s struggle against invading monsters, including an oni emerging from the sea, a giant serpent, and a gargantuan spider. Humans engage the creators with heavy artillery while others flee what appears to be a losing battle. Isayama found the image “really impactful” and it would inspire his early manga pilot, “Humanity vs. Titans.” He began pitching the concept to manga editors at 19 years old but felt his art wasn’t up to par for serialization. As he approached abandoning his prospects at manga creation, he decided to try one more magazine. It was here that Isayama met editor Shintarō Kawakubo.

“He was the first person to say it was good. I was happy but I thought, ‘is he for real?’ I had my doubts at the time,” Isayama told the crowd. Isayama has previously commented on what he perceived as his lackluster artwork in the series. For the next six months, Isayama spent every waking moment thinking about the story, but he also had concerns about getting axed.

“I would say 80 percent of manga is canceled after two volumes and you might not get the initial investment that you put into the story back,” he said. He recommended that aspiring artists go all out because if your odds of failing are high, you might as well go big and fail big in pursuit of fulfilling your dreams.

Isayama shared additional tidbits about his character-creation process. Foremost, he creates characters to serve the story he has in mind and starts by drawing their appearance. Some characters are also influenced by television and movies, for example, Gabi was inspired by Arya Stark from Game of Thrones, and Falco was inspired by Jesse Pinkman from Breaking Bad.

The panel proceeded like plenty of Japanese guest Q&As, but its biggest moment all came back to the original comment shared on Instagram and the underlying unease about the manga’s ending. For context, Isayama has appeared in Japanese television programs in the past that frankly showed his anxiety about creating the manga’s ending. In one program Isayama was described as “bearing the burden of wanting to live up to fan expectations but also to go against them.” He was sleeping only two to three hours a day. He felt unable to draw and the documentarian noted that he only smiled once during filming—when he took a break to play a video game.

When the panelists asked if Isayama always knew how the series would end, the audience responded with ominous murmurs. Isayama referred back to the painting by Yamashita.

“This is what I wanted to do. From the very beginning, I knew where this series would land but details like how the main character would get there weren’t determined.”

Isayama credited voice actor Yuuki Kaji for influencing the manga’s portrayal of Eren as more of a “good guy” and Isayama needed to steer the direction of the story in order to make it convincing to readers.

“I still have my doubts within myself if I did it right,” Isayama said. “I still struggle with this point and I’m really sorry about it.”

Moved by his uncertainty, a voice broke out “we love you!” and like opening the floodgates, fans rose to their feet to cheer Isayama on with thunderous applause. The creator reacted with a hand over his heart before replying, “I’m trying not to cry.” The emotional moment permeated through the rest of the panel. There were further hints of the lasting effect working on the series had on its creator. When asked if he will make a new manga, Isayama responded frankly, “No. Sorry.” When Ferentini asked him, “what does freedom mean to you?” he responded again simply, “I don’t know.”

Isayama ended the panel with gratitude for his fans for reading the manga and believing in him when no one else did. He shared that his family and friends doubted him and so he’s grateful for the fans who stuck it out.

“When I was carrying those heavy feelings and was in a rut for a long time until about yesterday. I had signings and got to talk to fans one-on-one and many told me the ending was awesome. Those kind words really hit me and I feel great gratitude to come to NYC and to meet you all. It was a great experience for me.”

Anime News Network was able to sit down with Isayama before his panel and discuss his life, favorite TV shows, and plans now that the Attack on Titan manga has ended.

ANN: What’s life been like after finishing a lengthy serialization? Is there anything you can catch us up on now that you have more time?

Hajime Isayama: I have something family-related going on. That keeps me pretty busy. I still don’t have too much time for myself.

ANN: Attack on Titan‘s success has brought you into contact with many popular creators. Is there anyone who gave you important advice or helped you continue to grow as a creator?

ISAYAMA: One of the people that I can think of is [Flowers of Evil manga creator] Shūzō Oshimi. He is also a manga creator that I have worked with at the same publisher. One day he told me, “Isayama-san, you’re really sadistic.” And I said, “Am I?”  He might be right. What he told me really rang a bell in my head. And I really appreciated his honest and truthful perspective that he shared with me. That has continued to support me that, among the creators, I can be that open with somebody else.

ANN:  Is there a defining moment that stood out to you as “My work is larger than life now?”

ISAYAMA: Yeah. Especially when my work became an anime, that’s when I really felt like it has become larger than my life. Because the characters kind of start to develop on their own depending on the voice actors’ acting skills. It became quite different from what I originally imagined them to be. So I kind of treat them like “that Eren,” which is different from my version, but I also recognize it as a different version of the character.

ANN: After creating an international hit, do you feel any pressure or expectations to reach that level for your next work?

ISAYAMA: So actually there’s no pressure. If I think it’s not going to be exactly the same, as good, or as interesting as Attack on Titan, if I don’t compare myself to the previous work, I don’t have to feel the pressure. So maybe I’ll be able to write a totally different story.

ANN: With the later seasons of Attack on Titan anime, you’ve had more opportunities to participate in the production. Are there story adjustments you wanted to make for the anime adaptation?

ISAYAMA: One example, I can think of is when Attack on Titan became an anime series, when they introduced the vertical maneuvering equipment, I wanted the design to be more improved by the time it became an anime. That was a request that I had put to the anime team. Later I realized that was a very difficult request that I have put in and I felt really bad later.

ANN: How much historical research did you do for Attack on Titan? And do you consider history to be an interest of yours?

ISAYAMA: I love history very much. When I started working on Attack on Titan, I did a lot of research on the German cultures from 2,000 years ago. Details like clothing, are the things that I really looked into. And I also really like the ancient Europe that gets introduced in works like Game of Thrones, I enjoy those very much. Another area of interest is Great Britain during ancient times. That’s also an era that interests me.

ANN: You’ve spoken before about how the walls in Attack on Titan were inspired by your hometown in Oita Prefecture. Are there any other locations in the world that you’ve seen that makes you think, “that’s inspiring?”

ISAYAMA: So my hometown in Oita is a very secluded and isolated place. It’s like a flatland surrounded by mountains. So I feel like that was kind of my inspiration for the walls that appear in Attack on Titan. Another one that I can think of is one of Aso Caldera. The appearance has definitely inspired me to think of the image of seeing from the top of the wall and looking down. And also there’s a part of the mountain that kind of looks like the reclining Buddha.

ANN: What television shows have you been watching lately? I heard you’re really into Disney+ programming.

ISAYAMA: I do subscribe to a lot of TV streaming services.  I have been watching a lot of things on Disney+, but honestly, I started to get a little bit tired of Marvel. I think I watched the first episode of She-Hulk. I definitely do go around to every streaming service to watch what interests me. One of the series that I’ve been following recently is Barry. It would be too many if I start to name them all, I’m sorry.

Denial of responsibility! Theinspi is an automatic aggregator around the global media. All the content are available free on Internet. We have just arranged it in one platform for educational purpose only. In each content, the hyperlink to the primary source is specified. All trademarks belong to their rightful owners, all materials to their authors. If you are the owner of the content and do not want us to publish your materials on our website, please contact us by email: [email protected] The content will be deleted within 24 hours.
Share. Facebook Twitter Pinterest LinkedIn Reddit Email
Previous ArticleYour Anime Rankings – Best of Fall 2022, Nov 19-25
Next Article Interview: Denji, Aki, Power, and Makima Dub Actors Discuss Smash-Hit Anime Chainsaw Man