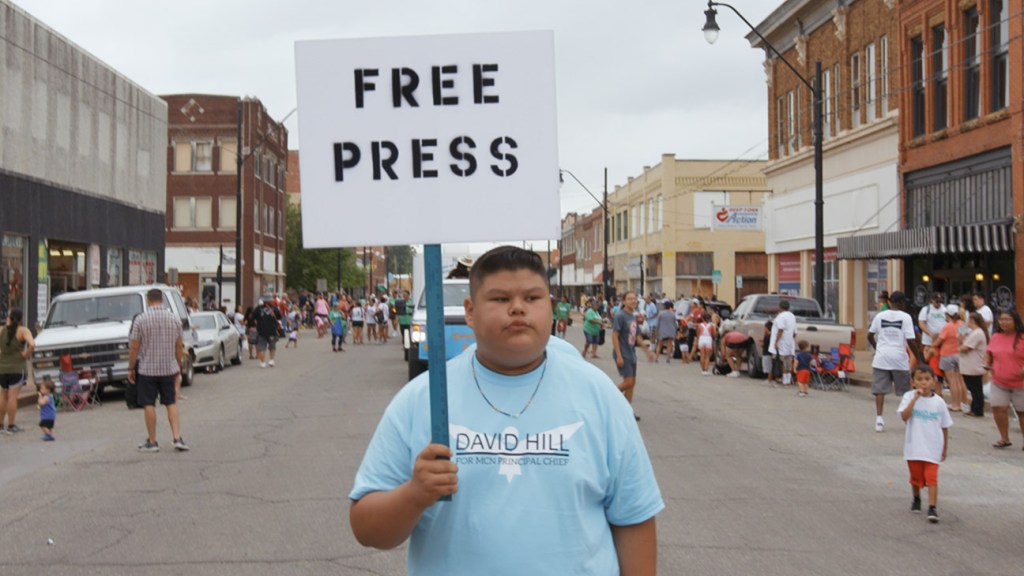 Freedom of the press — what most Americans assume to be an unalienable right guaranteed by the First Amendment ever since it was ratified back in 1791 — does not, in fact, apply to everyone living within the United States. If you did not know that (and this reviewer definitely didn’t), then what happens in the new documentary Bad Press, which premiered in competition at Sundance, will be of vital interest to you.

Set on the Muscogee (Creek) Nation reservation in Oklahoma, where Federal rules like the First Amendment are not applicable, the film follows a handful of passionate Native American journalists who find themselves propelled into a fight with local authorities when they demand that freedom of the press be written into tribal law.

Not all truths are self-evident.

What ensues is a long battle that has all the trappings of a small-town political thriller: corrupt officials, refuted elections, reporters fighting for their rights at the risk of their own livelihoods… It’s a story we’ve seen before, but never in this kind of setting. Even if the Muscogee live under separate laws, they are clearly not immune from the kind of struggles being waged around the rest of the country right now, at a time when people are putting themselves on the line so that the truth can prevail.

It all started in 2018 when journalists at Mvskoke Media — “Mvskoke” is the phonetic spelling of the Muscogee tribe in its original language — a local paper and news service that had been reporting on tribal events for decades, learned that the 1979 “Free Press Act” guaranteeing their protection was going to be repealed by the powers-that-be.

Why that happened becomes clear once we dig further into the hard-hitting work that Mvskoke Media reporters such as the outspoken Angel Ellis, who is very much the heroine of Bad Press, had been doing for years: uncovering embezzlement scandals and other cases of fraud among politicians, including members of the Muscogee (Creek) National Council and the Principal Chief himself, who serves as the tribe’s elected president.

Directors Rebecca Landsberry-Baker and Joe Peeler use Ellis’ fight as an entry point to briefly explore the history of independent newspapers on Native American land, where freedom of the press was not ensured by a single constitution of the 500-plus tribes that currently exist in the U.S. It’s a reality that Ellis and her colleagues, including Jerrad Moore, who produces and directs news segments, and Gary Fife, who hosts a radio show, decide to finally question when their jobs are put in jeopardy.

Following the 2018 repeal, the tribal government guts Mvskoke Media of the protections it once had, demanding it focus more on positive stories about the Nation. “We need to call ourselves a public relations department if we’re not doing the news,” Ellis says, while later quipping about how they’ve basically been asked “to put out polished turds every day.” After a dozen employees quit the news service, Ellis decides to take her fight to the National Council, demanding that a free press statute be finally written into the constitution, which would make it a first for a Native American tribe.

The plot thickens when elections for the next Principal Chief come around, with some candidates in support of the measure and others adamantly against it. The power politics, even in such a close-knit community as the Muscogee (Creek) Nation, become evident, and the fact that there’s no newspaper to explain what’s really happening poses a major problem.

It would be unfair to spoil Bad Press by saying how the elections turned out. Suffice to say that, in what has become the rulebook ever since President Trump’s reign, results are discredited, ballots recounted and the validity of tribal governance thrown into play. That the fate of the reporters at Mvskoke Media will be decided by an election they themselves could not adequately report on is a disturbing irony lost on no one.

Landberry-Baker and Peeler’s documentary is thus the perfect illustration of what happens when you dismantle the powers of the Fourth and Fifth Estates and wind up putting democracy in peril, and it’s something everyone in America should be worried about. Thankfully, there are journalists like Ellis around to expose the truth and fight for it, even if they risk much in the process. But as a Muscogee man matter-of-factly tells the reporter early on: “If people are not liking you, then you’re doing your job.”

Denial of responsibility! Theinspi is an automatic aggregator around the global media. All the content are available free on Internet. We have just arranged it in one platform for educational purpose only. In each content, the hyperlink to the primary source is specified. All trademarks belong to their rightful owners, all materials to their authors. If you are the owner of the content and do not want us to publish your materials on our website, please contact us by email: [email protected] The content will be deleted within 24 hours.
Share. Facebook Twitter Pinterest LinkedIn Reddit Email
Previous Article‘Magic Mike’s Last Dance’ Premiere Photos: Channing Tatum, Salma Hayek & More
Next Article Chinese engineer sentenced to 8 years in US prison for spying | CNN Politics