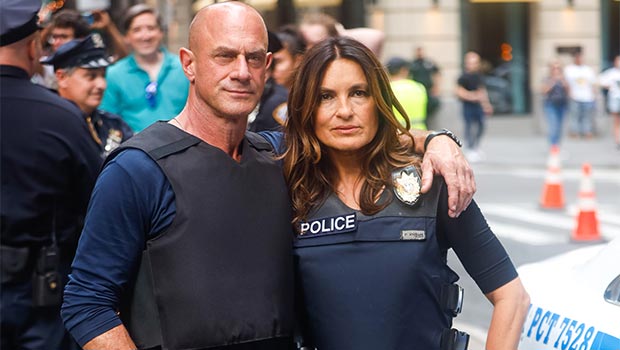 Some actors simply do not kiss and tell, but on Jan. 24, Law & Order: SVU star Christopher Meloni, 61, took to Twitter to make some kissing jokes ahead of Thursday’s Mariska Hargitay, 59, possible hookup episode. At first, a fan wrote to ask Chris how he and his longtime co-star met, to which he replied, “I’m glad you asked. I had a screen test audition for a new show called Sex Crimes and when I walked thru the door…” But it wasn’t until an admirer told the 61-year-old that he and Mariska lacked chemistry that things got really cheeky.

“Idk y’all don’t have ANY chemistry. Maybe it should have been [John] Slattery instead,” the follower quipped. It was then only a matter of time until Chris clapped back. “I’m not kissing John slattery,” he wrote back regarding the Mad Men alum. The kissing commentary comes just days after Law & Order: SVU released a teaser clip of the Jan. 26 episode where he and Mariska nearly share a kiss before the teaser comes to an end. “The moment we’ve all been waiting for. Don’t miss new episodes of #LawAndOrder, #SVU, and #OrganizedCrime Thursday at 8/7c on @NBC and streaming on @peacock,” the tweet read.

The moment we’ve all been waiting for. Don’t miss new episodes of #LawAndOrder, #SVU, and #OrganizedCrime Thursday at 8/7c on @NBC and streaming on @peacock. pic.twitter.com/H1Cpycd7eo

In addition to the spicy tweets, Christopher appeared on the TODAY show on Jan. 25, where he was grilled by Savannah Guthrie, 51, and Hoda Kotb, 58, about whether or not he actually ended up kissing his co-star. “We need to go Law & Order on you,” Savannah joked. “Sir you were there, you were in the apartment you had the motive and you had the means… your lips.” She then asked, “Did you or did you not kiss her?” After a bright spotlight shined on Chris he put on a poker face and said, “I want my lawyer.”

Later on, he told the outlet how he and Mariska prepared for the steamy episode. “What did we do different? There’s nothing too different,” he began. “When you’ve been friends and co-workers and the kind of relationship that we have… you’re presented with what the scenes about and you get in there.” He also noted that it was “an interesting scene” to film along with calling it a “delicate scene.” He also called it “awkward” and “difficult”, but made sure to note, “but that’s all good.” Finally, at the end of the video he joked that he “popped a breathe mint” before stepping foot onto the scene with the brunette beauty.

Aside from work and possible kissing scenes, the mom-of-three took to social media on Jan. 24, to reveal that Chris had sent her some amazing flowers for her birthday. “Hey Chris, you asked me if I knew what day it was yesterday and I wasn’t sure,” she began in the Instagram clip. “But then I figured it out because I got these pretty flowers from you!” Her clip was notably in response to Chris’ from Jan. 23 where he wished her a happy birthday. “Celebrate it Marsha,” he captioned the post. Both of the actors have starred in the hit series since 1999.

Christopher Meloni’s Wife: Everything To Know About Sherman Williams & Their 27 Year Marriage

Denial of responsibility! Theinspi is an automatic aggregator around the global media. All the content are available free on Internet. We have just arranged it in one platform for educational purpose only. In each content, the hyperlink to the primary source is specified. All trademarks belong to their rightful owners, all materials to their authors. If you are the owner of the content and do not want us to publish your materials on our website, please contact us by email: [email protected] The content will be deleted within 24 hours.
Share. Facebook Twitter Pinterest LinkedIn Reddit Email
Previous ArticleKieron Pollard’s Acrobatic Catch Near Boundary Line In International League T20. Watch | Cricket News
Next Article FA Cup: Manchester City Face Arsenal Showdown, Liverpool Eye Revenge vs Brighton | Football News