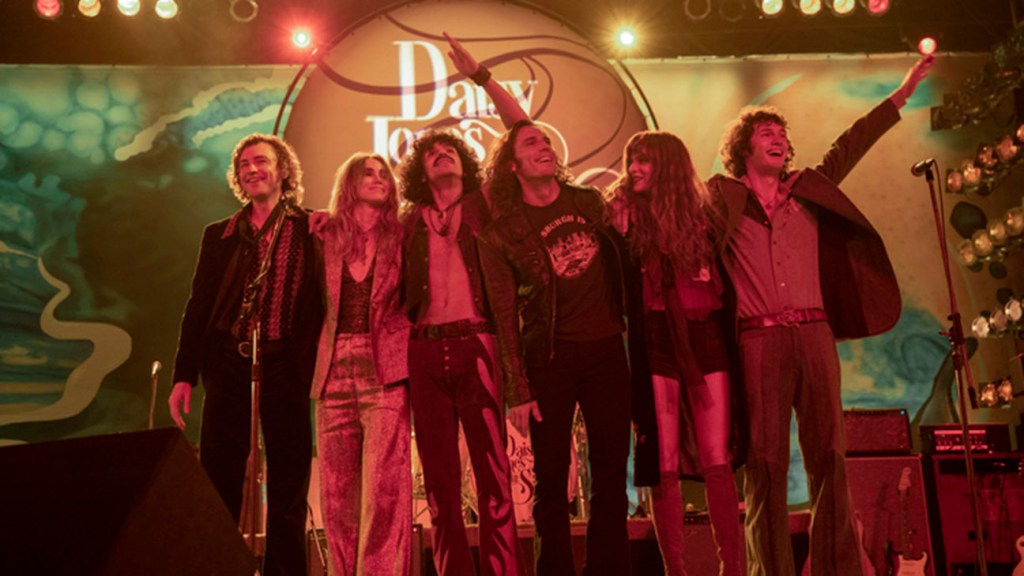 The first look at Daisy Jones & The Six has arrived.

Prime Video released Wednesday an official teaser trailer for the upcoming series starring Riley Keough and Sam Claflin, featuring the first listen of “Regret Me,” one of 24 original songs written exclusively for the series and recorded by the cast.

Based on the best-selling novel by Taylor Jenkins Reid, Daisy Jones & The Six chronicles the rise and fall of a renowned rock band in the 1970s fronted by Daisy Jones (Keough) and Billy Dunne (Claflin). Despite achieving superstardom and success, the band unexpectedly breaks up, only sharing what caused them to implode decades later.

In the teaser trailer, the band’s rise to success is detailed from hitting the road and recording studio to being swarmed by fans. However, things go south, which eventually leads to the band’s demise.

“Look, I know that I said that I would tell you everything. But how much of everything do you really want to know?” Keough’s Daisy asks.

Daisy Jones & The Six is executive produced by Reese Witherspoon and Lauren Neustadter for Hello Sunshine and Brad Mendelsohn for Circle of Confusion.

The series will feature original songs written and produced by Grammy-nominated producer Blake Mills based on song lyrics written by Reid in the novel. The original music will be released by Atlantic Records during the rollout of the series, with new episodes released every Friday through March 24.

Daisy Jones marks the first of the Reid book universe to hit the screen. Out of her eight published books, four of Reid’s books are getting the adaptation treatment. Apart from Daisy Jones & The Six, her best-selling novels The Seven Husbands of Evelyn Hugo, One True Loves and Malibu Rising are also expected to jump from the bookshelves to screen.

With The Seven Husbands of Evelyn Hugo, Daisy Jones & The Six and Malibu Rising, Reid has transported readers to the 1960s, ’70s and ’80s, while exploring Hollywood and pop culture. In Daisy Jones, Reid tells the story of a band that defined a rock ‘n’ roll era while delivering a story resembling a VH1 Behind the Music special.

“What’s been really great about Daisy Jones, in particular, is, again, talk about dream collaborators! To be able to hand that over to Reese Witherspoon and the team at Hello Sunshine and to have gotten Scott Neustadter and Michael H. Weber and Will Graham writing it and heading that piece of it has been just creatively gratifying,” Reid told The Hollywood Reporter. “Riley Keough and Sam Claflin as Daisy and Billy just feels so perfect.”

Daisy Jones & The Six was also selected as a monthly pick for Witherspoon’s book club.

Denial of responsibility! Theinspi is an automatic aggregator around the global media. All the content are available free on Internet. We have just arranged it in one platform for educational purpose only. In each content, the hyperlink to the primary source is specified. All trademarks belong to their rightful owners, all materials to their authors. If you are the owner of the content and do not want us to publish your materials on our website, please contact us by email: [email protected] The content will be deleted within 24 hours.
Share. Facebook Twitter Pinterest LinkedIn Reddit Email
Previous ArticleChelsea Handler ‘didn’t know’ she was on Ozempic: My doctor ‘hands it out’
Next Article Hogwarts Legacy Features More Than 100 Side Quests