Dior’s Haute Couture Show Is All About Josephine Baker 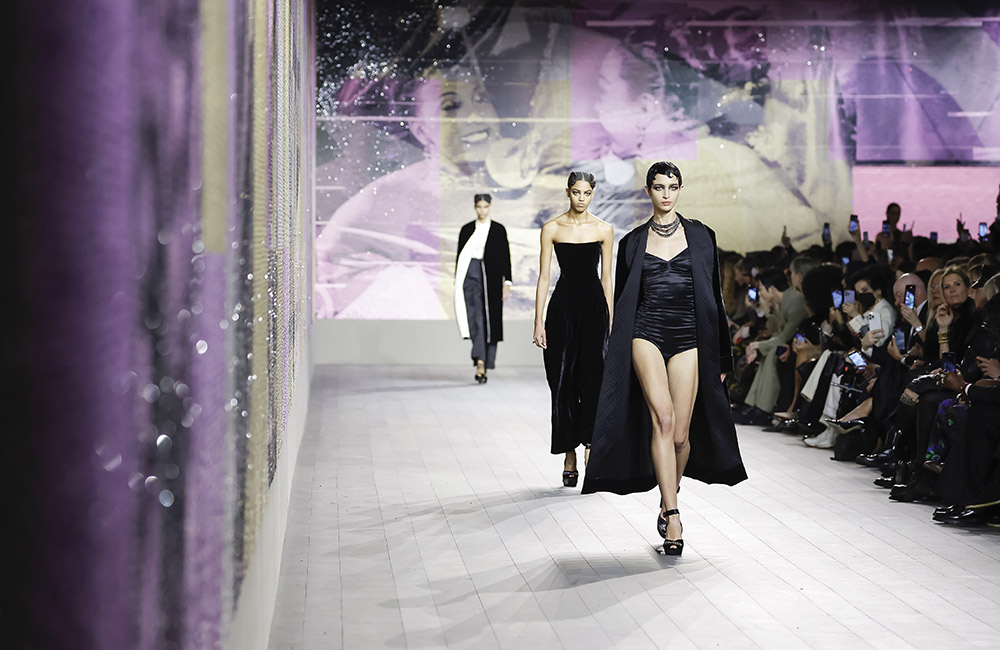 At the Musée Rodin, on a frigid cold Jan. 23 with highs in the 30s, the House of Dior unveiled their Spring Summer 2023 Haute Couture collection.

In a packed room of celebrities, buyers, media, top clients, and friends of the brand, creative director Maria Grazia Chiuri unveiled a sartorial story inspired by American singer Josephine Baker. It was a presentation that paid homage to the breaking of racial barriers, which artist Mickalene Thomas sought to capture in the show’s staging. The room was surrounded by large images on the walls of Baker and other icons from Dorothy Dandridge, Eartha Kitt and Nina Simone to pianist Hazel Scott and models Naomi Sims and Donyale Luna.

Sitting front row were film director Baz Luhrmann and his Oscar-award winning costume and producer designer wife Catherine Martin. The Elvis director said of the collection, “It was elegant and glamorous and beautiful. The designs in the collection are a part of the DNA of modern fashion and it’s good to see the house tapping into that.”

The Menu star Anya Taylor-Joy, who is a global brand ambassador for the house and wore Dior to the recent Critic’s Choice Awards and the Golden Globes, told The Hollywood Reporter, “I loved the collection. I hadn’t heard anything about it before I came in and the second I saw Eartha Kitt I got really excited, I was not disappointed. The Josephine Baker references were beautiful, it’s a fun collection.”

Many creations in the new collection are inspired by Baker as well as her cozy and intimate dressing room where she stayed before going on stage. The first look was a lingerie bodysuit with a long silk velvet robe. In some ways, these intimate looks are very un-Dior like, but Chiuri really went there. One stand-out was a slate gray dry-handle wool coat over ecru satin blouse and pleated skirt in silk shantung with chain print, while embroidery on coats brings vitality to textiles. “The suits and coats pay tribute to the masculine fabrics dear to Monsieur Dior, stated the house in show notes.

Grown-ish star Yara Shahidi, one of Dior’s beauty ambassadors, was also taken by the nod to Baker. The actress wore a Baker-inspired look by Dior to the Met Gala in 2021. “I loved it,” she said of the collection. “My last big collaboration with Dior … was an ode to Josephine Baker at The Met, so it was so beautiful to see … how the house continues to look towards and be inspired by Black women.” Shahidi also noted the fashion house’s historical association with Baker. “Their history of supporting Baker during her actual tour and clothing her at the time shows they have a very real lineage with her work and it makes it so exciting,” she said.

In show notes, the fashion house elaborated on the choice of Baker as inspiration: “The photographs of Baker, whose energy is emphasized by their black and white tonality, compose a form of sartorial biography (capturing her as a dancer, entertainer, member of the French Resistance, civil rights activist for the African-Americans, humanist and universal benefactress), the exemplary story of a pioneers.”

Paris Haute Couture week for the SS23 season carries on through Jan. 26.

Denial of responsibility! Theinspi is an automatic aggregator around the global media. All the content are available free on Internet. We have just arranged it in one platform for educational purpose only. In each content, the hyperlink to the primary source is specified. All trademarks belong to their rightful owners, all materials to their authors. If you are the owner of the content and do not want us to publish your materials on our website, please contact us by email: [email protected] The content will be deleted within 24 hours.
Share. Facebook Twitter Pinterest LinkedIn Reddit Email
Previous ArticleBrendan Fraser Shocks ‘The Mummy’ Fans by Crashing London Screening: ‘This Film Was Made in Britain. Be Proud!’
Next Article Justin Simien’s Culture Machine Aims to Help Filmmakers Navigate the Business with ‘Not Another Diversity Panel’ at Sundance