Does Toradora Hold Up Today? Every anime fan remembers the first time a show spoke to them on a deeply emotional level. For me, that was the 2008 romantic comedy anime Toradora!, which I discovered through an AMV I randomly came across all the way back in high school. It was the first anime to make me cry more than once, and it was also one of the first shows that made me a fan of the slice-of-life/romance genre of anime. But does it still elicit that emotional response in me many years later? Or has the nostalgia finally worn off?

Right from the beginning, Toradora! opens with a promise as two high-schoolers monologue about how there is something extraordinary in this world that everyone is looking for. That something is never explicitly named, but within the first 10 minutes, you get an idea about what kind of show you’re in for. We have a kind-hearted yet scary-faced teenage boy in the form of Ryuji and an abrasive girl named Taiga who is short both in temper and stature, earning her the name of the “palmtop tiger.” Both of these awkward teenagers have crushes on the other’s respective best friend, and through the power of teamwork, the two will help each other to secure the affection of the other.

Yes, one of the biggest complaints often lobbed against Toradora! is that it is overly predictable. You know the exact start and endpoint of the romantic developments between all of the main cast members, leaving things unsurprising. However, I don’t see Toradora!‘s predictability as a negative since, much like its two protagonists who are often judged more for their looks and disposition rather than the actual merits of their character, the show isn’t actually about making sure that our two leads get married at the altar by the end. 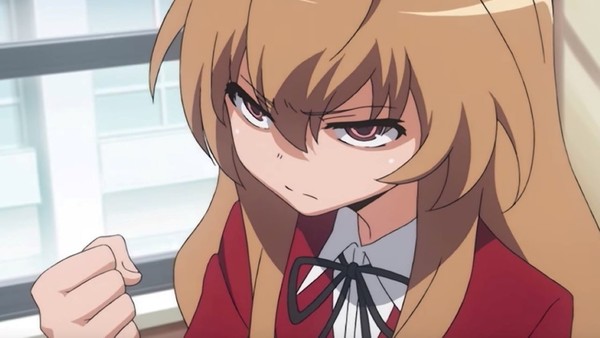 This will sound like a gross oversimplification, but there are broadly two different types of slice-of-life anime. The first type usually comprises shows that focus on the magic of normal hobbies or everyday activities that people might take for granted, like K-ON!, Laid-Back Camp, and Silver Spoon. These shows can have excellent character writing and comedy. Still, by virtue of their focus on a particular activity, they can also feel like comfort food at times: warm, familiar, and unchallenging. The second type revolves around a character’s transition from one point in life to another, like March comes in like a lion, Barakamon, Fruits Basket, and Toradora!. While both types have distinct appeals – and some shows cannot be neatly categorized into either type – I always find myself drawn to the latter because I like seeing change. I like seeing the effects that different circumstances and environments can have on people because everything is constantly changing, whether we like it or not. Sometimes we don’t notice those changes until it’s too late. Still, recognizing those everyday aspects of our lives or watching somebody else go through distinct yet relatable struggles can inadvertently help us realize who we are or what we want as individuals.

So what are Ryuji and Taiga going through exactly? At the risk of sounding cliché, they’re learning to figure out who they are. The show opens with gags about how our two leads are not who everyone thinks they are, but that gag gets less and less funny as the series continues. Ryuji looks the way that he does because he inherited his deadbeat father’s signature scowl. It’s an overplayed trope even around the time the show came out. Still, unlike other shows that would stop at using this as an excuse to make the main character a loner, Ryuji’s outward appearance carries legitimate thematic weight in being judged as a thug is the only gift that he ever got from his father. He overcompensates to try to be better than that.

Similarly, Taiga is more complex than just another Rie Kugimiya-voiced tsundere. I don’t think calling Taiga a tsundere is entirely accurate because her prickliness isn’t a front she uses to hide her emotions. She’s very jaded by nature, which comes from trying to distance herself from a very difficult family situation and exist independently despite being kind of bad at it. The only thing that she thinks she’s good at is being direct, even if she’s probably one of the most selfless characters in the show. When she does use her abrasiveness to hide her feelings, it’s usually for someone else’s sake, not to get a comedic or confusing rise out of the audience like the trope is traditionally known for. 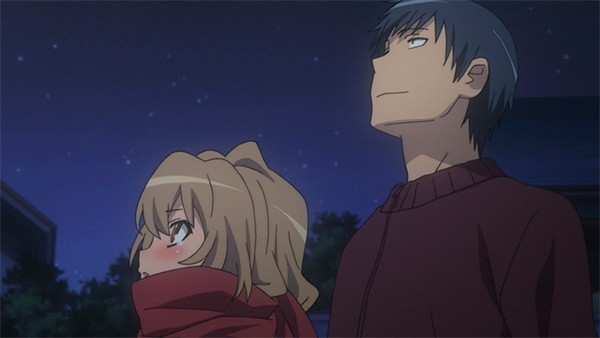 Both of these characters feel like they have something to prove to the world because they both relate to the experience of not being treated the way they want. Living like that isn’t easy at any age, but it can get especially rough for teenagers. Don’t get me wrong: Ryuji and Taiga still get their fair share of comedic moments and hijinks, but there are always character realizations happening in the background, and once Toradora!‘s thematic framework becomes clear, we start to see the way these two perceive their families, their respective crushes, and even the new friends that they make in a new light. Toradora! grabs your attention with something fundamental but slowly reveals its true self as it continues, like almost every central cast member.

Toradora!‘s tone never gets too self-deprecating or cynical, thanks to its gorgeous presentation. The character designs are vibrant and always on-model, with occasional moments of impressive sakuga. But the direction is where the show shines, making great use of lighting and shot composition to emphasize the loneliness these characters feel when they think no one understands them. It’s done the best with Taiga, and as an aside, I’ve always loved the way her hair was animated during certain scenes.

By the end, the big climax isn’t just some grand romantic confession—it’s also primarily a realization of the self. While Ryuji and Taiga had to deal with unfortunate circumstances and are trying their best to be looked at the way they want to be looked at, that doesn’t necessarily mean that they themselves are who they think they are. They’re not adults who have everything figured out, even if they’ve had to mature faster than usual to get by. They are both still incredibly naïve, stubborn, and shortsighted, making them have a lot more in common with their families and friends than they might’ve initially thought. By the end, these two are only beginning to realize who they are as they transition into adulthood. The start and endpoint of their stories may have been evident from the start, but how Toradora! walks that path is rarely a straight line. A lot of romance and romantic comedy anime today have forgotten this fundamental idea that characters can experience individual growth on top of relationship progression. They focus so much on highlighting the chemistry between their leads that the characters become stagnant. It becomes less about watching characters grow and change and more about waiting for them to realize that they should’ve been together from episode one. These shows can be fun, but they always run the risk of drawing things out. When you have a show like Toradora! that focuses more on the characters growing and coming to realizations about themselves, which feeds into genuine chemistry between each other, it leads to a much more fulfilling story overall.

I think that’s why Kaguya-sama: Love is War blew up in popularity the way it did. Yes, it has a funny premise, but there’s always a little character work and backstory being fed to you in the background, leading to a much more layered experience as the show continues. I’m not saying Toradora! did this first or even that it’s the best example. Still, it’s a testament to how well it highlights that theme of perception versus reality, what it means to be an adult, where affection comes from, and so many other ideas from a straightforward and predictable premise. 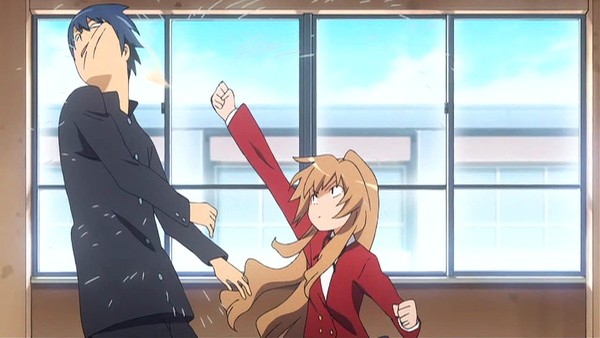 Toradora! is the show that highlighted to me that the slice-of-life and romantic comedy genres in anime can be so much more than the boring high school dramas that many people make them out to be (even though I can’t fault them because a lot of shows still sort of do just that). They can be about recognizing those relatable changes you’re still going through as an adult. At their best, they can provide the reassurance that it’s OK to make mistakes or take time to realize what needs improvement. But most importantly, Toradora! does a great job of highlighting that you never have to go at everything alone. Our protagonists started as loners looking for something gentle and beautiful in this world, only to realize by the end that this special something isn’t something that can be found but needs to be built.

Toradora! will always hold up to me because I’m still building that special thing as I approach my 30s. I’m still discovering things about myself and wrestling with preconceptions about my character, both from those around me and internally. It’s very easy to get so caught up in everything and be stubborn like some of these characters, thinking you are the smartest person in the room and that everybody else needs to grow up. But as Toradora! demonstrated, the moment you think you’ve reached the end of maturity is probably when you need to grow up the most; that’s why I still manage to cry a few times watching this series for what feels like the 15th time over 11 years. It’s not because I am sad because something tragic happened or it’s over. I do it because I’m just so overcome with happiness at the reminder that I still have room to grow. I’m overwhelmed by being reminded that I’m not alone and that the end of this story is only the beginning of a much larger journey. It’s okay if I am alone in thinking that, but what can I say? I still remember it all, just like my first time.

Denial of responsibility! Theinspi is an automatic aggregator around the global media. All the content are available free on Internet. We have just arranged it in one platform for educational purpose only. In each content, the hyperlink to the primary source is specified. All trademarks belong to their rightful owners, all materials to their authors. If you are the owner of the content and do not want us to publish your materials on our website, please contact us by email: [email protected] The content will be deleted within 24 hours.
Share. Facebook Twitter Pinterest LinkedIn Reddit Email
Previous ArticleYour Anime Rankings – Best of Fall 2022, Dec 3-9
Next Article Orientalism & Occidentalism in Anime