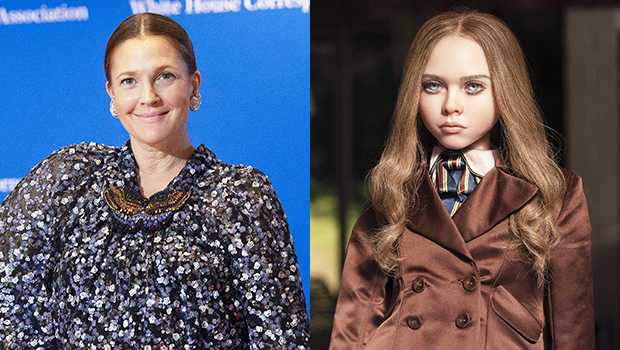 Forget Drew Barrymore, meet DR3W Barrymore! The iconic actor and talk show host, 47, channeled her horror acting days on Tuesday, Jan. 24 during a horrific and hilarious episode of The Drew Barrymore Show for which she transformed into M3GAN from the viral horror movie of the same name that debuted on Jan. 6. Drew dressed up as the creepy, demonic A.I. doll to interview Allison Williams, who stars in the box office hit. Allison, 34, could barely hold it together after she told Drew the “number one rule” of being “a true M3GAN”: running on all fours. Sure enough, Drew got down on her hands and knees and darted across the stage.

Allison then got super disturbed when she saw that Drew’s pale blue contacts had shifted in her eyes. The Santa Clarita Diet actress then went to fix her contacts, making Allison squirm in her seat and look around at the laughing audience. To add to the humor, Drew pretended to glitch.

Getting a bit more serious, Drew asked Allison if she knew the movie would be such a hit and break $100 million in revenue at the box office. “Obviously, M3GAN,” Allison began, playing along with the bit. “We never know how these things are going to go, but you can hope for a certain outcome.” She then humbly gave M3GAN all the credit for the movie’s success. “People loved M3GAN and they got her, that’s why,” she stated.

Clearly pleased by the praise, “M3GAN” got up and began to do the viral M3GAN dance from the film, which earned her a huge cheer from the audience. Drew also recreated the silly dance in a backstage video her team shared on the show’s Instagram page.”M3GAN?” her co-host, Ross Mathews, asked in confusion at the beginning of the video just as M3GAN’s owner in the film, Cady (played by Violet McGraw), did. Drew then hilariously mimicked the dance — which occurred near the end of the film when the killer doll was hunting for a victim. “M3GAN has taken over The Drew Barrymore Show!” the clip’s caption read.

The dance has been an absolute hit on TikTok, even rivaling Jenna Ortega‘s dance from Netflix’s hit series Wednesday in popularity. 11-year-old Violet even took the dance to Access Hollywood earlier this month to teach co-host Mario Lopez the fluid moves. Both the dance and film have been such a smash hit that a M3GAN sequel has already been ordered for a 2025 release, according to The Hollywood Reporter.

Drew Barrymore’s Spouses: Everything To Know About Her 3 Ex-Husbands

Denial of responsibility! Theinspi is an automatic aggregator around the global media. All the content are available free on Internet. We have just arranged it in one platform for educational purpose only. In each content, the hyperlink to the primary source is specified. All trademarks belong to their rightful owners, all materials to their authors. If you are the owner of the content and do not want us to publish your materials on our website, please contact us by email: [email protected] The content will be deleted within 24 hours.
Share. Facebook Twitter Pinterest LinkedIn Reddit Email
Previous ArticleHundreds of child asylum seekers have gone missing in UK, government admits | CNN
Next Article Wife and husband ‘planned fatal shooting’ in hospital for weeks