‘Enormous’ iceberg over 2x the size of Toronto breaks off from Antarctica – National | Globalnews.ca 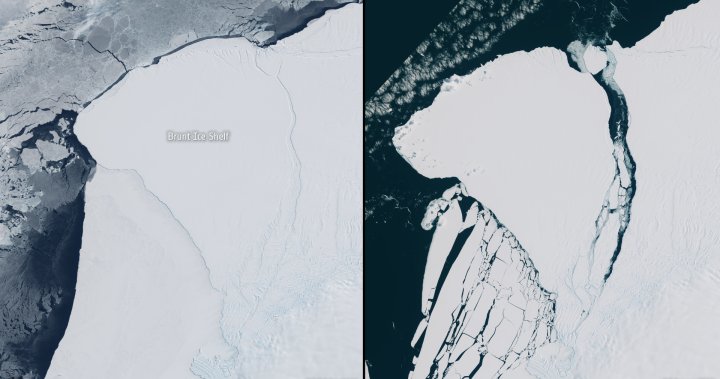 British and European scientists have confirmed that a massive iceberg, estimated to be 1,550 square kilometres in area and 150 metres in thickness, has broken off from Antarctica’s Brunt Ice Shelf after “several years of desperately clinging on.”

In comparison, the city of Toronto covers 630 square km.

The British Antarctic Survey (BAS) first detected the major calving event occurring on Jan. 22 between 19:00 and 20:00 UTC during a particularly high tide known as a spring tide. In a press release, the BAS noted the newly formed iceberg is “almost the size of Greater London, [U.K.].”

The European Space Agency (ESA) explained that the “enormous” iceberg was formed when “the crack known as Chasm-1 fully extended northwards severing the west part of the ice shelf.” They confirmed with satellite imagery that the new berg had finally split off.

After being “dormant for some decades,” Chasm-1 began to grow again in early 2012. Since then, scientists have been monitoring the crack, waiting for the day when it would finally sever a new iceberg off the shelf. The calving event is not a result of climate change, experts said.

BAS glaciologist Dominic Hodgson said, “This calving event has been expected and is part of the natural behaviour of the Brunt Ice Shelf. It is not linked to climate change. Our science and operational teams continue to monitor the ice shelf in real-time to ensure it is safe.”

Rare meteorite found in Antarctica wows scientists with its size

The new iceberg will likely be named A-81, in accordance with iceberg naming conventions, though an official name has yet to be chosen. A smaller iceberg that broke off to the north will likely be called either A-81A or A-82.

Ted Scambos, a senior research scientist at the University of Colorado, told the Washington Post that the berg “is a huge mass of ice, about 500 billion tons,” but it isn’t the largest iceberg ever recorded. That one “rivalled Long Island,” he said.

According to the ESA, the largest iceberg in the world, called A-76, is around 4,320 square km.

This week’s calving event marks the second massive iceberg to be created off the Brunt Ice Shelf in recent years. In February 2021, a berg around 1,270 square km broke off and drifted into the Weddell Sea.

The Brunt Ice Shelf is home to a BAS research station called Halley VI, which was preemptively moved inland 23 km in 2016 as Chasm-1 continued to widen. The research station, currently manned with 21 staff, was unaffected by the calving event.

“The station is currently around 20 km from the line of rupture,” the ESA reported.

Scambos notes that further destabilization in the Brunt Ice Shelf could force “another expensive move of the station.”

Sea ice levels in Antarctica are constantly in flux, in contrast to the shrinking Arctic, which is being hardest hit by human-caused climate change. Over the past couple of decades, Antarctica’s sea ice has swung from record highs to record lows.

“There’s a link between what’s going on in Antarctica and the general warming trend around the rest of the world, but it’s different from what we see in mountain glaciers and what we see in the Arctic,” Scambos says.

Satellite data shows that between 1978 and 2014, the region was still producing record-high sea ice until it suddenly plunged in 2016. Antarctic sea ice levels have been lower than average ever since.

Denial of responsibility! Theinspi is an automatic aggregator around the global media. All the content are available free on Internet. We have just arranged it in one platform for educational purpose only. In each content, the hyperlink to the primary source is specified. All trademarks belong to their rightful owners, all materials to their authors. If you are the owner of the content and do not want us to publish your materials on our website, please contact us by email: [email protected] The content will be deleted within 24 hours.
Antarctic sea ice Antarctica Antarctica iceberg big iceberg Brunt ICe Shelf Environment glacier Ice shelf iceberg iceberg Antarctica iceberg calving new iceberg Trending World
Share. Facebook Twitter Pinterest LinkedIn Reddit Email
Previous ArticleKrista Vernoff Checks Out as Showrunner of ‘Grey’s Anatomy,’ ‘Station 19’
Next Article Xbox Game Pass Is Losing Four More Games Very Soon, Microsoft Confirms