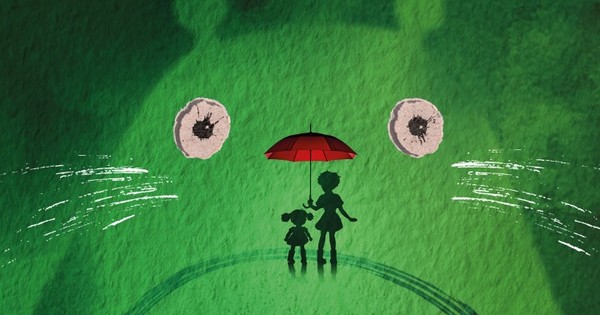 The Royal Shakespeare Company’s production of My Neighbour Totoro is completely sold out. Still, on November 10 at the Japan Society in New York City, a small crowd got to enjoy a talk with the show’s puppet designer Basil Twist and some exclusive behind-the-scenes looks at the production. The RSC has been understandably secretive about the puppets in this stage adaptation of the beloved Studio Ghibli film, wanting audiences to experience them in the theatre. The glimpses we got at this event were limited but enticing.

Twist was introduced with a series of video clips from some of his past experimental puppet theatre productions: Symphonie Fantastique, The Rite of Spring, and Dogugaeshi. The latter show, which involved elaborate usage of sliding screens and was performed at the Japan Society in 2004, was seen by a staffer at Nippon TV, one of the companies in Studio Ghibli‘s production committee, and ultimately earned him the job designing puppets for Totoro. After this introduction, the event consisted of a discussion between Twist and GKIDS‘ director of distribution Chance Huskey, accompanied by photos, videos, and a brief audience Q&A.

The one video clip of the play itself we got to see was from the scene when Mei discovers the soot sprites in the attic of her new house. The soot sprite puppets are made of ostrich feathers and held on sticks by visible puppeteers. Twist said he got the inspiration for their design from a fridge magnet he saw at the Jim Henson Company (one of the studios that worked on the play). He wanted to ensure the design differed from the soot sprite puppets used in the Japanese stage production of Spirited Away. The Spirited Away soot sprites are more “anthropomorphized” with legs and eyes, while the Totoro soot sprites are “wilder” and have no visible eyes except for in one scene when they all combine to form a giant soot sprite.

We saw many work-in-progress photos of designing the big Totoro himself. Twist always experiments with ideas using the simplest materials before getting more detailed later in the process. The first such “experiment” for Totoro got a ton of laughs from the audience: an inflatable store-bought snowman with Totoro’s face scribbled on it. Twist knew that an inflatable puppet was the way to go for a character that’s giant but also able to fly. The second test-Totoro was one Twist had to make at his parents’ house during the height of the COVID-19 pandemic in 2020. This one was still rough but closer to the proper shape and features for Totoro. Composer Joe Hisaishi (who was delegated the go-to representative of Studio Ghibli on this project) gave this Totoro his approval. He was the launching point for the puppets that would eventually be designed.

Photos of the Jim Henson Company team designing parts of Totoro show how massive this forest spirit is. Its mechanical eyeball is bigger than its designer’s head; a photo taken from inside its mouth looks like it’s about to eat the craftsperson up. Five different Totoro puppets are used, with the biggest being the lying-down model for when Mei gets on its belly. The texture of Totoro’s fur is designed with nets and yarn. Supposedly the fur is relatively sparse when one looks close up but appears full to the audience.

One photo was shown of someone crafting a model for one of seven Sho-Totoro puppets used in the play (Sho-Totoro is sometimes called “Chibi-Totoro,” a name Twist loves, but Ghibli reportedly considers “disrespectful”). Twist said he usually dislikes using small puppets, but it sounds like his team managed to make Sho-Totoro one of the more “magical” effects in the show. While they couldn’t make a puppet that can turn invisible like Sho-Totoro, the puppet does disappear and reappear in different places.

No photos were provided of any parts of the mid-sized Chu-Totoro, nor was anything shown of the Catbus. The latter’s arrival at the train station is reportedly “the most wonderful moment” in the production; the event played the scene from the movie to emphasize the challenge of transferring the vehicular cat to the stage. All of the actors in the play except the ones playing Mei and Satsuki double as puppeteers, and the Catbus arrival scene requires everyone’s involvement, with six or seven people needed to operate Totoro and 10 required to handle the Catbus.

Naturally, the first question asked by an audience member was whether the play would transfer to the States soon. According to Twist, demand for the play is high, but the biggest challenge with any transfer is that its massive scale was built around the vast size of the Barbican Centre and that they don’t want to “shrink” the show too much for the sake of a smaller house. A transfer to London’s West End is the most probable next step for the show, with any American run coming after that.

Another audience member asked about translating 2D animation into the 3D medium of live theatre. Twist talked about how when such adaptations are done poorly, it feels like “2.5D” or “cosplay” and that the goal is always to add dimension and make everything feel present. When asked whether Twist had ever heard from Hayao Miyazaki about the project personally, he answered that he did not, with Huskey adding that Studio Ghibli has grown more open to collaborations in recent years and has been delegating different partnerships to different people to handle.

The evening ended with a raffle giveaway of various Totoro toys. Even with the limited material allowed to be shown, it was an informative evening, and the closest anyone outside of London will likely get to see the play for a long time.

Denial of responsibility! Theinspi is an automatic aggregator around the global media. All the content are available free on Internet. We have just arranged it in one platform for educational purpose only. In each content, the hyperlink to the primary source is specified. All trademarks belong to their rightful owners, all materials to their authors. If you are the owner of the content and do not want us to publish your materials on our website, please contact us by email: [email protected] The content will be deleted within 24 hours.
Share. Facebook Twitter Pinterest LinkedIn Reddit Email
Previous ArticleiPadOS 16.3 is here: new features, supported iPads, everything we know
Next Article Your Anime Rankings – Best of Fall 2022, Nov 12-18