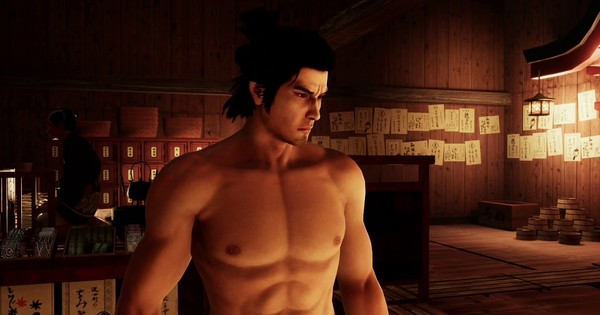 This last weekend, I was able to drop by Sega HQ in Tokyo to spend an hour with the latest build of Like a Dragon: Ishin!, the upcoming remake of 2014’s Japan-only Ryu ga Gotoku Ishin! It turned out to be a rather silly experience (and I mean that in the best way).

For my time with the game, I was locked into a free roam mode—i.e., I could do the various sidequests and get into random fights but could not progress the main story. Moreover, I was allowed to play either at night or during the day—so I did both.

The central shopping district of Kyo, where the game is set, is lively. With main streets full of shops to back alleys containing everything from bathhouses to schools—and everything in between. Be it day or night; there’s a ton to explore—though it can be a bit jarring when so many people want to attack you for no reason.

The battle system is relatively standard for a 3D beat ’em up: You can dish out various light and strong attacks mixed with grabs and throws. The game also allows you to switch between four different weapons on the fly: fists, a sword, a gun, and dual wielding a sword in one hand and a gun in another. Each weapon has different playstyles and move sets—not to mention brutal, cinematic special attacks to spice things up.

The combat was fun (though I had to force myself not to stand back and shoot everyone from a safe distance). However, I will admit there were a few frustrating times where I would get hit once, fall over, and then wait a few seconds to stand back up—only for it to happen again right after. (That said, I’m sure I’d learn how to consistently dodge those attacks with time.)

While there is a lot of combat in the game, I had the most fun outside of meleeing in the streets. Wandering through a random back alley, I found a man lamenting he had no idea how to read a globe. Soon I was teaching a class of kids the locations of various countries—on a map that is only vaguely reminiscent of the actual shape of our planet. The next moment I was feeding a collapsed sumo wrestler. The one after that, I was protecting a journalist from thugs—who then asked if he could try writing a strange new kind of article with my cooperation called an “interview.” At night, I decided to hit up the public bath to relax… which soon devolved into me running butt naked through the streets to catch the thief who stole my clothes—only for the police to try and arrest me for indecent exposure instead.

These are just some of the crazy experiences I had in under an hour of playing. It really felt like there was some adventure around every corner, and I had no idea what would happen next. I can easily imagine sinking hour upon hour into these side quests—finding new ones and continuing old ones with hilarious results.

That said, there was one major letdown regarding the side quests: none were voice-acted—well, not beyond a few grunts for each character to denote their emotional state. Perhaps it’s unrealistic to wish for a game so full of side content to be fully voice-acted, but it would still have been nice.

Overall, being thrown into Like a Dragon: Ishin!‘s world for an hour was one heck of a trip. From the combat to the story, everything was ridiculously over-the-top in the best way. Despite the samurai trappings, it’s pretty much standard fair for a Like a Dragon game. If you like other games in the series, it’s a safe bet you’ll like this one too.

Like a Dragon: Ishin! is scheduled to be released on February 21, 2023, for the PlayStation 4, PlayStation 5, Xbox One, Xbox Series X/S, and Windows.

Denial of responsibility! Theinspi is an automatic aggregator around the global media. All the content are available free on Internet. We have just arranged it in one platform for educational purpose only. In each content, the hyperlink to the primary source is specified. All trademarks belong to their rightful owners, all materials to their authors. If you are the owner of the content and do not want us to publish your materials on our website, please contact us by email: [email protected] The content will be deleted within 24 hours.
Share. Facebook Twitter Pinterest LinkedIn Reddit Email
Previous ArticlePREVIEW: One Piece Odyssey
Next Article The Best and Worst Anime of Fall 2022