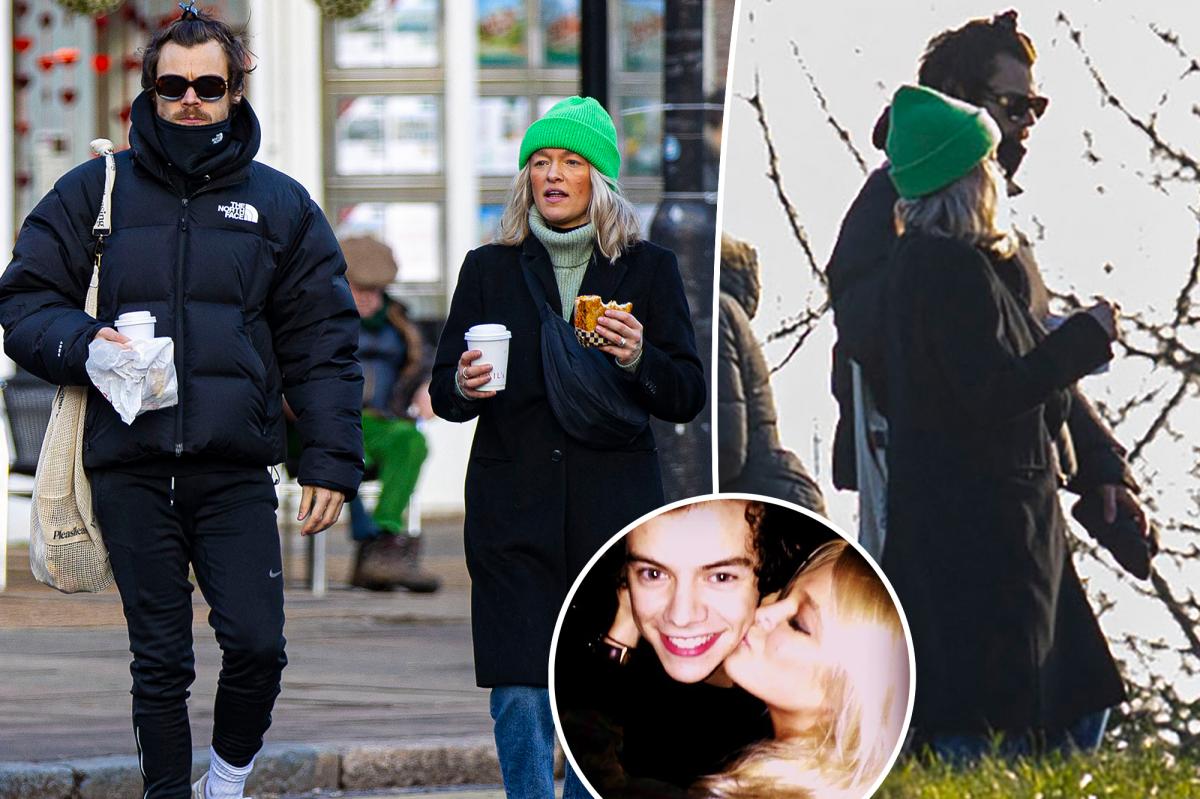 Harry Styles and Ellis Calcutt have a whole lot of history.

The “Late Night Talking” crooner, 28, was pictured grabbing coffee and catching up with his rumored former flame in London on Wednesday, two months after his split from Olivia Wilde.

The former One Direction singer donned a black North Face jacket with black Nike leggings and a pair of sneakers for the outing.

He completed the look with a claw clip in his hair, a tote bag from his beauty line, Pleasing, and a pair of black shades.

Calcutt cut a chic figure as she carried a coffee and a sandwich while taking a stroll with the “As It Was” chart-topper.

She opted for a green turtleneck with a matching green beanie, dark wash jeans and a black peacoat.

The blonde beauty accessorized with a pair of white sneakers and a cross-body bag.

Styles and Calcutt reportedly dated in the early 2010s after his brief fling with Taylor Swift.

The pair were first photographed in Glasgow, England on a movie date in 2012, however, Calcutt maintained they were just friends.

“Wow, you people are sooo quick to make up rumours,” she wrote on social media at the time, per the Daily Mail.

“Me & Harry went for coffee together as we haven’t seen each other since last year,” she added.

“We’re only good friends and have been since high school. I have a lovely boyfriend called Phil so you can stop spreading rumours about me and Harry dating each other because we absolutely are not!”

It seems the pair are still just friends as Calcutt, who is followed by Styles on Instagram, alluded to being engaged in a March 2022 post.

The outing comes two months after Page Six confirmed in November that Wilde, 38, and Styles had called it quits on their nearly two-year relationship.

“There is no bad blood between them. Harry didn’t dump Olivia, or vice versa,” a source told us at the time.

“This is the longest relationship Harry’s ever had, so clearly they have a special bond.”

The insider said distance played a role in the “Don’t Worry Darling” co-stars’ decision to separate before the holidays.

“It’s impossible to have a relationship when he’s in every continent next year [on tour] and Olivia has her job and her kids,” the source explained.

“This is the right thing for both of them.”

While Styles has been spending time in his native England, Wilde has continued to stay active on social media and in the public eye, walking several red carpets and spending time with her kids: Otis, 8, and Daisy, 6, whom she shares with ex Jason Sudeikis.

Denial of responsibility! Theinspi is an automatic aggregator around the global media. All the content are available free on Internet. We have just arranged it in one platform for educational purpose only. In each content, the hyperlink to the primary source is specified. All trademarks belong to their rightful owners, all materials to their authors. If you are the owner of the content and do not want us to publish your materials on our website, please contact us by email: [email protected] The content will be deleted within 24 hours.
celebrity breakups celebrity couples Celebrity News celebrity photos Entertainment harry styles music olivia wilde
Share. Facebook Twitter Pinterest LinkedIn Reddit Email
Previous Article‘To Leslie’ Going Back Into Select Theaters Following Andrea Riseborough’s Oscar Nom
Next Article Elizabeth Warren: Crypto giants are ‘collapsing under the weight of their own fraud’ | CNN Business