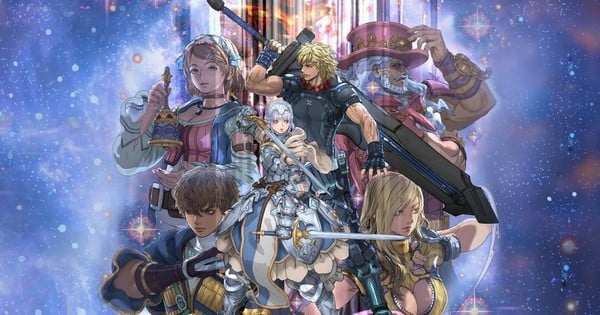 Best known for his design work in CAPCOM‘s Street Fighter games, Akiman is a renowned character designer who was called upon to help create the world and cast of Star Ocean 6: The Divine Force. We were lucky enough to sit down with the famed artist to ask him a few questions about his time working on the game.

ANN: Okay, so first things first: what drew you to accepting the project of designing the world and characters of Star Ocean 6: The Divine Force?

Akiman: I was curious what was going to happen if I worked with Square Enix and [its] fusion between science fiction and fantasy [sic]. It’s not very common, but wanted to see what that was going to be like. Before working on these kinds of games, I was known for working on a lot of fighting games, but back then there wasn’t much text or writing involved. Nowadays I’m much more open to working on these kinds of games, particularly RPGs.

In relation to that, what challenges arise from designing characters in a science fiction setting as opposed to something set in a modern or contemporary setting like Street Fighter?

Even for Star Ocean or games that have science fiction elements, I try to use familiar designs and structures in terms of character designs. I believe that people are only interested in what they know, what they’re familiar with. So, for example, the protagonist of this Star Ocean game wears a polo shirt. What I wanted to do from there is to add a modern technology element twist to that. What these characters wear is an extension of what we wear, [what] people wear in the modern age. In that sense, I don’t think there’s much difference between designing these kind of characters and modern characters, like a Street Fighter.

The core of the whole thing is to try to find basically what people would find relatable, something like a domestic kind of vibe for these characters. Would that be it?

Thank you. So, first off, to go over the entire process: everyone has a meeting and I would usually get messages from clients saying where they want to go with the project in terms of the character design. They would usually talk over a lot of undecided elements. So, for example, is this character going to wear, like, rabbit ears or not? Those kinds of things. From there, I would get documents of what’s already decided in terms of the character design. I would create rough designs from there, submit those for approval, and if those are approved, I would clean them up, make adjustments from there, and repeat that process. If not, start over on the design, I guess, to kind of answer your question. There is a general frame where I would go off of, where you would start off of, and you would receive a lot of comments, inputs to see where you can make adjustments. In that sense, having full reign is not really even possible for my position, but for this project in particular, I did feel that there were some freedom in that sense.

Whose design were you most satisfied with throughout the process of the design work and with the overall finished work?

To answer your question, my answer will be Mao Shia. She’s like a female character that’s Chinese. To add to that, the most challenging character to design was actually the protagonist, Raymond. In that sense, it was also satisfying to be able to finish his design as well.

Which element proved to be the most challenging to finalize in terms of design? Either because [you weren’t] satisfied with the result or because it was one that simply wasn’t quite what it was that the people at Square Enix were looking for.

First and foremost, there’s no character that I was not satisfied with. I wouldn’t finish it if I wasn’t satisfied. Again, Raymond was a struggle in the sense that it took quite a lot of time to finalize and to reach that point, considering a lot of elements of his character—he’s wild, he’s the young guy, things like that. Again, it took some time to find his character design to be acceptable in a way, so it was quite a process.

How attached do you get to your character designs over the course of production?

I am attached to all these characters; in terms of how much, it’s hard to express this verbally, but it’s not like I’m going to cry when I submit these illustrations. It becomes a problem when I become too attached. It’s like when a parent bothers their child for every small thing; it gets kind of bothersome and I don’t want to be like that. I send my work to the world with that in mind.

Somewhat along those lines, were there any concepts or ideas you had for designs that you were hoping would be accepted before submission but ultimately weren’t?

So, in terms of unused designs, there were some cases where rough designs weren’t really accepted, but these things happen. I try not to think about it that much. For example, Raymond’s first design—it kind of gave off a rather weak impression. Raymond turned out to be a more tough, strong, wild kind of guy. I reflected that into the final designs. For another example, Midas: I was told that he was going to be like a cool old guy, but I’m not really sure how one would draw a cool old guy. What I did was look up “cool old guys” on the Internet. But when you do that, the product becomes kind of boring. To resolve that, the character has a weird hat in the end product, and that’s how it came out to be. In general, I try not to be bothered by unused designs, but that could also be because of my age.

As a side note, did you look to the older Star Ocean games for any kind of inspiration? Or was this something that you simply tried to do off the cuff with the concepts that Square has presented you with?

I did watch a lot of footage of past titles to see what kind of world it was based on and to bring that kind of aesthetic into Star Ocean 6‘s character designs. Also, I looked at the character designs to see and understand what the character designers did for those past titles. For example, some characters from past titles will fight wearing t-shirts, or there’s a character that has a dragon growing on each side of them [note: Ashton, from Star Ocean: The Second Story], things like that. In terms of the faces of these characters, they were all pretty good-looking—there were a lot of female player fans. Those are the things that you try to keep in mind.

What are some other signature flourishes you like to include whenever you create characters, be it in Star Ocean or any other game?

My finishing touches, as mentioned earlier, are combining two familiar elements into something new—I consider that as a finishing touch. I want to see what would happen when you combine two things together, something that past designers didn’t or wouldn’t do. An example is J.J., a character from Star Ocean 6. He’s a samurai robot with some ninja elements incorporated into his design, and he has a circular face. It’s kind of like a crystal. Normally a samurai character would have a traditional Japanese samurai mask, but that would be kind of boring.

Now that you’re on the other side of your work on Star Ocean 6, how do you feel about the project?

To wrap up, do you have any message for the American fans?

Looking back at the Star Ocean series, Star Ocean 5 kind of revitalized it, and Star Ocean: Anamnesis helped the game go by. Now we have Star Ocean 6. All the staff involved are very powerful, and very passionate about this project and the series. I hope that the fans in the US enjoy the game.

Denial of responsibility! Theinspi is an automatic aggregator around the global media. All the content are available free on Internet. We have just arranged it in one platform for educational purpose only. In each content, the hyperlink to the primary source is specified. All trademarks belong to their rightful owners, all materials to their authors. If you are the owner of the content and do not want us to publish your materials on our website, please contact us by email: [email protected] The content will be deleted within 24 hours.
Share. Facebook Twitter Pinterest LinkedIn Reddit Email
Previous ArticleHero of a Lost Era: Examining the Context of Kamen Rider Kuuga
Next Article INTERVIEW: Studio Trigger’s Hiromi Wakabayashi and Shigeto Koyama