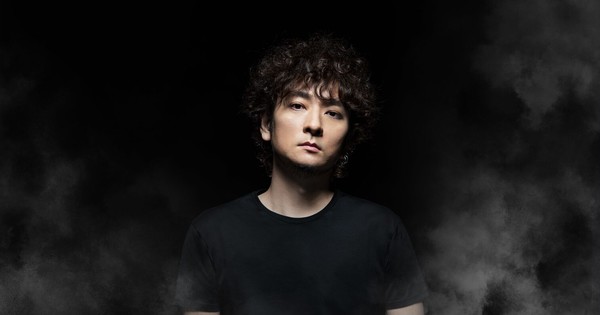 I first came across the artist STEREO DIVE FOUNDATION through their performance of “Daisy,” the ending song for the Kyoto Animation anime Beyond the Boundary. I had no idea at the time that this would become one of the first songs written by a seasoned solo artist performing under a new name.

Sometimes referred to as R・O・N, he initially started as a member of OLDCODEX, a Japanese rock band that performed themes for Kuroko’s Basketball, Free! – Iwatobi Swim Club, and more. R・O・N later branched off to create the sound-making project STEREO DIVE FOUNDATION independently and has produced beloved songs across different franchises like Gangsta. and That Time I Got Reincarnated as a Slime. At Anime NYC 2022, Anime News Network had the pleasure of speaking with the artist, asking about his history with music, and what it was like writing a new insert song for the upcoming animated film That Time I Got Reincarnated as a Slime: Scarlet Bond.

ANN: Can you tell me a little about how you started this career path?

So I started playing the piano when I was four, and by high school, I was already writing full songs. College is when I kicked off my career as a musician.

ANN: Did you have any prior audio engineering experience or training?

Yes, but it’s really just a process of continuing education and training. As I’ve gotten older and continued my career, I’ve done my best to learn, adapt and keep up to date to learn for myself.

ANN: Did you have any particular inspirations from your musical upbringing, and how does that translate into your music today?

When I was in elementary school, I spent some time in Germany, and being in Europe really gave me the exposure that people in Japan don’t normally have. It’s a very different upbringing with a lot of multicultural sensitivities. So I feel like I was able to grow that ability to capture nuances from things like the street scenery, the ambiance, and the environment. I absorb more of the fine nuances of being in an environment that I think really reflects in my music.

ANN: Interesting! Let’s get into some of those nuances, then. I remember first coming across your work a few years ago with the Beyond the Boundary (Kyōkai no Kanata) ending theme and falling in love with its almost somber yet comforting tone. Could you share what that production process was like?

I knew what core element I wanted to convey in that song but there were multiple interactions with the client in terms of what the different melodies would be. We tested a bunch of different formats and eventually landed on what we have now.

ANN: Is that a similar process for the other songs you write for other anime?

So that was the first song that I wrote as STEREO DIVE FOUNDATION, so in that specific instance, it’s probably more similar to the music I contributed to other artists. But that process is also pretty common for how I write and develop my music.

ANN: Can you maybe compare that process with some of your later work, like the opening songs you wrote for the anime GANGSTA and Dimension W?

So the main difference between songs that I write for myself and songs that I contribute to other artists is that I will actually deliver the final performance for the former. But even for the songs that I am contributing, I do the vocals on them to make sure there are template vocals. So up to the process of the template vocals, the process is very similar between those two camps of work. But what’s very interesting about the STEREO DIVE FOUNDATION music is that I know I will be able to put that final element into the process of creating the music because it’s actually not being handed off to anyone afterward. So since “Daisy” for example, I’ve been putting a lot more of myself and my soul as I prepare for the final delivery of the song.

ANN: That’s beautiful, and I recall you mentioning something similar briefly on stage during the Slime panel. Would you mind sharing a little bit regarding the new song that you’ve written for the Scarlet Bond movie?

A miracle actually happened during this insert song creative process! I was given about a five to six-minute duration to produce the song. At first, I thought, “Well five to six minutes is pretty long for an insert song” but then I figured I would just do my own thing and produce what I think is the best ballad. Then I can just edit it on the backend later to make it the length that it needs to be. But then when I submitted my version they said “Perfect! We’re done!” and I was truly surprised by that cause it was different from the five to six minutes that they originally wanted. But it turned out that once we synched the song to the visuals, we saw that it synchronized perfectly. The emotional enrichment from both the music, the lyrics, and the visuals worked together beautifully. So that’s what I mean when I say that it was truly a miraculous event!

ANN: Haha, I take it that doesn’t happen too often?

ANN: Well, now I’m curious to see it in action!

Oh, I would like for the delivery to be together to get the full effect. You can listen to the song afterward to enjoy it on its own later but it would be great if people’s first experience was witnessing that magic together.

ANN: Fair enough! Thank you so much for your time.

Denial of responsibility! Theinspi is an automatic aggregator around the global media. All the content are available free on Internet. We have just arranged it in one platform for educational purpose only. In each content, the hyperlink to the primary source is specified. All trademarks belong to their rightful owners, all materials to their authors. If you are the owner of the content and do not want us to publish your materials on our website, please contact us by email: [email protected] The content will be deleted within 24 hours.
Share. Facebook Twitter Pinterest LinkedIn Reddit Email
Previous ArticleNelly Cheboi, who creates computer labs for Kenyan schoolchildren, is CNN’s Hero of the Year | CNN
Next Article Your Anime Rankings – Best of Fall 2022, Dec 3-9