Interview: The Staff of the 2022 BASTARD!! Anime 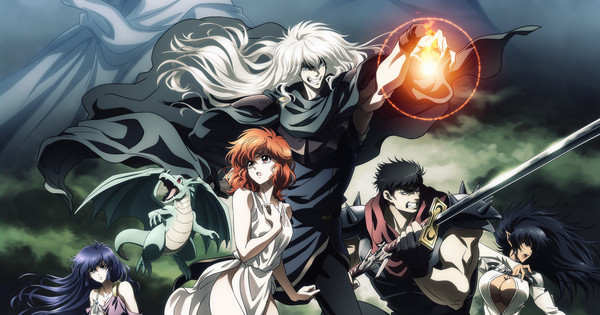 The new BASTARD!! -Heavy Metal, Dark Fantasy- anime debuted on Netflix earlier this year with a second season in the works. The remake breathes new life into Kazushi Hagiwara‘s iconic dark fantasy manga, which started in 1988 and has released twenty seven volumes as of March 2012. We spoke to director Takaharu Ozaki, screenwriter Yousuke Kuroda, and character designer Sayaka Ono to find out what they didn’t change about this decades-old classic.

When was the decision made to make a new BASTARD!! anime, and what interested you in the project?

Takaharu Ozaki: I first heard about it right at the start of 2019. I’ve been super engrossed in horror, science-fiction, fantasy, action, sex, and violence since I was a child, so I thought that working as a director on BASTARD!! would be a peerless opportunity.

Instead of considering the significance of the project deeply, mentally I was perhaps more like an excited child, simply jumping into a project I like.

What do you think makes Dark Schneider an interesting protagonist for modern anime viewers?

OZAKI: I think he is selfish, egotistical, and flaunts his desires and dominance, but he’s kind, cool, and charismatic at heart. Also, he’s endearing. It’s adorable how Yoko’s scolding wears him down.

YOUSUKE KURODA: I have to say it’s how he’s true to his desires and always pushes forward, for better or worse. Even as he’s brutal and cunning, he has Lucien Renlen’s personality mixed inside him. It’s great how you can see his human side peering through the cracks. In this modern era which emphasizes compliance, a character like Dark Schneider, who exemplifies wickedness and eroticism, actually feels graceful instead.

When creating this new series, did you or the staff refer to the 1992 OVA at all?

OZAKI: I watched it at the time. When making this current anime adaptation, I might not have referenced it much. At most, someone would occasionally ask, “What was it like in the OVA version?” at the meetings.

Some of the animation staff also worked on the OVA. Also, I have a connection with Mami Koyama, who played Arshes Nei in episodes 1-3 of the OVA and the drama CD, so we got her to play the Demon God Anthrasax in the new anime.

What do you think separates Bastard!! as a fantasy series from current fantasy (or isekai) anime?

OZAKI: I think of BASTARD!! as both a shounen manga and a fantasy for adults at the same time. It does justice to lofty themes such as courage and friendship while liberally depicting the inevitability of sex and violence. One could perhaps say that Dark Schneider represents the soul of the series. I think he possesses a strength that doesn’t really exist in today’s isekai fantasy.

KURODA: I think it is one of the genre’s forebearers. I am sure that any staff currently working on (dark) fantasy works in Japan received their initiation through BASTARD!!. That’s how much of an impact that manga made. I am no different in that regard.

Was there any concern that audiences wouldn’t appreciate the mix of sex and violence?

OZAKI: None at all. Putting aside interpretations of good or bad, I am sure that the long-standing impulse for sex and violence within living creatures will continue to exist in some form. For all the progress in culture, science, and thinking, I believe that our animal instincts will never completely go away. So I think that this story from an older era can live on.

Part of the fantasy is the sexiness of all the characters. Did you enjoy letting loose with this series?

OZAKI: It wasn’t 100%, but I think we were able to be aggressive about expressing it. We couldn’t simply show them naked and be done with it, so it was a herculean task to give a sense of unity since each individual animator has different skills, which causes variation in the artwork and mannerisms. I hope we were able to depict them with beauty and sensuality.

Which battle in the series did you most enjoy working on?

OZAKI: That would be the battle scene with the Golem and Abigail. We only have so many artists on staff who are skilled and can draw in large quantities, so we couldn’t spare the resources to do it hand-drawn, but the CG staff put in quite a lot of effort to create a high-quality battle scene.

Do you have a favorite heavy metal band (or did you listen to any heavy metal while working on the series?)

OZAKI: I love Iron Maiden. I became a fan when I saw the horror film Phenomena directed by Dario Argento in cinemas at the time, and it used “Flash of the Blade” as an insert song. So not only do I have these emotional attachments, I’m always on the lookout for opportunities to use heavy metal in my work.

SAYAKA ONO: I don’t have a specific favorite, but I am a fan of rock music. It makes me more efficient at work. I have a playlist with Marilyn Manson and Guns N’ Roses.

How did you update the story for the modern day?

KURODA: Instead of updating it for the modern day, I wrote the script out of the utmost desire to respect and rebuild the world Kazushi Hagiwara created. It never once occurred to me to change anything. If I dare to say what I changed, I suppose I omitted ”a whole store of knowledge” of the original manga’s monsters and setting.

Part of the series’ appeal is the relationships between Dark Schneider and the many women he encounters. Which character interactions did you most enjoy writing about?

KURODA: Among all the characters in the anime, Princess Sheila is my favorite. I don’t suppose I even need to state the reason? As for the character interactions, I enjoyed writing the lines for the ministers of the kingdom of Meta-llicana as they suss out the situation in detail while inserting their personal feelings.

Did original creator Kazushi Hagiwara participate in any of the scriptwriting processes?

KURODA: He did not participate directly, but he would immediately respond whenever the anime staff felt uncertain about something. He was also a big help in providing the materials he used at the time, which even included hidden aspects of the story. I want to extend my greatest thanks to him.

The Bastard!! manga has a very 1990s feel to it. How did you update the character designs while still maintaining the original’s signature look?

SAYAKA ONO: In the beginning, I was asked to draw them with a modern art style, but I said I don’t even know what a modern style is supposed to be (laughs). I thought that Mr. Hagiwara’s art is appealing regardless of the era, so I ultimately concentrated my efforts into transferring Hagiwara’s style into anime. Thus, rather than matching the modern era, my job was to reflect Hagiwara’s art faithfully while pruning some linework and parts to make sure that they would be serviceable for animation.

Part of the fantasy is the sexiness of all the characters. How did you incorporate this into the character designs, especially Dark Schneider?

ONO: Every character has their charm, and I had a lot of fun drawing them. In particular, DS is a uniquely charming protagonist with his devilish personality and peerless good looks. However, as the manga progresses, the art style gradually changes, so there’s a DS for every head-to-body ratio, and he’s always balanced. While every version of him is appealing, I took pain to find the most iconic representation. As a result, if I made a firm decision about which part of the manga to draw DS from, the other characters from before or after that point in the story would look out of place. So in order to bring out the DS of popular memories, I changed the direction so that our DS is an accumulation of his various parts.

Do you have a personal favorite of the characters you designed for the series?

ONO: It has to be DS. I haven’t drawn anyone like him before. I aimed for a character that men and women alike can find attractive. I’m also fond of Kall-Su.

When it comes to character design, would you like to see “fluffy hair” make a comeback?

ONO: I have never consciously thought of the 80s (note: the manga started in 1988), but I draw a lot of illustrations with fluffy hair (laughs). I like putting in a lot of hair because it lowers the position of the eyes in a way that looks cute.

Denial of responsibility! Theinspi is an automatic aggregator around the global media. All the content are available free on Internet. We have just arranged it in one platform for educational purpose only. In each content, the hyperlink to the primary source is specified. All trademarks belong to their rightful owners, all materials to their authors. If you are the owner of the content and do not want us to publish your materials on our website, please contact us by email: [email protected] The content will be deleted within 24 hours.
Share. Facebook Twitter Pinterest LinkedIn Reddit Email
Previous ArticleRussia, Iran to Co-Create Stablecoin Crypto Asset ‘Token of Persian Gulf’
Next Article Xiaomi 12 Gets Stable Android 13-Based MIUI 14 Update: Here’s What’s New