Inu-Oh and the Magic of Gender Expression 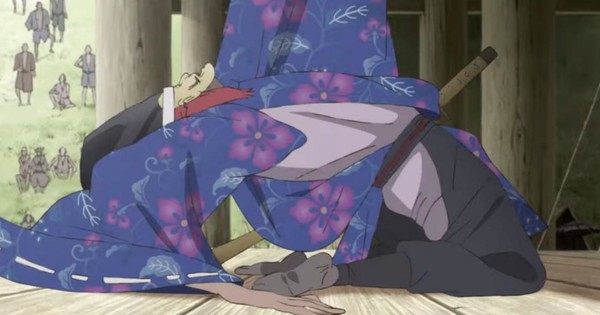 There was a musical movement in the 70s and 80s that took great pride in blurring the lines of gender expression. It was known as glam rock—and throughout the 80s as glam metal—and acts such as David Bowie, Queen, Kiss, and Twisted Sister became well-known for adopting a flashy, androgynous style to pair with their music. This style was seen as an act of rebellion, a way to distance from the revolutionary rock of the 60s by ushering in a sound of decadence and vapidity and a look that was a performance of gender fluidity.

This is also something that we see in the 2021 anime film INU-OH. This is no surprise, as the film’s major focus is how traditions are broken and changed as societies and people progress. The two main characters, Inu-Oh and Tomona, are men on a mission to tell stories of warriors outside the shogunate’s approval. They’re aiming to break the curses of the people that came before them. In doing so, they adopt a style of music and performance similar to that of 70s and 80s glam. We especially see the fashion of it through Tomona, who begins wearing makeup, dressing in traditionally feminine clothing, and growing his hair out.

However, there are multiple ways to read this expression of gender in the film. The first connects to those roots in rock, metal, and theatricality. These are traditionally spaces that openly play with appearances and aesthetics, and practitioners usually use them as part of their performances. Whereas certain types of music and theater are rooted in typical gender presentation to appeal to certain markets, rock and metal usually aren’t. These genres are about rebellion. They are about “sticking it to the man.” In a society with very specific ideas of what a man or a woman should look like, a fundamental act of rebellion is not adhering to those expectations but expressing yourself freely. It’s about turning away from tradition and embracing a different future.

This is what Tomona and Inu-Oh are doing throughout the film. They each start as part of a society that expects something from them. For Tomona, it is the expectation of the biwa players, who are meant to play the stories approved by the shogunate. He is told to dress plainly and keep his head shaved. For Inu-Oh, it is the expectation of staying hidden. He isn’t meant to be a Noh dancer; he isn’t supposed to be seen because of his deformities. He is always seen with a mask on to keep his face hidden. Each of the boys is asked to hide themselves and adhere to the rules set for them by others. Part of their freedom from these expectations comes from the appearances they adopt. As they form their own troupe, they begin dressing in a way that’s more flashy and grand, using makeup, interesting hairstyles, and clothes from many different aesthetics. This point of view focuses less on gender expression as an extension of gender identity and more as an act of expression and rebellion. Tomona and Inu-Oh are presenting this way as a performance, an homage to the culture of glam and the spirit of revolution. 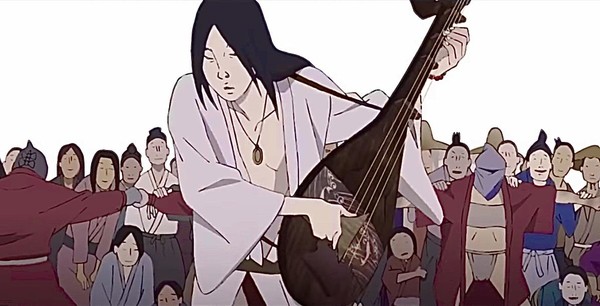 The second way to view gender expression in the film is tied to gender identity itself. This view is supported by the fact that the person who voices Inu-Oh in the film, Avu-chan, identifies as non-binary. Tomona is depicted throughout the film as a deviant; his former teachers denounce his appearance as a “prostitute,” and those in power look upon him with distaste as he breaks the boundaries that have been placed before him. Though people find it off-putting, they still like Tomona’s performances; they just disagree with his gender expression. Ultimately, this culminates in violence as the shogunate enforces the law, and Tomona still refuses to fall in line. He won’t stop telling the tales of warriors lost to time, and he won’t return his appearance to that of a usual biwa player. For some viewers, this is an example of how society treats gender nonconforming, as Tomona is subjected to brutality for daring to be different by people who don’t even want to attempt to understand him. However, it’s also an example of some people’s joy when they are finally allowed to experiment with their appearance. Tomona seems far happier with his more androgynous look. His gender expression is deeply intertwined with his art and being, and that journey of self-discovery is something many people find relatable.

Gender expression is just another unjust law to rebel against in the film. While Inu-Oh doesn’t break this law, keeping in line with a masculine presence, Tomona does, and he is punished for his rejection of societal norms. This end, of course, connects the two interpretations of this film. Regardless of whether you see the film as a story of rebellion or a tale of gender identity, the same message is at the core of the story’s use of gender expression. Everyone has a right to self-discovery and to be heard. All Inu-Oh and Tomona want is to tell the stories of the voiceless, and in their performance, they find themselves.

Denial of responsibility! Theinspi is an automatic aggregator around the global media. All the content are available free on Internet. We have just arranged it in one platform for educational purpose only. In each content, the hyperlink to the primary source is specified. All trademarks belong to their rightful owners, all materials to their authors. If you are the owner of the content and do not want us to publish your materials on our website, please contact us by email: [email protected] The content will be deleted within 24 hours.
Share. Facebook Twitter Pinterest LinkedIn Reddit Email
Previous ArticleOrientalism & Occidentalism in Anime
Next Article Your Anime Rankings – Best of Fall 2022, Dec 10-16