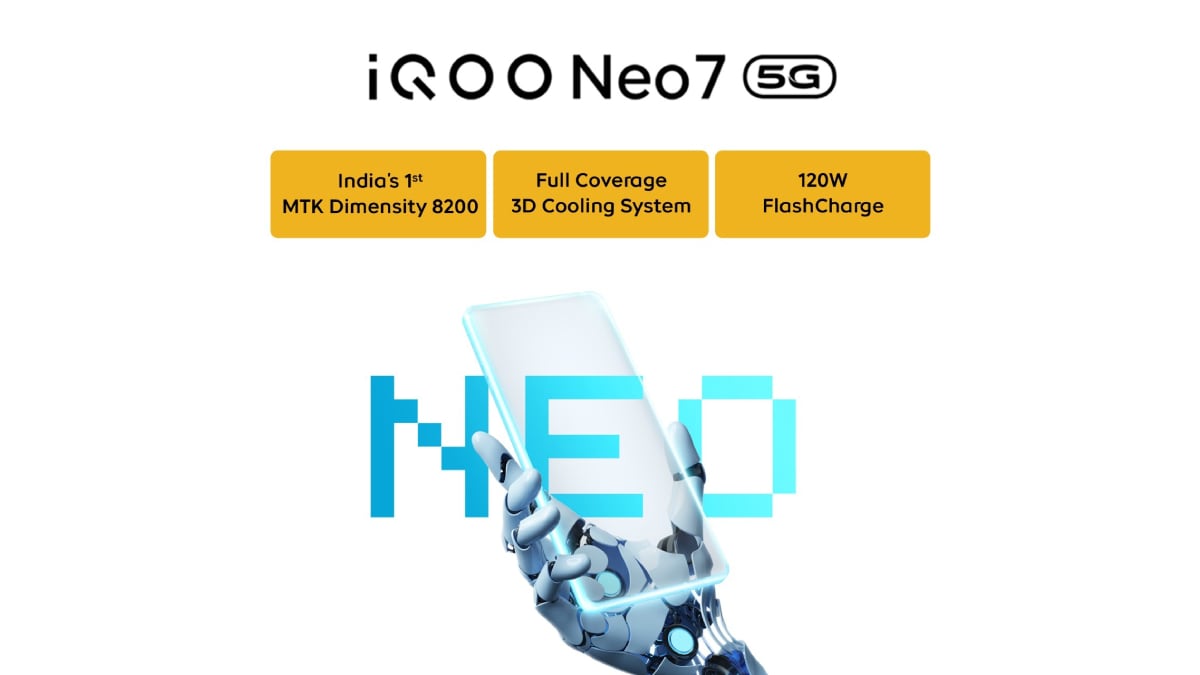 iQoo Neo 7 5G has been confirmed for its India launch months after it was launched in China as part of the iQoo 7 series in October 2022. The smartphone will launch in India on February 16. Before the launch, a few details about the Indian variant has come to light. Reportedly the company said that the iQOO Neo 7 5G will come with a 3D cooling system for heat dissipation and will support 120W flash charging technology. The Indian variant was also reportedly spotted on Geekbench with the model number I2214, which is the same model as was listed on BIS and Bluetooth SIG websites earlier.

Meanwhile, iQoo on Wednesday reached out to Gadgets 360 to confirm that the Indian variant of the iQoo Neo 7 5G will be powered by a MediaTek Dimensity 8200 SoC, along with a 3D cooling system for heat dissipation. The handset will offer 120W FlashCharge support, according to the company.

The upcoming iQoo Neo 7 5G Indian variant was spotted on Geekbench by 91Mobiles with the model number I2214, which is the same model that was previously listed on the BIS and Bluetooth SIG websites. The listing reveals that the phone will be powered by a MediaTek Dimensity 8200 SoC — the smartphone is set to be the first in the country to feature the chipset. The iQoo Neo 7 5G will come with 8GB of RAM and run on Android 13, as per the listing. As mentioned in earlier reports, it is anticipated that this model could be a rebranded version of the iQoo Neo 7 SE.

The company announced via Twitter on Monday that the iQoo Neo 7 would be available in India on February 16. The phone will also be available exclusively through Amazon in India, according to the company. iQoo has not officially confirmed any other details about the phone. The device was previously launched in China in October 2022.

The Chinese variant of the iQoo Neo 7 has a hole-punch cutout and a 6.78-inch full-HD+ Samsung E5 AMOLED 120Hz display. The phone features an octa-core 4nm MediaTek Dimensity 9000+ SoC paired with up to 12GB of LPDDR5 RAM and Mali-G710 GPU. It is powered by the Android 13-based OriginOS Ocean.

The smartphone sports a triple rear camera setup led by a 50-megapixel Sony IMX766V primary sensor with f/1.88 aperture and OIS support, an 8-megapixel ultra-wide lens with f/2.2 aperture and a 2-megapixel macro shooter with f/2.4 aperture on the back and a 16-megapixel front camera. In China, the model is available in Geometric Black, Impression Blue, and Pop Orange colour options.

Denial of responsibility! Theinspi is an automatic aggregator around the global media. All the content are available free on Internet. We have just arranged it in one platform for educational purpose only. In each content, the hyperlink to the primary source is specified. All trademarks belong to their rightful owners, all materials to their authors. If you are the owner of the content and do not want us to publish your materials on our website, please contact us by email: [email protected] The content will be deleted within 24 hours.
iqoo iqoo neo 7 5g specifications 120w flashcharge 3d cooling india launch february 16 geekbench report iqoo neo 7 5g vivo
Share. Facebook Twitter Pinterest LinkedIn Reddit Email
Previous ArticleAsus Zenfone 8, Zenfone 8 Flip Android 13 Update Rolling Out in India
Next Article Apple Led Global Smartphone Shipments in Fourth Quarter of 2022: Report