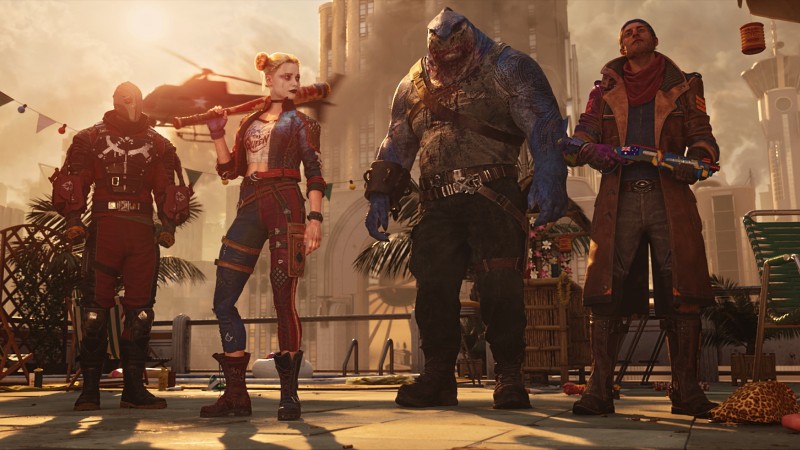 A new image from Suicide Squad: Kill The Justice League has leaked and it seems to confirm that it will be a live service game, or at least feature games-as-a-service elements.

This image, which you can view in the tweet below, comes from the 4chan forum, as reported by Video Games Chronicle, which has also verified with sources that the image is real. The image appears to be Suicide Squad’s start menu and features standard things like game mode selection, chapter select, difficulty, and matchmaking. It also features some menus to page through at the top, including a “Battle Pass” one. Under those top-bar menus are what appear to be various currencies, too.

According to VGC’s sources, a battle pass is, in fact, planned for Suicide Squad but it will be focused on cosmetic things like skins. The publication says it understands the currencies in the image to be “XP used to power up and customize the skill trees of each antihero, effectively making them unique to the player.”

“You don’t start off rebuffed and weak,” VGC’s sources told it. “You just start off great and can get ridiculous, like Arkham Knight’s Batman.”

Arkham Knight developer Rocksteady Studios has revealed very little of Suicide Squad, leaving many to speculate on what exactly this game is and it seems, as many expected, it will seemingly be a live service title. With the game due out sometime this year, here’s hoping Rocksteady starts giving us some more information soon. Is it a full-on live service title or does it just feature elements of games-as-a-service? When can we see a solid chunk of gameplay? When can we play this game? These are questions I hope get answered sooner than later.

In the meantime, catch up on what we do know about Suicide Squad: Kill The Justice League by watching this gameplay trailer from 2021 and then watch this trailer from December that confirms Kevin Conroy will make a posthumous appearance in the game as Batman. Read about how Rocksteady Studios co-founders Sefton Hill and Jamie Walker have departed from the studio after that.

What are your thoughts on Suicide Squad: Kill The Justice League potentially being a live service game? Let us know in the comments below!

Denial of responsibility! Theinspi is an automatic aggregator around the global media. All the content are available free on Internet. We have just arranged it in one platform for educational purpose only. In each content, the hyperlink to the primary source is specified. All trademarks belong to their rightful owners, all materials to their authors. If you are the owner of the content and do not want us to publish your materials on our website, please contact us by email: [email protected] The content will be deleted within 24 hours.
Share. Facebook Twitter Pinterest LinkedIn Reddit Email
Previous ArticleSupreme Court to Hear Rapido’s Appeal Against Bombay HC Order on This Date
Next Article Metaverse Adoption Will Reach Industrial Ecosystems Before Consumers: WEF