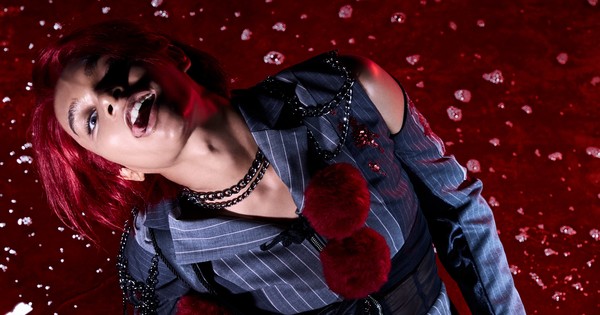 Formed in 2009, Queen Bee is a self-described “Fashion Punk” rock band. They are steadily increasing their presence in the anime sphere, performing theme songs for Dororo, Tokyo Ghoul:re, and Raven of the Inner Palace. The members all use pseudonyms, keeping their personal details such as age and real names hidden.

Avu-chan is the lead vocalist, who is also notable for having some anime voice acting experience. They have played Devil King Zenon in DEVILMAN crybaby and the lead character of INU-OH, bringing their dynamic musical style to their performances. (You can read more about their experiences on those titles here.)

Today, we bring you their thoughts on Chainsaw Man, a series which has brought in a different high-profile artist for each episode’s ending theme. Avu-chan from Queen Bee gave us some insight about their experience working on this ambitious anime project as the artist for this week’s ending theme, “Violence.”

How did you feel when you were asked to be one of the theme song artists for Chainsaw Man?

I thought that the offer would come on its own to me, so I thought “I knew it!” I was so happy.

Knowing that you are one of multiple ending theme song artists for this series, did you experience any pressure or nervousness?

After submitting the songs, all that was left was for us to wait, so we’ve been looking forward to the episode we were responsible for gradually approaching. Being compared can be fun in a good way.

Have you been watching the Chainsaw Man anime? If so, what is your impression of the story? Do you have a favorite character?

I watch the anime and read the manga every week. With the anime series, every episode is very experimental, so I enjoy watching it very carefully.

My favorite character is Quanxi.

The title of your song is “VIOLENCE”. What kind of meaning did you try to convey through this song?

“VIOLENCE only for two” is the meaning we put behind the song. I would be happy if you could find each.

Are there any parts you want listeners to pay attention to?

I want listeners to forget about themselves and paying attention to anything, and instead want them to dance to their heart’s content.

Finally, do you have a message for all the QUEEN BEE and Chainsaw Man fans reading this interview?

Thank you so much for reading this interview! We want to play shows all over the world. And for that reason, I hope you will enjoy a lot of QUEEN BEE‘s songs, starting with “VIOLENCE.”

You can check out the song “VIOLENCE” through this link.

You can also look forward to Queen Bee‘s first new album in three years, “Twelve Dimension,” which will release in February 2023.

Denial of responsibility! Theinspi is an automatic aggregator around the global media. All the content are available free on Internet. We have just arranged it in one platform for educational purpose only. In each content, the hyperlink to the primary source is specified. All trademarks belong to their rightful owners, all materials to their authors. If you are the owner of the content and do not want us to publish your materials on our website, please contact us by email: [email protected] The content will be deleted within 24 hours.
Share. Facebook Twitter Pinterest LinkedIn Reddit Email
Previous ArticleYour Anime Rankings – Best of Fall 2022, Dec 10-16
Next Article PREVIEW: One Piece Odyssey