Meet the young couple who bought eight properties during the pandemic

Indy and Cory Mitchell bought eight properties during the pandemic, bringing the total number of homes they owned to 10.

That’s because they only bought properties where the income from rent was greater than the property’s expenses, which included maintenance, insurance, and loan repayments.

Cory Mitchell, who is 28, took a pretty blunt view of the property market: “If it’s not positively geared, it’s speculation.”

He said if landlords were topping up their rental incomes to keep up with home loan repayments, they were gambling on capital gains making their investment worth it, and to his mind, that was “a very risky strategy”.

“Especially with the interest rates going up, if the top-up you have to do every month or every week goes to a certain level you might be under a lot of stress,” he said.

“So you’re purely hoping the value of your property is going to go up in time, which it may or may not.”

Indy Mitchell, who is 29, said there were investors in the market who were at risk.

“People who bought in the last one to two years when the property market was booming and interest rates were low, and now interest rates have gone up.

“If they’ve bought negatively geared properties where they’re having to top up their mortgage, and if they have multiple of those, then I think now that interest rates are higher they will be hurting a little bit.” 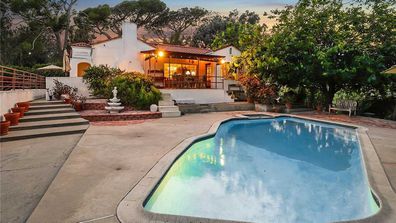 Home from Manson family murders goes up for sale

Where the Mitchells bought﻿

The couple owned three homes before the pandemic, which they had acquired relatively passively, by retaining their homes when they moved cities.

“We sold our property in Hamilton that we were living in, which was my first house,” Indy said.

“Following that we were just sort of looking for properties that were cash flow positive that needed a renovation – so something we could add value to.

“Then we would refinance, pull out the equity, and do it again.”

During the pandemic, the couple bought first in Dunedin, then Southland, then around Canterbury and the Waikato.

“Yields seemed to be better there. House prices were generally a little bit cheaper, and rents stacked up, so the cash flow was a lot better,” Indy said.

The couple haven’t bought anything recently because they say the numbers no longer add up – prices are too high, and rents too stagnant for investments to make sense.

“We had a really aggressive growth phase for about two years,” he said. “We got to a point where our lending got tapped out by the banks, so we couldn’t get any more money.

“And the deals that we were finding in the marketplace were getting a lot worse in terms of cash flow.”

The couple were now building their cash reserves back up, and intended to purchase again should the price-rental income balance improve and lending criteria for investors be relaxed.

Indy said the couple didn’t really care whether house prices went up or down, because for them rents would cover expenses, so they should not be forced to sell.

She said no one knew what the market, which saw its biggest drop in 27 years in 2022, would do next.

The Mitchells received mentorship from Michael Burge, who also recently said investors too often forgot “the cash flow principle”, and bought negatively geared properties, which they picked because they were similar to the homes the investors themselves lived in.

This story has been reproduced with permission from Stuff.co.nz.