‘My heart is in Chinatown’: Business owners optimistic as crowds return for Lunar New Year parade – BC | Globalnews.ca 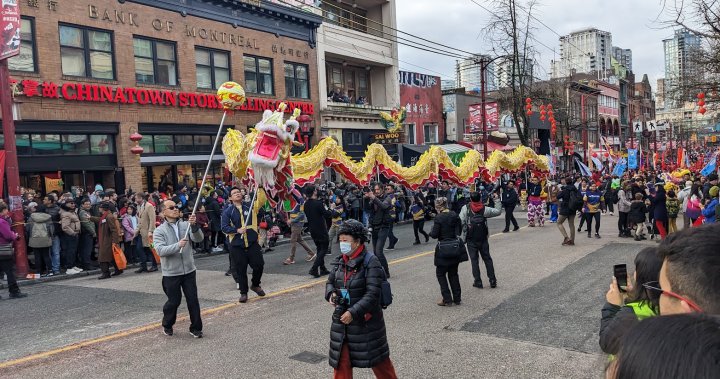 Business owners in Vancouver’s Chinatown are cautiously optimistic about the future after Sunday’s Lunar New Year parade brought massive crowds to the historic neighbourhood for the first time since 2020.

There were long lineups at New Town Bakery, where the dining room was packed and owner Susanna Ng and her staff got a taste of the hustle and bustle of the area’s former glory days.

“Finally, finally because we’re so desperate, when I see everybody moving out you know, when is my turn?,” Ng told Global News in an interview Sunday.

Ng, who has considered relocating her famous eatery known for its steam buns due to Chinatown’s ongoing decline, said she’s hoping COVID “will leave us forever” in 2023.


After three years of COVID-19 brought an increase in anti-Asian hate crimes, street disorder and graffiti, community leaders and business owners in Chinatown are hopeful the Lunar New Year crowds will help bring visitors back.

GMLK Gift Shop has been on Main Street for 17 years and Malik took over its ownership in 2017.

He said he was able to survive the pandemic with government supports, and is confident he’ll make it.

“Finally we are seeing a sign of hope, it’s Year of the Rabbit so we are hoping it’s a good year for everybody,” Malik said.

While the crowds are a positive sign, Kwok said there are still many vacant storefronts in Chinatown and it will take time to “bring the confidence back.”

“I’m optimistic, I want to be part of it and hopefully, people can come down here on a daily basis,” he said.

On Jan. 17, Vancouver council approved a $2.2 million Chinatown Action Plan to help revitalize the area, with a focus on cleaning and sanitation.

“It makes me happy that people will remember what Chinatown was like and what it can become,” Pender Street gym owner Ryan Diaz told Global News Sunday.

Diaz made a heartbreaking plea to councillors before the Jan. 17 vote detailing how difficult it was to follow his dream through the pandemic.

“It’s just so hard,” he told the council meeting through tears.


During COVID-19, Diaz said his gym was closed while the bills were still coming in.

“My mom put up her house for sale to help us keep going,” he said of the sacrifices his family made.

After the annual parade, Diaz said the teams of lion dancers perform outside local businesses to help bring prosperity and good luck for the upcoming year, and he feels lucky his gym was able to receive the traditional blessing in 2023.

Ng meantime, who has operated New Town Bakery’s flagship location on Pender Street since 1980, said if the situation gets worse, she’ll have no choice but to leave.

“If things get better, I don’t mind to stay,” she said.

“My heart is in Chinatown for almost five decades.”

Denial of responsibility! Theinspi is an automatic aggregator around the global media. All the content are available free on Internet. We have just arranged it in one platform for educational purpose only. In each content, the hyperlink to the primary source is specified. All trademarks belong to their rightful owners, all materials to their authors. If you are the owner of the content and do not want us to publish your materials on our website, please contact us by email: [email protected] The content will be deleted within 24 hours.
Canada Chinatown Chinatown crime Chinatown parade Chinatown parade returns chinatown revitalization Chinatown YVR Consumer Economy Features Lunar New Year Lunar New Year parade New Town Bakery politics Ryan Diaz Vancouver Chinatown World Year of the Rabbit
Share. Facebook Twitter Pinterest LinkedIn Reddit Email
Previous ArticleApple TV+ to Stream U.S.-French-Japanese Live-Action Drops of God Show
Next Article Son sent Snapchat minutes before his murder, prosecutors say