Oscars: ‘Everything Everywhere All at Once,’ ‘Banshees’ and ‘All Quiet on the Western Front’ Lead Nominations 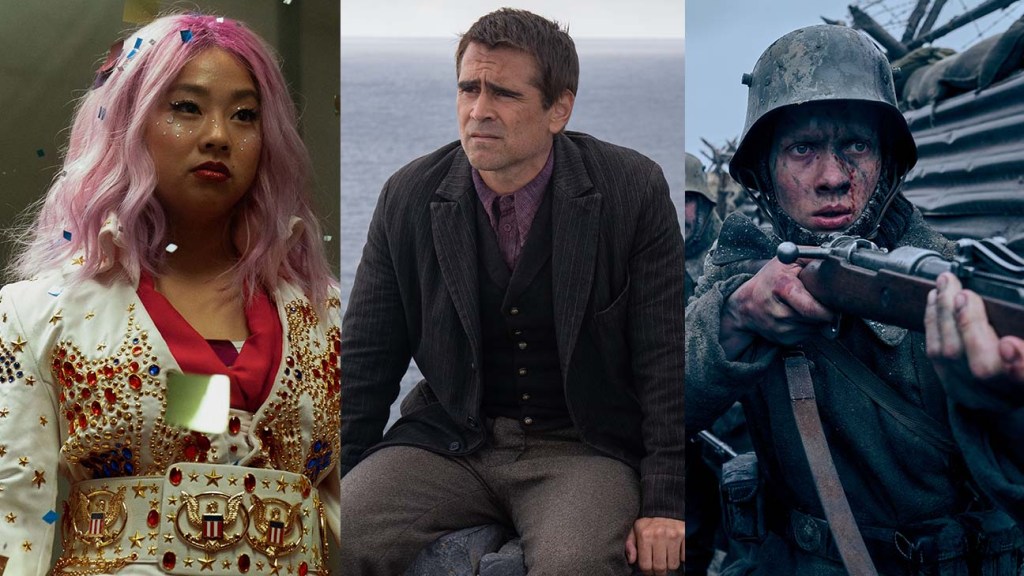 A24’s Everything Everywhere All at Once led the 95th Academy Award nominations on Tuesday morning, with the Michelle Yeoh-starring comedy picking up 11 nods, including best picture.

Everything Everywhere will face off for the Academy’s top prize alongside Netflix’s All Quiet on the Western Front, 20th Century Studios’ Avatar: The Way of Water, Searchlight’s The Banshees of Inisherin, Warner Bros.’ Elvis, Universal’s The Fabelmans, Focus Features’ Tár, Paramount’s Top Gun: Maverick, Neon’s Triangle of Sadness and United Artists’ Women Talking. (Read the full list of nominations here.)

The Banshees of Inisherin cast also made out well this year, with lead Colin Farrell earning a nod in the best actor category, Kerry Condon in best supporting actress, and Brendan Gleeson and Barry Keoghan in best supporting actor. Writer-director Martin McDonagh also earned nods for best director and best original screenplay. The Searchlight film picked up a total of nine noms.

Netflix’s All Quiet on the Western Front also earned nine noms, with the World War I film also taking a spot in the international feature category. Other foreign-language contenders include Argentina’s Argentina, 1985, Belgium’s Close, Ireland’s The Quiet Girl and Poland’s EO.

While the acting categories feature some expected names — including Elvis‘ Austin Butler, The Whale‘s Brendan Fraser and Tár‘s Cate Blanchett — there were still some surprises. Blonde star Ana de Armas earned a best actress nom for Netflix’s polarizing Marilyn Monroe biopic, while To Leslie star Andrea Riseborough’s grassroots campaign — which saw endorsements from A-list performers in the final weeks before voting closed — paid off. Both de Armas and Riseborough are first-time nominees and are nominated alongside Michelle Williams, who has earned her fifth Oscar nom for The Fabelmans.

In addition to Butler, Farrell and Fraser — the three frontrunners in the category — the best actor nominees include Aftersun‘s Paul Mescal and Living‘s Bill Nighy, both earning their first nominations.

Angela Bassett earned her second Oscar nomination for Black Panther: Wakanda Forever, which makes her the first performer to earn an Oscar nod for a Marvel film. Also represented in the supporting actress category is The Whale‘s Hong Chau. Alongside Gleeson, Keoghan and Quan are best supporting actor nominees Brian Tyree Henry for Causeway and Judd Hirsch for The Fabelmans.

A year after Jane Campion became just the third woman to win best director, the category once again has an all-male lineup: In addition to the previously mentioned Daniels and McDonagh, the nominees include Tár‘s Todd Field, The Fabelmans‘ Steven Spielberg and Triangle of Sadness‘ Ruben Ostland. All three directors were also nominated for their original screenplays (Spielberg was nominated alongside Tony Kushner). But while no female directors were nominated in the top category, both Laura Poitras and Sara Dosa were nominated in the documentary feature category for All the Beauty and the Bloodshed and Fire of Love, respectively. Domee Shi also earned a nomination for best animated feature for Pixar’s Turning Red.

Riz Ahmed, a 2022 Oscar winner for the live-action short film The Long Goodbye, and M3GAN star and executive producer Allison Williams announced the nominees in all 23 Oscar categories in a live presentation from the Academy’s Samuel Goldwyn Theater on Tuesday.

Denial of responsibility! Theinspi is an automatic aggregator around the global media. All the content are available free on Internet. We have just arranged it in one platform for educational purpose only. In each content, the hyperlink to the primary source is specified. All trademarks belong to their rightful owners, all materials to their authors. If you are the owner of the content and do not want us to publish your materials on our website, please contact us by email: [email protected] The content will be deleted within 24 hours.
Share. Facebook Twitter Pinterest LinkedIn Reddit Email
Previous ArticleOscars Diversity: ‘Everything Everywhere’ Propels Asian Acting Nominees to Historic High
Next Article Brooke Sansone: 5 Things To Know About Charlie Puth’s Girlfriend