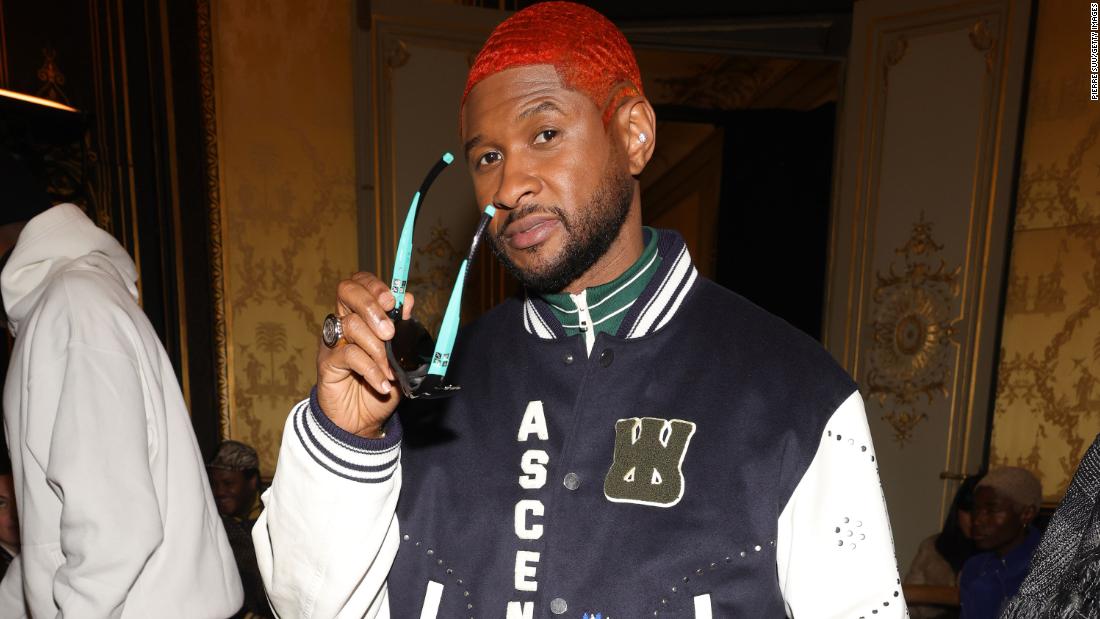 CNN Style is one of the official media partners of Paris Fashion Week. See all coverage here.

The menswear shows in Paris are underway and despite chilling temperatures and a debilitating transit strike, the fashion community is out in full force.

This season’s event, which ends Sunday, offers a number of firsts, including the unexpected debut of Usher’s brightly-hued hair and the much-awaited collaboration between Louis Vuitton and American designer Colm Dillane of KidSuper.

From celebrity sightings to standout collections, read on for our impressions from the shows so far.

The Grammy-award winning artist lit up the front row with his new head of flaming orange hair. Usher debuted his neon, ombre effect look on the first day of shows at Wales Bonner and was spotted again at Bianca Saunders the next day. Wearing the full opening look from last season’s runway, his attendance had photographers clamoring for a shot.

Geometric shapes, with a strong focus on triangles, was the starting point and the impetus for this season’s Homme Plissé Issey Miyake collection‚ showing the many iterations of how triangles and other angular elements can be twisted and manipulated into complex silhouettes and patterns.

Signature pleats, of course, were in abundance from pleated trousers to folded detailing on sleeveless shirts and coats, and larger, looser folds that fell from the shoulders on nylon outerwear.

The show was punctuated with dance performances that showcased how well the garments moved, as performers wove in and around a light show that featured — you guessed it — more geometric shapes.

Jenna Ortega, star of the Netflix series “Wednesday,” stepped out in a black hooded, backless gown for Anthony Vaccarello’s first men’s show for Saint Laurent in Paris. The halter-style dress, from the brand’s Spring-Summer 2023 collection, was reminiscent of Grace Jones’ iconic signature look. Sitting front row, the actor was visibly mesmerized by Charlotte Gainsbourg’s piano performance that closed the show.

Rick Owens is no stranger to statement shoes — his vertiginous Kiss platforms have become a cult item. This season, the American designer channeled orthopedic glam with a boot that offered a far chunkier silhouette up the leg, featuring thick padding held together with leather buckled straps. Chicest way to recover from a broken foot?

Spanish popstar Rosalía rocked the roof off the Louvre with her electrifying performance for the Louis Vuitton fashion show, which unveiled a new collection with its first guest creative director, Colm Dillane of KidSuper. The artist opened the show wearing an all-white oversized ensemble and walked the runway with a torch flashing the French brand’s iconic monogram before climbing up onto a yellow car and launching into a rendition of her hit “Candy.”

Music has always been important to Dries Van Noten. Keen followers will remember his Fall-Winter 2011 show, soundtracked by specially mixed David Bowie masters. This season, the Belgium designer explored 90s rave culture with a more grown-up sensibility. Guests went to a multi-level parking garage for the show, stacked with experimental musicians performing mellow techno beats, while beer was offered from a steel cart. At the top, Belgium duo Lander & Adriaan performed what the show notes called “sophisti-rave” on drums and synthesizers. The hypnotic soundtrack set the tone for the new collection that featured flora and fauna motifs, furry clogs, outerwear that ranged from tailored coats with nipped waists to oversized puffer jackets with abstract patterns, and roomy 90s-era cargo pants.

Junya Watanabe, well known for his extensive list of fashion collaborations, chose to celebrate the many brands he has worked with over the years — including New Balance, Oakley, North Face and Timberland — in a predominantly monochromatic collection. Also spotted on the runway was the unmistakable Tri-Ferg logo from Palace, the London-based skatewear brand, on a black part puffer part parka jacket. Another first.

Denial of responsibility! Theinspi is an automatic aggregator around the global media. All the content are available free on Internet. We have just arranged it in one platform for educational purpose only. In each content, the hyperlink to the primary source is specified. All trademarks belong to their rightful owners, all materials to their authors. If you are the owner of the content and do not want us to publish your materials on our website, please contact us by email: [email protected] The content will be deleted within 24 hours.
fashion Paris Fashion Week: Highlights from the Fall-Winter 2023 menswear shows - CNN
Share. Facebook Twitter Pinterest LinkedIn Reddit Email
Previous ArticleTwitter Has About 2,300 Active Employees, Elon Musk Says
Next Article European river fills with garbage after flooding