People Are FREAKING OUT That Julia Fox Truly Lives Like The Rest Of Us! – Perez Hilton 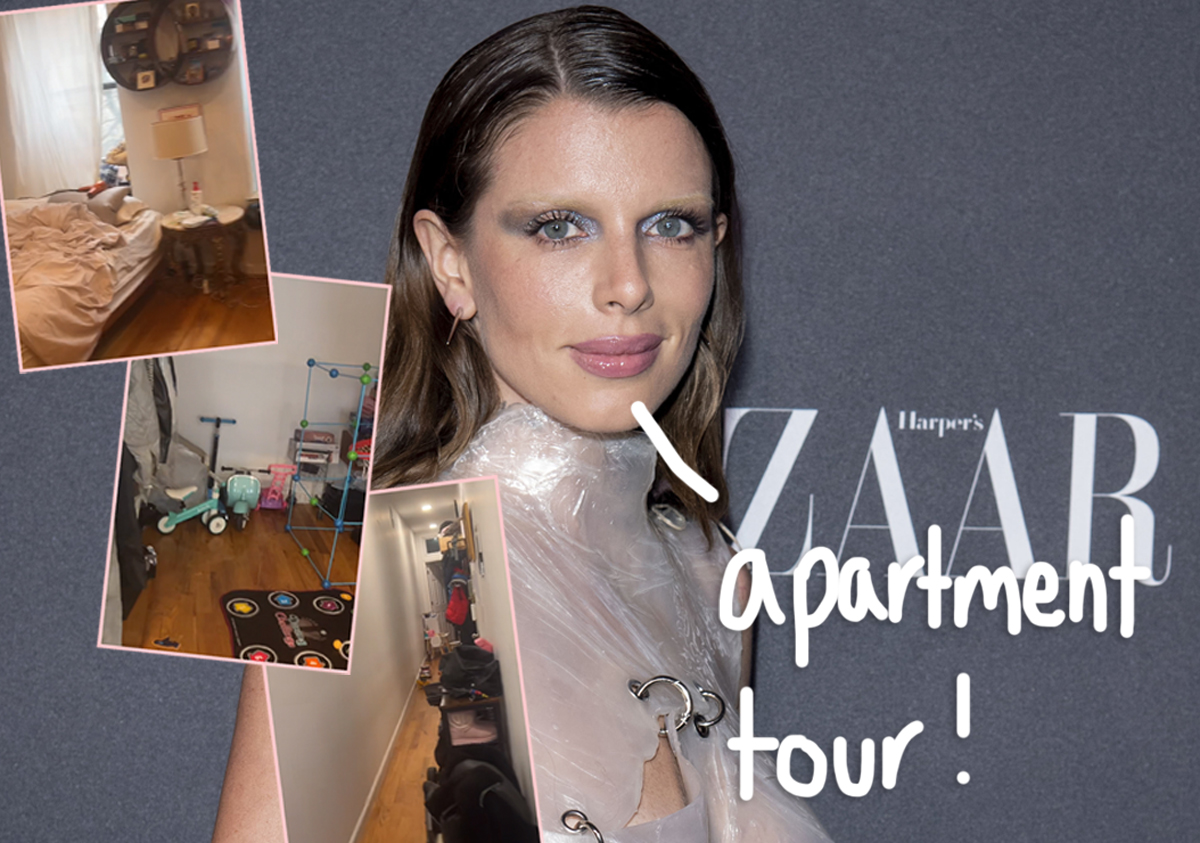 Julia Fox proved once again how much of a relatable and humble queen she is!

The 32-year-old actress decided to give her TikTok followers a tour of her New York City apartment, where she lives with her 2-year-old son Valentino — and people cannot believe she has SUCH a normal home despite being a celebrity. We are talking about how she’s living in a relatively small place (though big for New York City standards), complete with messy rooms and a “small mouse problem.” Julia began the video by saying:

“I never thought in a million years that I would do this, but I do believe in maximum transparency. So I’m going to give you guys an apartment tour. And I know I’m going to get roasted and whatever, but hopefully, maybe someone can watch this and be like, ‘Okay, well maybe I’m not doing so bad.’”

The Uncut Gems muse then proceeded to show everyone her living room, which she transformed into her bedroom, so her son could have “a little playroom.” She gave a glimpse of her slightly messy areas and unmade bed in the corner of the bedroom before showing off her “nostalgia mirror” filled with pictures of her son, friends, and loved ones who passed away. As she continued her tour, Julia went down a “very long hallway” that leads to the other side of her apartment and showed her “little bathroom,” saying:

Moving on to the kitchen, she asked people to not “judge” her for how cluttered it was at the time:

“Don’t judge me. I know it’s really messy. I also have shoe boxes in the kitchen, which is very common for New Yorkers.”

Right across from the kitchen, the model entered Valentino’s room, the space she “put the most effort” into decorating. It features a white loft bed, a bookshelf, and various toys on the floor. Despite the adorable room, Julia said her son does not spend too much time there or even sleeps in his bed often since he’d rather be with his momma. AWW!

And if her small apartment wasn’t relatable enough, Julia also revealed to her fans that the place has a “mouse problem” that she doesn’t plan on getting rid of anytime soon because they “come out and clean up the crumbs that my son drops on the floor.” LOLz! As for why she doesn’t have a lavish and bigger home? Julia explained:

“For me personally, I just don’t like excessive displays of wealth. They make me feel icky, you know, especially people who have really big houses. It’s just wasteful when there’s so many homeless people in this country, and I just am not really like that.”

You have to see this place for yourself! Ch-ch-check it out below:

Come with me on a very underwhelming apartment tour! also to clarify I have only ONE mouse and he’s cute ????

Architectural Digest most likely won’t be phoning Julia right now! But for everyone else? They are beyond obsessed and applauded the mom for having a relatable home. People took to the comments section of the viral video, writing:

“Julia fox is the most normal celebrity I have ever seen. She deserves it all for her honesty and transparency. We love u juju foxy”

“the level of realistic is astounding. I feel like I’m looking at my own apartment”

“You’re apartment is literally my apartment, I feel so seen rn”

“So nice to see that your place is not curated museum-like flat, but a really cozy place where you actually live and enjoy.”

“You’re SO normal. And your apartment is lived in. And I f**cking love it.”

“So nice to finally see a celeb home that actually feels lived in.”

“Your a mother that obviously prioritizes your child & it is a beautiful apartment. Love you are showing that success looks different for every person.”

And that’s not. Others have also taken to Twitter to share their thoughts on the apartment! See the tweets (below):

I can’t help but laugh at Kanye walking into Julia Fox’s apartment for the first time. If he threw out all Kim’s old clothes , I KNOW he wanted to throw that whole apartment away LOL ????????

Julia Fox’s apartment has 0 semblance of a single vibe, aesthetic, or curation and that is truly the coolest thing ever

julia fox’s apartment tour made me feel seen and understood

who knew julia foxes apartment tour would make me a stan. she’s like the most normal fucking celebrity ever like i think our apartments are the same size ????????????

What are YOUR reactions to Julia’s apartment, Perezcious readers? Let us know in the comments below!

Denial of responsibility! Theinspi is an automatic aggregator around the global media. All the content are available free on Internet. We have just arranged it in one platform for educational purpose only. In each content, the hyperlink to the primary source is specified. All trademarks belong to their rightful owners, all materials to their authors. If you are the owner of the content and do not want us to publish your materials on our website, please contact us by email: [email protected] The content will be deleted within 24 hours.
Share. Facebook Twitter Pinterest LinkedIn Reddit Email
Previous ArticlePathe, Logical Pictures Sign Three-Year Co-Production, Co-Financing Deal to Enlist Private Investors (EXCLUSIVE)
Next Article Homosexuality is a sin but not a crime, Pope says