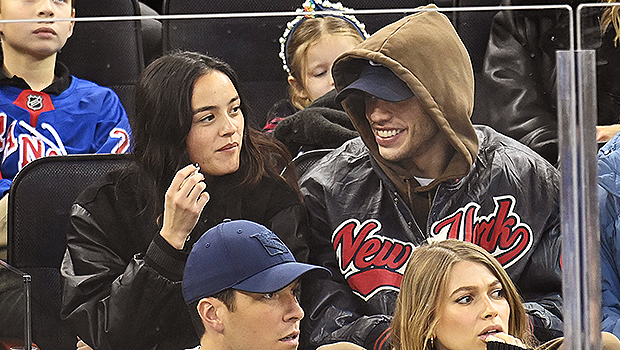 Pete Davidson and Chase Sui Wonders are doing nothing to put those dating rumors to rest during their romantic vacation in Hawaii this week. The Bodies Bodies Bodies co-stars were photographed looking absolutely smitten as they made out on the rocky shore of the tropical paradise next to lush green vegetation in photos obtained by the Daily Mail that can be seen here. At one point, the former Saturday Night Live comedian, 29, wrapped his right arm around the 26-year-old actress’ behind as she lovingly wrapped her left arm around his tatted neck while they shared a passionate smooch.

The couple didn’t just kiss a few times — they were seen displaying all sorts of affection toward one another all day long. For instance, they seemed focused on nothing but each other as they walked along the gorgeous Pacific coastline hand-in-hand and arm-in-arm. They laughed and smiled during their private conversations, Chase took pics of Pete, and at another point, she sat on his lap.

Of course, neither of them has confirmed that they are dating, but this very public PDA certainly isn’t proving they’re just friends. Plus, these new smooching snaps came just one day after others were captured by Page Six from the same vacation.

Pete and Chase have known each other since they began filming Bodies Bodies Bodies in 2021 and have been seen out and about together several times, from shopping at Whole Foods in New York City together to attending a New York Rangers game with their co-star Rachel Sennott. Both sightings occurred in Dec. 2022, when Pete was linked to model Emily Ratajkowski, 31. Plus, a representative for the King of Staten Island creator claimed that he and Chase were merely friends who enjoy each other’s company. “Chase and Pete are great friends and they have been since they met filming Bodies, Bodies, Bodies,” they told TMZ at the time.

However, once Emily and Pete were officially through, romance rumors rant rampant when Pete and Chase were seen getting cozy in a New York City cafe at the beginning of January. Less than two weeks later, they were seen looking giddy as they held hands in Universal Studios (photo seen here).

The loved-up vacation pictures have also hinted that Pete has moved completely on from his relationship with Kim Kardashian, 42, who he dated for nine months between 2021 and 2022. Eagle-eyed fans noticed in the paparazzi photos that Pete’s collection of tatts for the single mom of four have completely disappeared. He previously had ink that read “My girl is a lawyer” on his collarbone, the initials of Kim’s kids, and an Aladdin-inspired tattoo, which commemorated their first kiss on SNL.

Denial of responsibility! Theinspi is an automatic aggregator around the global media. All the content are available free on Internet. We have just arranged it in one platform for educational purpose only. In each content, the hyperlink to the primary source is specified. All trademarks belong to their rightful owners, all materials to their authors. If you are the owner of the content and do not want us to publish your materials on our website, please contact us by email: [email protected] The content will be deleted within 24 hours.
Share. Facebook Twitter Pinterest LinkedIn Reddit Email
Previous ArticleMinecraft Legends And Its Massive Multiplayer Sieges Release In April
Next Article Kodansha USA Licenses My Home Hero Manga