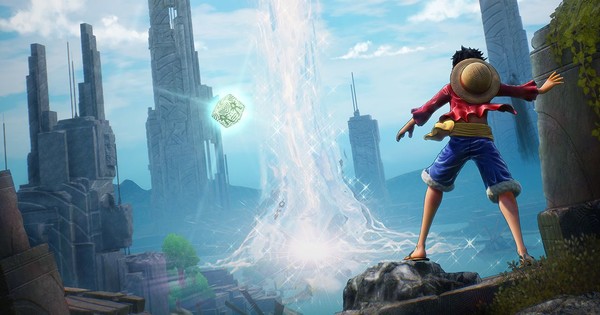 With One Piece set to celebrate its 25th anniversary, Bandai Namco is pulling out all the stops to ring in its birthday with the biggest, grandest adventure the Straw Hats could ever face. The result of their efforts is One Piece Odyssey, a JRPG set to release this upcoming January 12th. We were lucky enough to sit down to test-drive the game.

Taking place in an indeterminate time during the Straw Hats’ adventures, they crash-land upon the mysterious Waford Island. A young woman named Lim snatches away the Straw Hats’ memories, leaving them incapable of using their powers. With her magic, the Straw Hats set off on an adventure to regain their memories while exploring their own recollections and previous adventures.

In a creative twist, One Piece Odyssey isn’t an action game—instead, as mentioned, it’s a JRPG. Much effort is put into making the Straw Hats’ attacks as big and flashy as they are in the anime and manga while ensuring every fight is on a fittingly-grandiose scale. When you enter a battle, your four active party members get a certain number of monsters grouped around them. As typical for a JRPG, you can take various actions in a fight; attacking enemies, using an item, defending, or trying to escape the battle. In a move akin to Final Fantasy X, swapping a Straw Hat out for a party member in reserve at any moment is possible. Each character focuses on specific skills, so Tony-Tony Chopper focuses on healing, Zoro’s attacks can deal extra damage over time through the Bleed status ailment, Nico Robin’s attacks can stun enemies, and Usopp’s attacks can inflict a variety of other status ailments. So far, it’s a good framework for a JRPG, and the pacing is good.

But Bandai Namco was also concerned with keeping the game fresh for players, so many mechanics change the tide of battle. Some normal attacks can knock enemies into each other, tacking on extra damage to whole groups. There’s a rock-paper-scissors system involving Power-, Technique-, and Speed-type characters, wherein you can deal additional damage to monsters through the attacks of specific characters. So Zoro, being a Technique-type, can deal extra damage to Power-type characters. This encourages players to constantly swap party members to maximize damage toward enemy mobs. 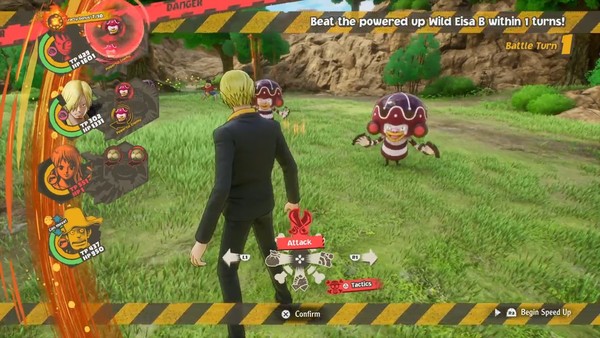 There is also the Dramatic Scene system, wherein sometimes a fight will throw a specialized condition at players. In one battle we played through, we were given a Dramatic Scene wherein a troop of monkeys were about to gang up on Usopp; we had to keep Usopp alive before the swarm overpowered him. Defeating the swarm granted us a temporary status boost for the rest of the fight and bonus experience at the end. While Dramatic Scenes aren’t exactly common, they’re frequent enough to ensure that even fights against enemies you’ve seen countless times remain fresh. All in all, while the battle system isn’t the most original take on turn-based battles, it’s looking to be very inspired.

Powering up isn’t just a matter of grinding in battles, either. Exploring maps can find memory boxes that are associated with your crewmates. Once your party members reach a certain level, they remember specific abilities; attaching memory boxes to them can make the moves stronger. You’ll only have so many boxes to distribute for each character depending on your exploration, so players must be strategic with their resources. Thankfully, memory boxes can be swapped around your skills whenever you’re not fighting. 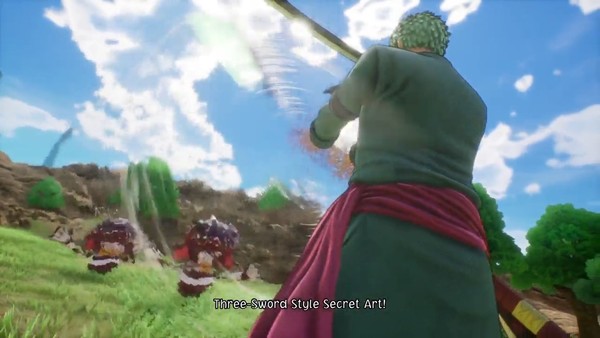 As for exploration, the game takes advantage of the individual Straw Hats as much as possible. Each crewmate has powers that let them overcome different obstacles. In our limited playtime, we experimented with some of them: we used Luffy’s rubber limbs to punch down walls, grab items from afar and latch onto grappling points, while Zoro’s swordplay let us cut down walls Luffy couldn’t smash.

The other characters are expected to have their own map abilities that will be revealed later. There is also an “Observation Haki” ability to scan your immediate surroundings. During our playtime, this served handy for identifying particularly powerful enemies that could grant extra experience.

This is handled with visuals that perfectly capture Eiichiro Oda‘s signature art style. Enemies sneer and give askew glances at the camera, and Luffy’s crewmates give wild takes when he says something stupid. Regarding recreating One Piece‘s spirit, One Piece Odyssey is set to pull it off with flying colors. Mark us as impressed with what the game has in store for us. One Piece Odyssey will be available this January 12th for the PlayStation 4, PlayStation 5, Xbox Series X/S, and Microsoft Windows.

Denial of responsibility! Theinspi is an automatic aggregator around the global media. All the content are available free on Internet. We have just arranged it in one platform for educational purpose only. In each content, the hyperlink to the primary source is specified. All trademarks belong to their rightful owners, all materials to their authors. If you are the owner of the content and do not want us to publish your materials on our website, please contact us by email: [email protected] The content will be deleted within 24 hours.
Share. Facebook Twitter Pinterest LinkedIn Reddit Email
Previous ArticleMeet the Artist of Chainsaw Man Episode 11’s ED
Next Article Hands-On with Like a Dragon: Ishin!