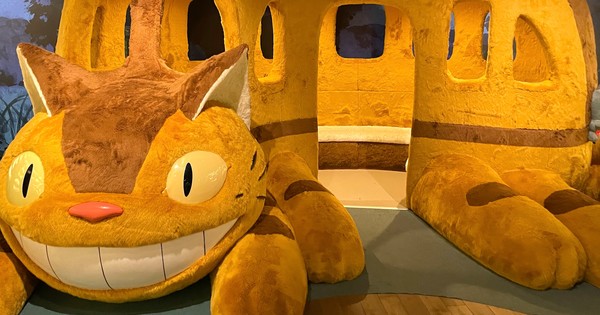 Welcome to Totoroland! Well, not exactly … 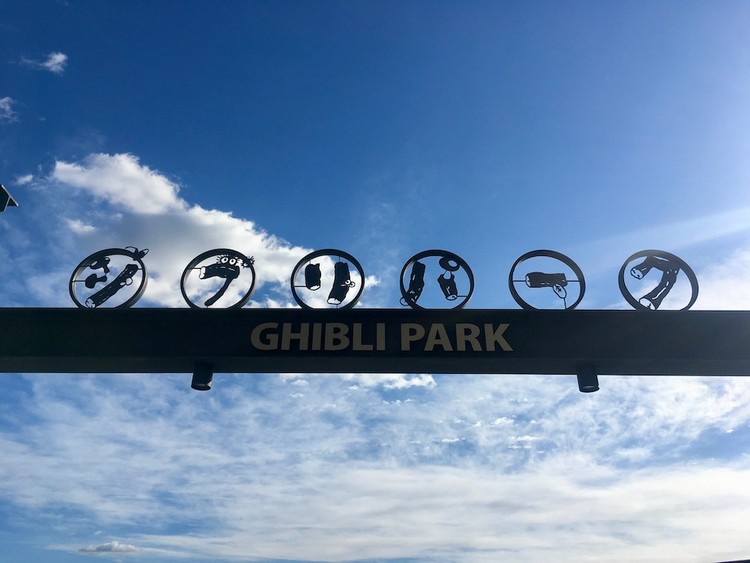 First things first: The Ghibli Park opened on November 1 as the only theme park dedicated to Studio Ghibli‘s movies, but don’t expect it to be Ghibliland or the Magic Kingdom at Hayao Miyazaki World. Ghibli Park’s head Goro Miyazaki — the son of studio founder Hayao Miyazaki and an anime director in his own right — made that clear: It is not a traditional amusement park, so no thrill rides or costumed mascots. (Although plenty of fans do come cosplaying as Nausicaä, Laputa‘s Pazu and Sheeta, Kiki, Spirited Away‘s Chihiro, and so on.) 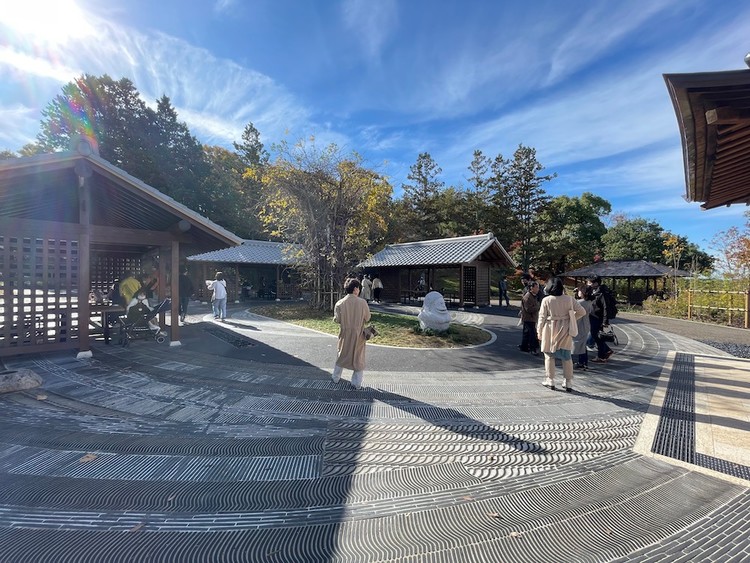 Instead, the builders dreamt of a park where grownups and children can wander and explore at their own pace, making discoveries on their own. To that end, the builders erected Ghibli Park in an actual park—the green, growing kind where visitors can well, touch grass. 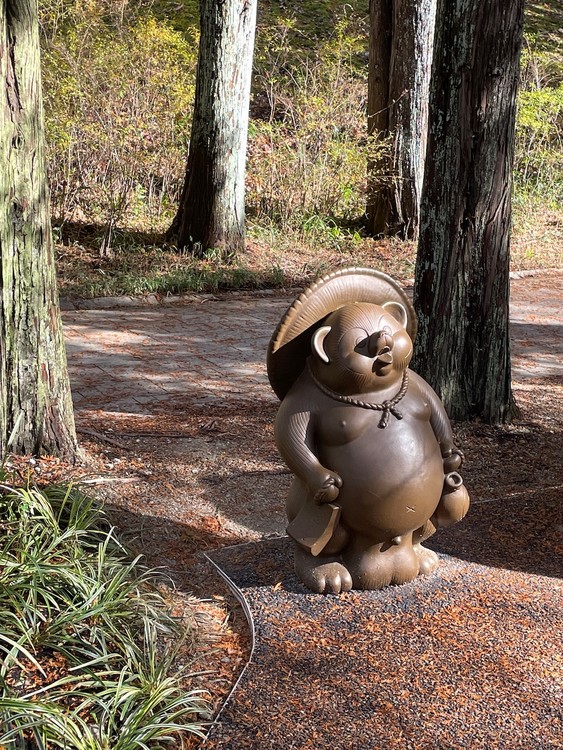 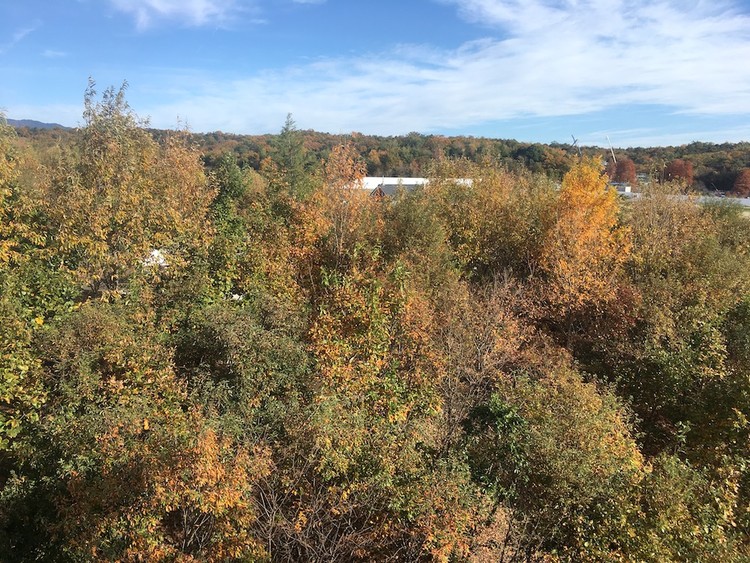 The existing Expo 2005 Aichi Commemorative Park already boasted a life-size recreation of the home in My Neighbor Totoro since the 2005 World Expo, so the Ghibli Park builders simply erected more areas that pay homage to Ghibli movies. 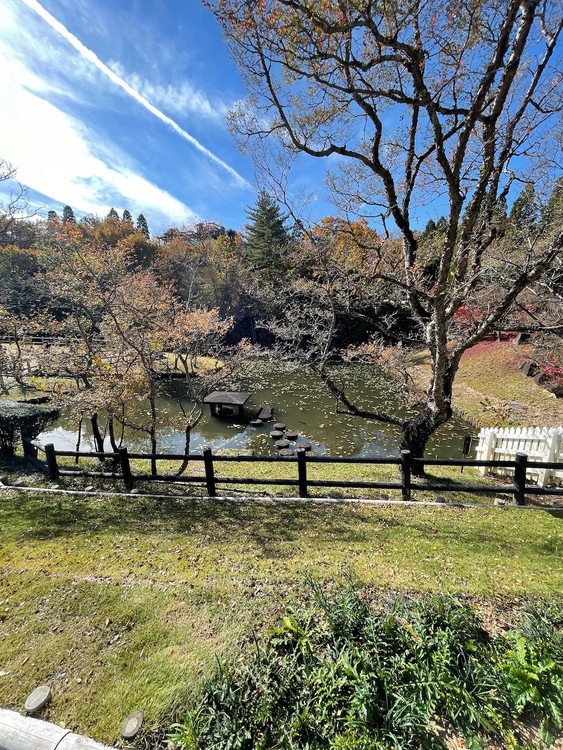 The park held its grand opening last month (two years behind schedule) with three areas ready for the public: the Dondoko Forest, Ghibli’s Grand Warehouse, and Hill of Youth. (The Mononoke Forest and Valley of Witches areas are slated for late 2023 and March 2024, respectively.) Take a peek at two of the open areas:

The Dondoko Forest centers around the existing “Satsuki and Mei’s House” from Totoro. Here, visitors step back into the 1950s in the Japanese countryside:

The Dondoko Forest also has a Dondoko-do playground for kids: 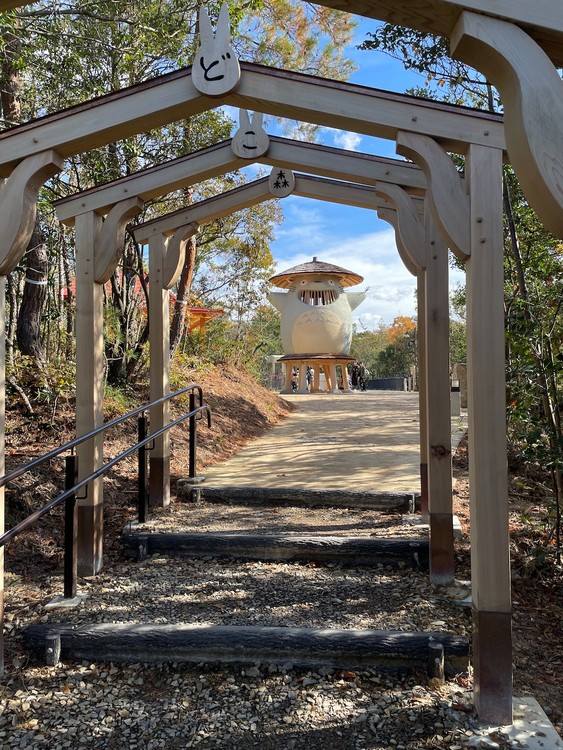 Ghibli’s Grand Warehouse is by far the most packed area of the park, by the number of sights and also by crowds. (The park advises visitors to allot twice as much time for this area than the others.) 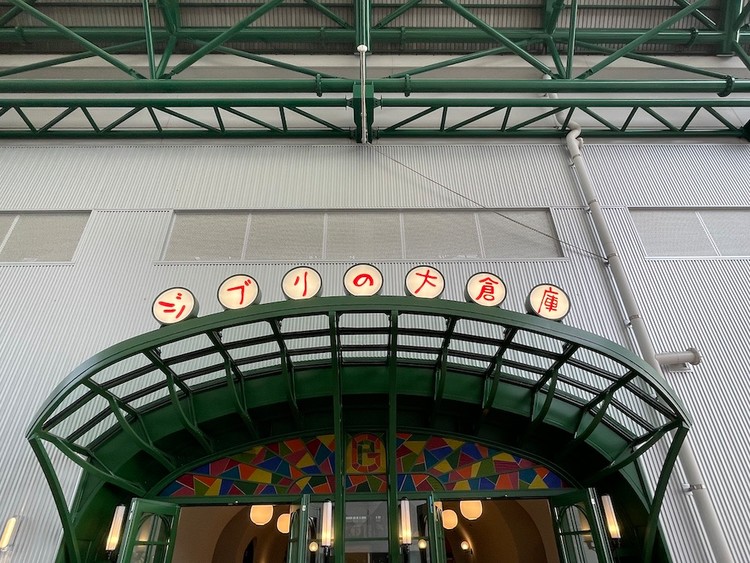 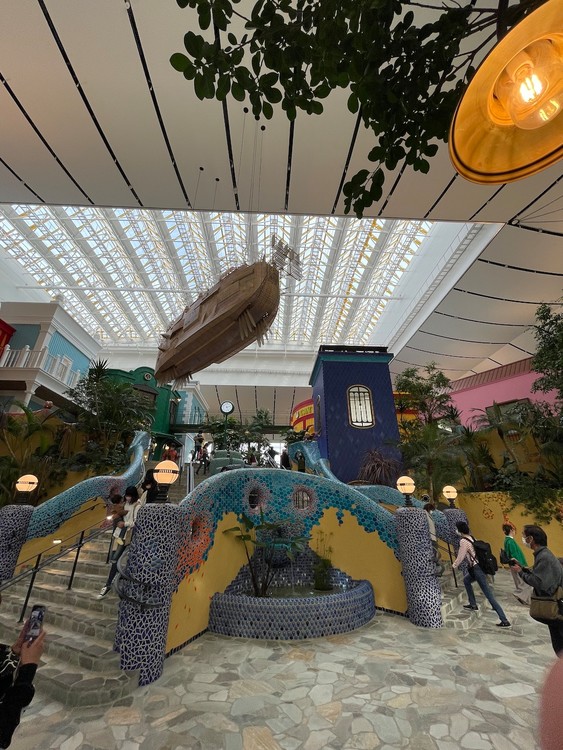 In this area, the longest line was for the “Becoming Characters in Memorable Ghibli Scenes” exhibition, in which visitors can plop themselves in selfie-worthy scenes from the movies:

The Warehouse has two other opening exhibitions for its first year of operations. The “Delicious! Animating Memorable Meals Expanded Edition” exhibition serves up the delectable (mockups of) cuisines and dishes seen in Ghibli movies, but unfortunately, it prohibits cameras. The third opening exhibition, “Ghibli’s Collections,” showcases the countless languages and ways we can enjoy Ghibli movies:

If you’re wondering where the Ghibli’s Grand Warehouse name came from, the center of the area is an actual, functioning “Open Warehouse.” It stores all manners of props from past traveling exhibitions and Tokyo’s Ghibli Museum. (Goro Miyazaki was also the first head of the museum.) Imagine if Raiders of the Lost Ark ended at Studio Ghibli‘s cellar:

Another section shrinks visitors down to a few centimeters into The Secret World of Arrietty:

Arguably the biggest attraction for adults? The only Catbus on permanent display that grown-ups can get in: 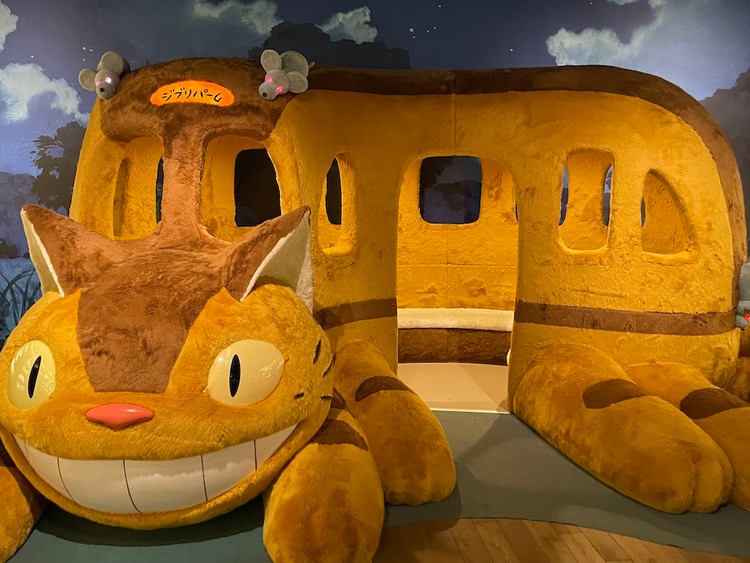 (There’s another giant feline in the Warehouse’s Cat Bus Room for kids, and the first one ever for kids at the Ghibli Museum in Tokyo.)

Much like the Ghibli Museum has a “false reception desk” manned by Totoro, the Warehouse has a “false director’s room” with Spirited Away‘s Yubaba (supposedly) in charge. (The Yubaba line was too long at the Park, so the Yababa photo below is from the “Ghibli Park and Ghibli Exhibition” at the Aichi Prefectural Museum of Art.) 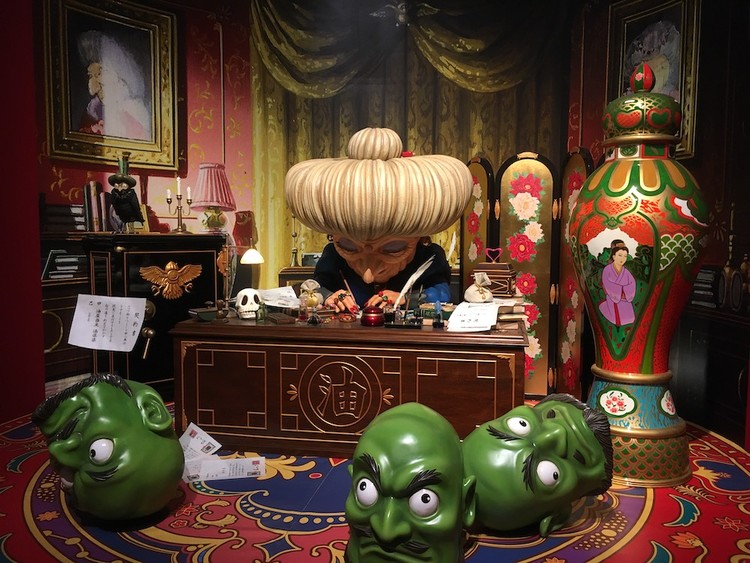 The rest of the Warehouse features photo-ops with Totoro, a mini Minami-machi street with nostalgic 20th-century shops, the Adventurous Flying Squadron gift shop with too much to spend on, the Siberi❆An milk stand with The Wind Rises‘ Siberia castella cakes, and more. The mini Cinema Orion theater screens the same 10 anime shorts that were once exclusive to Ghibli Museum in Tokyo (except for rare event screenings).

Finally, looming in the “Garden in the Sky” is a robot soldier from Laputa: Castle in the Sky, presumably hibernating for when it must join the other life-size robots to defend Japan. 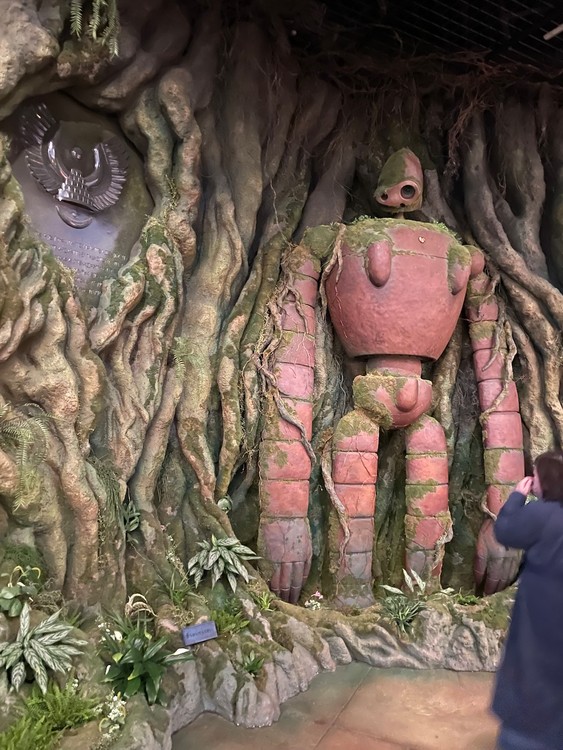 One can spend an entire afternoon at the Ghibli Park and still not see everything. Just like the older Ghibli Museum, the Ghibli Park deliberately hides Easter eggs where kids can squeeze into, but their oversized guardians can’t. It may be the only major theme park that closes promptly at 5 p.m., leaving all dreaming of their next visit.

Thanks to Kenneth Liu and Lillian Lee for most of the photos!

Denial of responsibility! Theinspi is an automatic aggregator around the global media. All the content are available free on Internet. We have just arranged it in one platform for educational purpose only. In each content, the hyperlink to the primary source is specified. All trademarks belong to their rightful owners, all materials to their authors. If you are the owner of the content and do not want us to publish your materials on our website, please contact us by email: [email protected] The content will be deleted within 24 hours.
Share. Facebook Twitter Pinterest LinkedIn Reddit Email
Previous ArticleInterview: Denji, Aki, Power, and Makima Dub Actors Discuss Smash-Hit Anime Chainsaw Man
Next Article Production I.G and Studio Wit President George Wada