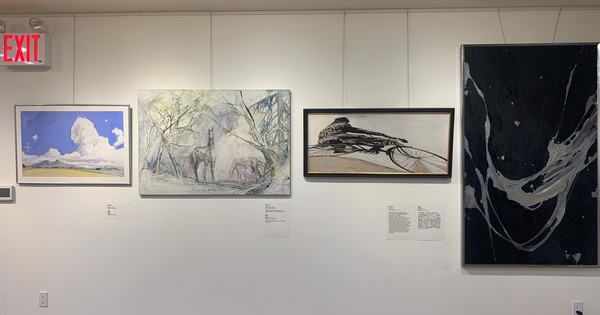 The excitement of Anime NYC 2022 extends beyond the Javits Convention Center. The otaku festivities spread throughout Manhattan, from multiple afterparties to an Attack on Titan takeover. One of Anime NYC‘s more inconspicuous yet interesting off-site events this year is the art exhibition “Shichirō Kobayashi: Drama of Light and Shadow.”

Located on the seventh floor of the Nippon Tower on 57th Street, finding this exhibit is a bit of a trek from the Javits. When I went on opening day (Wednesday, November 16), the doorman accidentally directed me to the wrong floor. The room was empty when I visited except for a few staffers and one special guest, though they expected more people to check it out over the weekend. 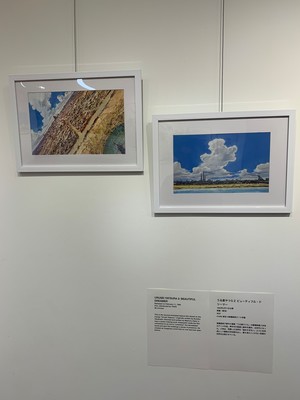 Kobayashi, who passed away at 89 years old on August 25 was an anime background painter from 1964 to 2011. This exhibit showcases a selection of his anime work and some of his paintings from before, during, and after his lengthy anime career. The exhibit’s anime include familiar classics, like Urusei Yatsura and Revolutionary Girl Utena, and others less well-known among American fans, such as The Adventures of Gamba and Remi. It’s a small exhibit that only covers a fraction of Kobayashi’s work (there are no paintings here from The Castle of Cagliostro or Berserk to point out two significant omissions). 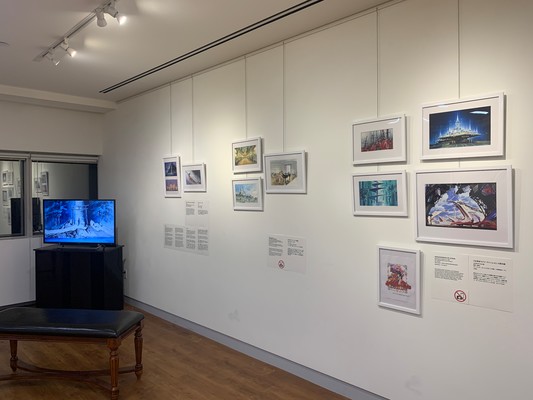 In addition to the paintings, there are two video screens in the exhibit. One cycles through anime screencaps, but the other might very well be the thing most visitors will want to spend time on here: his 26-minute 2013 “picture book on film” Red Candles and the Mermaid. Adapting the 1921 tragic children’s fairy tale by Mimei Ogawa, this 26-minute video features a series of illustrations by Shichirō Kobayashi and narration from his wife, Ayako Kobayashi. 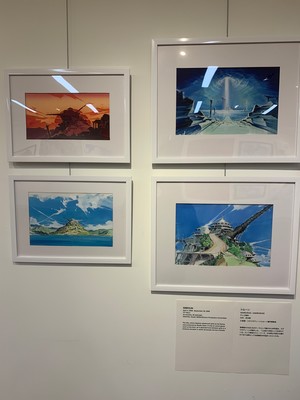 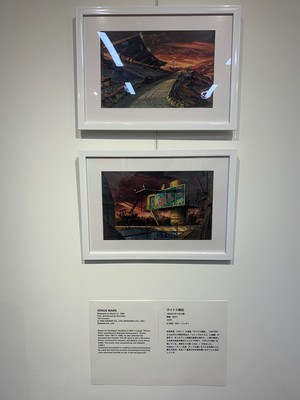 The significant artistic takeaway from looking at all these paintings together is that even as trends in anime have changed, Kobayashi entered the industry with a fully-formed style that never really needed to change. The characters in the ’70s cartoon mouse adventure Gamba, the gritty ’80s sci-fi Venus Wars, and the ’00s yuri Simoun don’t look anything alike, and appear distinctly of their era, but Kobayashi’s detailed watercolors remain timeless. Even his personal work, which at times leans towards greater abstraction, appears to have emerged fully formed; you could never guess which of his paintings are from the ’60s and just last year without checking the labels. 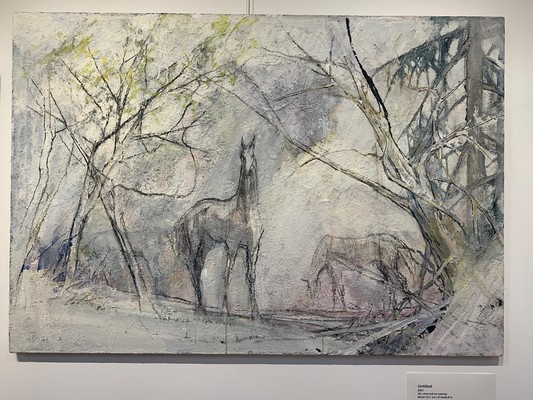 Upon leaving the exhibit, I greeted a guest I wasn’t expecting to run into: Ayako Kobayashi herself. I asked her which of the anime in the exhibition she considers her favorites; she answered with both Gamba and Utena. I was already a fan of the latter, while I hadn’t even heard of the former before this exhibition. And now I’m increasingly curious to watch it (paging Discotek…).

Denial of responsibility! Theinspi is an automatic aggregator around the global media. All the content are available free on Internet. We have just arranged it in one platform for educational purpose only. In each content, the hyperlink to the primary source is specified. All trademarks belong to their rightful owners, all materials to their authors. If you are the owner of the content and do not want us to publish your materials on our website, please contact us by email: [email protected] The content will be deleted within 24 hours.
Share. Facebook Twitter Pinterest LinkedIn Reddit Email
Previous ArticleYour Anime Rankings – Best of Fall 2022, Nov 12-18
Next Article Hero of a Lost Era: Examining the Context of Kamen Rider Kuuga