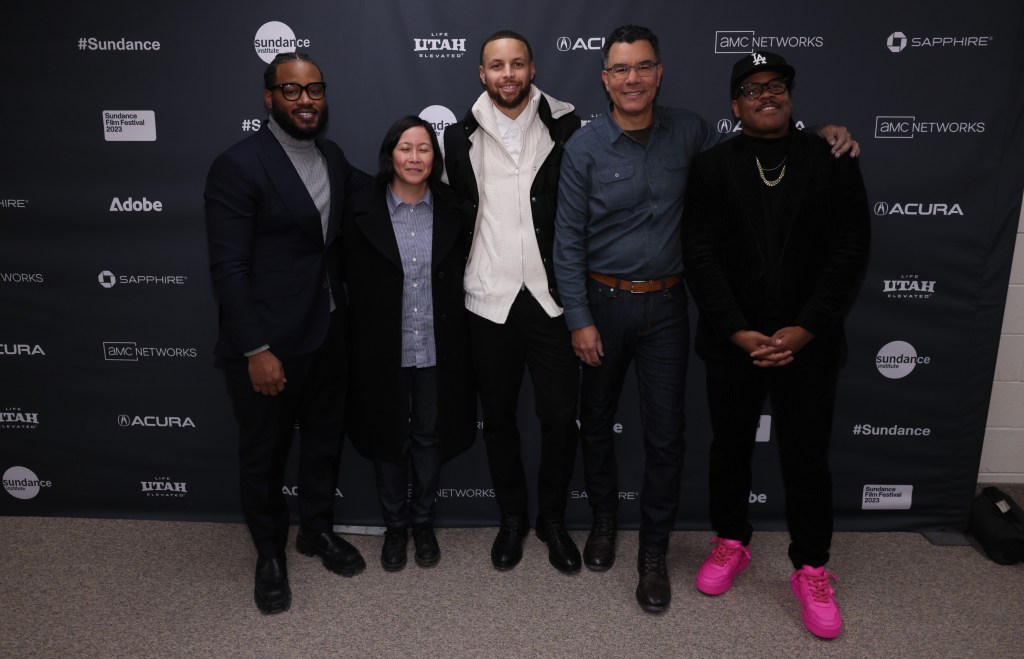 The NBA icon fielded a two-part question on Monday night in Park City during the audience portion of the post-screening Q&A of his Sundance Film Festival title Stephen Curry: Underrated.

Part one: How has your faith inspired you to get to where you are today? Part two, directed at Curry and producer Ryan Coogler who joined him at center stage: Are you going to be cast in Black Panther 3? After Kolby Mac from Minorities Report got both questions out, Curry nearly doubled over with laughter.

“You tell him if we can see if we can shoot it in the summer and find a nice role for me in that universe — absolutely,” Curry said to lots of laughter from the capacity crowd inside Eccles Theatre. “You put the pressure on, and we’ll see what he says.”

Coogler actually didn’t say anything on the subject as Curry immediately turned his attention back to part one.

“Faith is a huge part of my background. It’s a huge part of how you find purpose in life and knowing that there’s something greater than yourself. There’s a lesson to be learned. There’s a way to affect somebody to your left and to your right, whether it’s one person, whether it’s an auditorium filled of amazing people like yourself or whether it’s the stage that I have,” offered Curry, joined at the world premiere by wife Ayesha Curry, mother Sonya Curry and several Davidson teammates like Thomas Sander and Andrew Lovedale who appear in the doc. “Every day I step on the court with people watching, I represent God, I represent my family, I represent the people that have poured into me. It’s not about me. My faith has been a huge part of maintaining that foundation and understanding that we’re all in this Earth for a reason, that is to lift each other up and spread positivity, love.”

Coogler and Curry were joined on stage by the filmmaker Pete Nicks, Curry’s Davidson Wildcats head coach Bob McKillop, producer Erick Peyton and former Wildcat and longtime Curry best friend Jason Richards. While he sidestepped the Black Panther question, Coogler did open up on why it was important for him to be involved in bringing the doc to the screen.

Stephen Curry: Underrated is an intimate look at the NBA superstar’s “improbable coming of age at tiny Davidson College, where, under the wing of coach Bob McKillop, the team made a thrilling run in the 2008 NCAA tournament. With access to Curry throughout the 2021 season, the film also weaves the Golden State Warriors’ attempt to win another NBA championship following one of the worst seasons in franchise history.” [Spoiler alert: They won.]

The behind-the-scenes glimpse offers insight into Curry’s personal life as he juggles the demands of a superstar career with fulfilling a promise he made to his mother when he left Davidson early in favor of a career in the NBA that he would eventually get his college degree. There are also plenty of adorable moments of his home life, especially scenes featuring his son Canon W. Jack Curry.

Coogler continued by saying that through the process of making the film, many themes of Curry’s life story resonated with him, like chasing an unlikely dream, that “it chokes me up thinking about it.” Coogler admitted to “being a mess” rewatching the scenes play out, like the epic, star-making turn at Davidson’s 2008 Final Four run and the most recent Warriors championship victory.

“For me, the film speaks to what it’s like to chase the dream and how people who are successful in chasing them never do it alone. I love being a part of this movie. It was an honor to share it with you all,” Coogler concluded of the night. All around it was an electric screening during which the audience erupted with applause several times during some of Curry’s biggest victories and gave the NBA star two standing ovations. “It just made all the sense in the world. We were in it from the jump.”

And if tonight is any indication, consider Curry as a part of Black Panther 3 from the jump, too.

Denial of responsibility! Theinspi is an automatic aggregator around the global media. All the content are available free on Internet. We have just arranged it in one platform for educational purpose only. In each content, the hyperlink to the primary source is specified. All trademarks belong to their rightful owners, all materials to their authors. If you are the owner of the content and do not want us to publish your materials on our website, please contact us by email: [email protected] The content will be deleted within 24 hours.
Share. Facebook Twitter Pinterest LinkedIn Reddit Email
Previous ArticleMandhana, Harmanpreet, Renuka In ICC Women’s ODI Team Of The Year | Cricket News
Next Article “Not Consulted”: Top Wrestlers Unhappy With Sports Ministry’s New Committee | Wrestling News