‘The Bachelor’: Zach Shallcross on His Premiere’s “Forced Kiss” and Being Called the “Boring Bachelor” 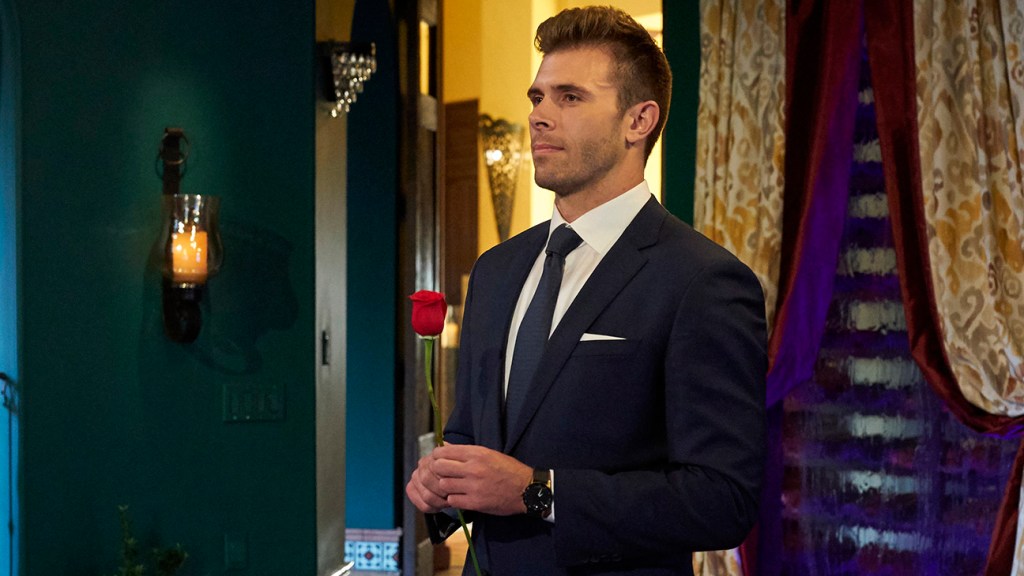 [Warning: This story contains spoilers from the season 27 premiere of The Bachelor.]

Zach Shallcross‘ season of ABC’s The Bachelor got started with the usual limo meet-and-greets, one abrupt exit and no shortage of kissing.

Shallcross, who got his heart broken by Rachel Recchia during the previous season of The Bachelorette, had his own drama to deal with during Monday’s season 27 premiere. The episode included Shallcross sharing a lengthy and public kiss with Greer Blitzer before giving her the first-impression rose, along with him saying goodbye to Madison Johnson after she initiated a kiss that was not well-received.

During an interview with The Hollywood Reporter, Shallcross discussed how he felt about some less-flattering reactions to the news that he was the show’s lead, why Blitzer earned the coveted rose, whether it’s important to know his partners’ politics and how his uncle Patrick Warburton helped prepare him for TV scrutiny.

Was it a strange process to see the show’s fans reacting to the news that you were cast as the new Bachelor?

Definitely. Where do I start with that? It was already shocking that I learned that I was the Bachelor. It never really settled in. It took some time to be like, “Wow, like this is actually happening to me.” And then you do see the reactions from viewers and fans; there’s the supportive ones, and then there’s the not-so-supportive ones. That was definitely a tough thing to get used to. But it is crazy to me because I just lived this experience and am very happy. The often-visceral reaction from the fans is a little intense. It has been pretty unique, just seeing the whole array of different reactions, either for me or against me.

You left Rachel’s season after an off-camera conversation from the fantasy suite, and apparently religion and politics were discussed. Did that situation impact how you approached your own relationships in terms of making those conversations happen sooner?

That’s a great question. All of that does really play an important role to a healthy relationship, and having the chance to be on the same plane with it is important. Does it ever need to be the same? No. But having that open communication is so important, and what fans saw with last season was, there wasn’t any real communication. It spirals into this really important night, and it’s not like anything you could have expected, and it was a shock. It’s a good idea to have an idea of the politics that your partner has, maybe. I’m not a big guy in politics at all. I could literally give two shits — sorry for cussing. Sure, it plays a role, but the communication of it all is the most important part.

Viewers see lots of kissing in your first episode. Did you know that would be part of your process, or did you just get swept up in the moment?

To be completely honest with you, you just get swept up in it. It’s this overwhelming night, and it’s so exciting. You often are asking yourself like, “Wow, I’m really in this position?” I’m meeting 30 actually incredible women, and I didn’t have a game plan or anything of how the night would really go. My biggest concern was, I just wanted to speak and meet with as many women as possible. And as viewers saw, there was a lot of quick connections where the physical connection was there immediately. I’m not one to hide my emotion or what I’m feeling.

We’re learning that. (Laughs.) One public display was with Greer, as some of the women noticed you kissing her, and then she ended up getting the first-impression rose. What went into your decision to give her the rose?

What I was like looking for is, where can I find some calm — someone to just make me feel comfortable. You’re constantly going on and on, and it’s another conversation here and there, and you’re going all around the mansion. With Greer that night, she was able to make me feel comfortable and make me not feel like I’m just getting pulled in a million different directions, and it’s overwhelming. With her, it was not so much. When I was thinking back to giving a first-impression rose, it was a really good first impression of, “OK, I can relax. I can be calm near her,” which I really did appreciate.

On the other spectrum of the kissing situation, we saw the Madison relationship play out. It seemed like her pushing for that kiss may have accelerated your sense that you two weren’t the right match. What went wrong there?

With that instance, I don’t put any fault on anyone. If you have to force anything, it shouldn’t be. We’re all there hopefully to find love and to be open to the chance, but you can’t force that feeling, and it’s either there or it isn’t. With a forced kiss, I wasn’t a fan of that. That was more than telling that, “OK, I just don’t think it’s gonna be us, and forcing a kiss isn’t gonna help us.” But it is so overwhelming in that house. You’ve got a million things going on at once that sometimes you do silly, goofy things.

What are you most excited for fans to see as your season plays out?

Fans are going to be pleasantly surprised because right now, probably the No. 1 concern is, “OK, it’s this boring Bachelor, and there’s going to be no drama.” The reality is, if you are someone that likes the show because you want people to find true love and an actual focus on what it’s supposed to be about — not about acting, not about this and that — then I think fans are gonna love it. If you’re into the unnecessary drama and stuff that’s just like ridiculous and doesn’t make sense, then yeah, maybe I’m not the guy for you. But I think what I’m really excited for is everyone to see the personalities of everyone involved because that was not necessarily something included in The Bachelorette. People don’t know necessarily who I am, and on this season, you’re going to see all of me. It’s the good, the bad, the goofy — the side that hasn’t really been shown before. That’s what I’m excited for people to see.

Did you get any advice from Uncle Patrick [Warburton]?

Uncle Pat has given me some advice. Most important, he’s always supported [me] because he knows how overwhelming being on TV can be. But he’s just always said, “Hey, keep a level head. Don’t let what the people say about you dictate how you feel about yourself.” So that’s been the most important thing.

Interview edited for length and clarity.

The Bachelor airs Mondays at 8 p.m. on ABC.

Denial of responsibility! Theinspi is an automatic aggregator around the global media. All the content are available free on Internet. We have just arranged it in one platform for educational purpose only. In each content, the hyperlink to the primary source is specified. All trademarks belong to their rightful owners, all materials to their authors. If you are the owner of the content and do not want us to publish your materials on our website, please contact us by email: [email protected] The content will be deleted within 24 hours.
Share. Facebook Twitter Pinterest LinkedIn Reddit Email
Previous ArticleHulk Hogan Makes A Surprise Appearance On ‘WWE Raw’ & Fans Go Wild: Watch
Next Article Madonna Shares Birthday Wishes For Daughter Mercy, 17, Along With Party Photos Of Her Kids