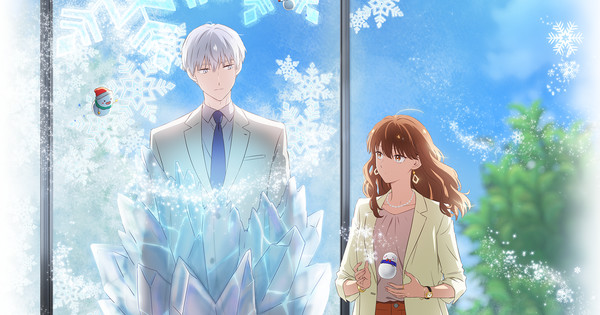 Crunchyroll revealed on Monday that it will begin streaming the English dub for the television anime of Miyuki Tonogaya‘s The Ice Guy and His Cool Female Colleague (Kōri Zokusei Danshi to Cool na Dōryō Joshi) manga on Tuesday.

The anime had an advance streaming on the ABEMA service on January 3, before its premiere on January 4 on Tokyo MX, ABC TV, and Nagoya Broadcasting Network. Crunchyroll is streaming the anime as it airs in Japan. The anime will have four Blu-ray Disc releases, shipping once a month from April through July 2023.

The “workplace fantasy romantic comedy” revolves around Himuro-kun, a modern-day descendant of the Snow Woman from Japanese folklore, and his seemingly aloof, eccentric yet kind colleague Fuyutsuki. Himuro-kun tends to freeze nearby objects or summon a snowstorm when he is agitated, and he also happens to have a secret crush on Fuyutsuki. However, Fuyutsuki is nearly completely oblivious to anything around her.

Mankyū (Sumikkogurashi – Good to be in the corner) is directing the anime at Zero-G and the new studio Liber (established in 2021). Tomoko Konparu (Blue Spring Ride, Love All Play) is overseeing the series scripts. Miyako Kanō is designing the characters. Ruka Kawada (Isekai Quartet, Is the order a rabbit?) is composing the music.

Tonogaya launched the manga on social media where it gained popularity, and is now serializing it on the Gangan pixiv service. The manga is ongoing. Square Enix published the manga’s first compiled book volume in Japan in July 2019. The company released the manga’s seventh volume on December 21.

Denial of responsibility! Theinspi is an automatic aggregator around the global media. All the content are available free on Internet. We have just arranged it in one platform for educational purpose only. In each content, the hyperlink to the primary source is specified. All trademarks belong to their rightful owners, all materials to their authors. If you are the owner of the content and do not want us to publish your materials on our website, please contact us by email: [email protected] The content will be deleted within 24 hours.
Share. Facebook Twitter Pinterest LinkedIn Reddit Email
Previous ArticleJapan PM aide scolded by ‘ashamed’ mom for putting hands in pockets on Biden trip – National | Globalnews.ca
Next Article PlayStation VR2 Launch Window Game, The Dark Pictures: Switchback VR, Delayed To March