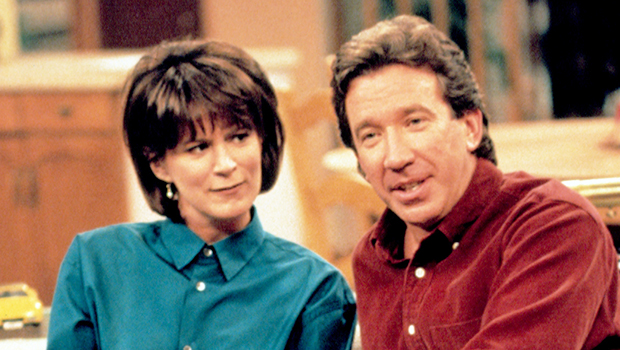 Home Improvement star Patricia Richardson, 71, has set the record straight on what was under her co-star Tim Allen‘s kilt during a resurfaced clip of him flashing her during a blooper of the hit sitcom. The 71-year-old told TMZ on Jan. 23 that The Santa Clause actor was “well dressed under there” and that she was, “just shocked that he lifted the kilt, not by a man in boxer shorts.” During the previous episode, Tim’s character (who played Patricia’s on-screen husband) playfully flashed her during a blooper of the show. “You look real sexy, you got the legs for this,” her character told Tim at the time. “Hangs long, I just wish it was shorter.”

After her response was received with a roaring laugh from the audience, the 69-year-old then lifted up the kilt to show his on-screen wife what was underneath. Both of the actors laughed it off and the scene comes to a halt. The resurfaced blooper comes just days after Baywatch star Pamela Anderson, 55, alleged that the father-of-two “flashed” her during her time on Home Improvement in 1991. The blonde bombshell recounted the claim in a recently released excerpt of her upcoming memoir, Love, Pamela, obtained by Variety.

“On the first day of filming, I walked out of my dressing room, and Tim was in the hallway in his robe. He opened his robe and flashed me quickly — completely naked underneath,” she alleged in her book. “He said it was only fair, because he had seen me naked. Now we’re even. I laughed uncomfortably.” Tim was 37 years old at the time of the alleged incident, whereas, Pamela was 23. After the excerpt was released, the outlet reached out to the For Richer or Poorer star to comment on the matter. “No, it never happened. I would never do such a thing,” he stated to Variety on Jan. 22.

Pamela also took to Instagram on Tuesday to share a message about her upcoming book, which is set to be released on Jan. 31. “My thoughts are a constant flow- Maybe more than you should know. Just one girl’s life story , Writing my book Love, Pamela was meditative, and freeing,” her caption began. “I wanted to share my experience, the ups and downs and be candidly me, to my core, open and vulnerable. I hope that comes through – All my love From me to you – P.” The highly anticipated memoir is due out just days before the one-year anniversary of Hulu’s Pam & Tommy was released.

Tim played the character of Tim Taylor for eight season during the series. On the project, Pamela played the role of Lisa The Tool Girl alongside Tim, Patricia, Taran Noah Smith, and more. The show premiered in 1991 and did not have its final episode until May of 1999. The role of Lisa was one of Pamela’s earliest roles, aside from her role as Casey Jean Parker in the Baywatch series. Tim’s most recent long-term role was on the show Last Man Standing which was on Fox from 2011 until 2021.

Denial of responsibility! Theinspi is an automatic aggregator around the global media. All the content are available free on Internet. We have just arranged it in one platform for educational purpose only. In each content, the hyperlink to the primary source is specified. All trademarks belong to their rightful owners, all materials to their authors. If you are the owner of the content and do not want us to publish your materials on our website, please contact us by email: [email protected] The content will be deleted within 24 hours.
Share. Facebook Twitter Pinterest LinkedIn Reddit Email
Previous ArticleA Ukraine victory in 2023 would be ‘big boost’ to global economy, Freeland says – National | Globalnews.ca
Next Article Amy Robach jets out of NYC after news of another alleged T.J. Holmes affair

Grammys 2023 stay pink carpet: All of the celeb outfits