Will Canada give Ukraine tanks? Trudeau says no details yet as Germany OKs exports – National | Globalnews.ca 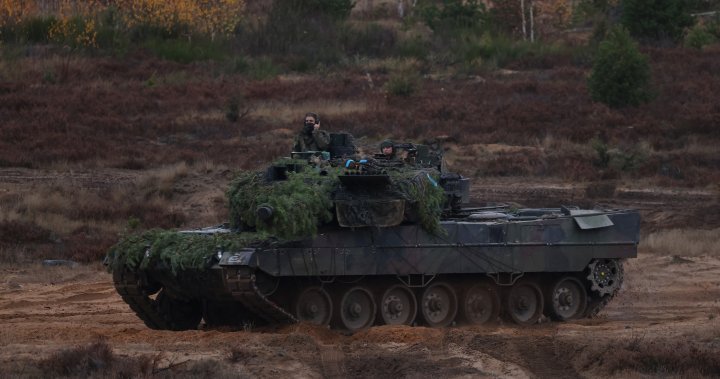 Prime Minister Justin Trudeau did not commit to supplying Ukraine with any of the Canadian military’s Leopard battle tanks on Wednesday, despite Germany approving their exports from allied nations.

Facing calls from Ukraine, Chancellor Olaf Scholz announced on Wednesday that Berlin would not only give allied nations the green light to send the German-made tanks, but would also send 14 of its own Leopard 2 battle tanks to Kyiv.

The Canadian Forces have roughly 112 Leopard 2s in several configurations, and the tanks were acquired from Germany in 2007 during the height of the war in Afghanistan

Allied nations like Poland and Finland have said they will send Leopard 2 tanks to Ukraine, but Trudeau, who has yet to take a definitive position on the issue, continued to take that stance when asked by reporters in Hamilton.

“Canada has stepped up significantly and without hesitation to support the Ukrainian people and Ukraine itself in its defence of the sovereignty of its territorial integrity, of the principles and values that underpin all of our democracies against Russia’s illegal and horrific invasion,” he said.

“We will continue to be there to give whatever support we can to Ukraine. I won’t be making an announcement today, but I can tell you we are looking very, very closely at what more we can do to support Ukraine.”

Ukrainian President Volodymyr Zelenskyy said on Wednesday he was “sincerely grateful” to Germany and Scholz for Berlin’s “important and timely” decision to provide Kyiv with battle tanks. The Globe and Mail reported last week that Ukraine intends to ask Canada for some of its Leopard 2 main battle tanks if Germany approves the re-export of the weaponry.

Germany has been accused of blocking the export of its Leopard 2 tanks over fears that Moscow will view such a move as a further escalation of the conflict. Ukraine has been seeking battle tanks from allies as it seeks to further push back Russian forces from its occupied territory.

Pentagon mum on Ukraine tanks amid reports of German, U.S. donations to Kyiv

Washington and many western allies have said the Leopards are the only suitable option available in big enough numbers for Ukraine. Despite this, the United States is poised to send dozens of its M1 Abrams battle tanks, reversing its previous position of withholding the heavy equipment. The British government announced this month it would send a squadron, or 14, of its Challenger 2 battle tanks.

Russia lashed out at Germany for its decision, with its embassy in Germany saying Berlin is abandoning its “historical responsibility to Russia” arising from Nazi crimes during the Second World War. The embassy said the decision would escalate the conflict to a new level.

Russian foreign ministry spokeswoman Maria Zakharova said Berlin’s move confirmed what she said was a “pre-planned war” against Moscow. The Kremlin said Abrams battle tanks supplied to Ukraine by the United States would “burn,” dismissing the proposed shipments as an expensive folly.

2:13
Could Canada send tanks to Ukraine? ‘Everything is on the table,’ Freeland says


How many Leopard tanks Canada could send, if it does decide to do so, is currently unclear.

However, logistics will be an issue if the Canadian government moves forward on it, he said last week.

“Obviously it’s a little easier to just put them on a train from Poland into western Ukraine than it would be for us to fly them from here to Poland to then get them on the train,” Perry said.

“You can only put one of those at a time in one Canadian aircraft.”


Logistics is an issue that could potentially face Washington in sending its Abrams tanks. The Associated Press reported Tuesday that it wasn’t immediately clear how soon the U.S. will start training Ukrainian troops on the Abrams and roughly how soon they can get to the battlefront.

Canada is among the western allies that have pledged billions worth of aid for Ukraine since Russia began its full-scale invasion on Feb. 24, 2022.

The federal government has committed more than $1 billion in military assistance to Ukraine and has imposed wide-ranging sanctions on Moscow.

Some of the military assistance to Ukraine so far from Canada includes armoured combat support vehicles, ammunition and M777 Howitzers, according to the government. More recently, Ottawa promised to provide an American-made air defence system at a cost of $406 million.

— with files from Reuters

Denial of responsibility! Theinspi is an automatic aggregator around the global media. All the content are available free on Internet. We have just arranged it in one platform for educational purpose only. In each content, the hyperlink to the primary source is specified. All trademarks belong to their rightful owners, all materials to their authors. If you are the owner of the content and do not want us to publish your materials on our website, please contact us by email: [email protected] The content will be deleted within 24 hours.
Canada Canada News german leopard tank how many leopards does canada have how many tanks in a company leopard 2a6 leopard tank canada leopard tanks politics Prime Minister Justin Trudeau russia Russia News Russia war Ukraine Ukraine news Ukraine war World
Share. Facebook Twitter Pinterest LinkedIn Reddit Email
Previous ArticleGrammys: Bad Bunny, Lizzo, Brandi Carlile Among First Round of Performers
Next Article Delilah Belle Hamlin ‘silently battling and overcoming’ chronic health issues