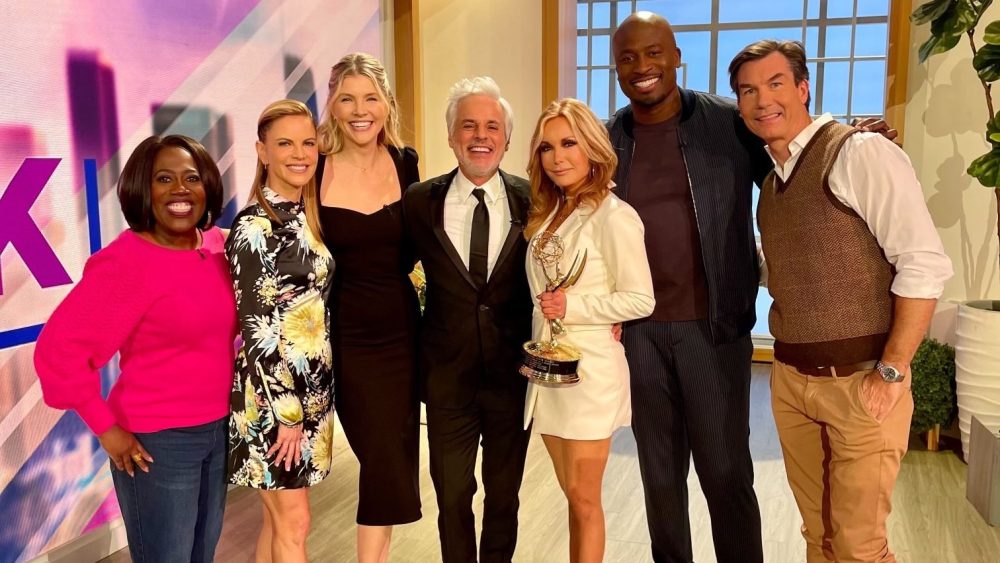 “Young and the Restless” star Tracey Bregman has her Daytime Emmy back. The star’s original Emmy was destroyed in 2018 when she lost her house during Malibu’s Woolsey Fire. As she appeared Tuesday on CBS’ “The Talk,” Bregman was surprised with a replacement statue from the National Academy of Television Arts & Sciences.

Bregman won her Emmy back in 1985 for the category that was then known as Outstanding Ingenue/Woman in a Drama Series. She appeared on “The Talk” to help celebrate her 40th anniversary on the show (which is also celebrating its 50th anniversary this year). Her on-screen husband, Christian Le Blanc, made a special appearance to surprise her with the new Emmy.

“It has been one of the most extraordinary and heartfelt experiences of my career,” Bregman said. “I tried not to go into the “ugly cry” in the air. Thanks to my ‘Young and Restless’ family, NATAS, ‘The Talk’ and everyone who made this moment happen.  My heat is so full.”

Added Adam Sharp, President and CEO of NATAS: “We were devastated to learn of the destruction of Tracey’s home, and with it, her well-earned Emmy Award. As our judges acknowledged, the Emmy statuette is a symbol of her hard work and outstanding dedication to her craft. We are happy it’s back home where it belongs.”

Watch the moment from “The Talk” here:

Lorne Michaels, the creator, writer and executive producer of “Saturday Night Live,” will be honored at this year’s PEN America Literary Gala alongside Netflix co-CEO Ted Sarandos — both having achieved recognition for their respective influence on the literary arts.

The annual gala will be held May 18 at the American Museum of Natural History in New York City, with “Saturday Night Live” cast member and show writer Colin Jost serving as the event host.

“Lorne Michaels has mentored and nurtured three generations of this country’s most talented and innovative writers, shaping the voice of American comedy as it resonates the world over,” PEN America CEO Suzanne Nossel said of the “SNL” creator. “His ability to keep his finger on our national zeitgeist for 47 years and counting makes him an unparalleled cultural icon.”

Sarandos will receive the Business Visionary Award in recognition of the Netflix executive’s impact on the contemporary storytelling landscape, which yielded an expansive range of book adaptations.

“Under Ted Sarandos’ leadership, Netflix has sparked a revolution in storytelling, bringing new voices and filmmaking legends alike into our homes and ushering in an era of novelistic absorption in the television form,” PEN America president Ayad Akhtar said. “We are especially excited by the growing interplay between the literary world and Netflix with the emergence of book adaptations as a critical source of content and the launch of the Netflix book club.”

More honorees and presenters will be announced in the coming months, including recipients of the PEN/Benenson Freedom of Expression Courage Award, the PEN/Barbey Freedom to Write Award and the master of ceremonies.

“’Killers: Caught on Camera’ is a captivating original true crime co-production, and we are confident that it will be another favorite among this genre’s audience,” said Max Einhorn, senior vice president of Acquisitions and Co-Productions at FilmRise. “We look for productions inside reliable genres yet offer unique twists. With ‘Killers: Caught on Camera,’ the ‘cam show’ has a frightening new format.”

Produced by back2back productions and CBS Reality, the show aims to offer viewers first-person footage of criminals whose wrongdoings have been caught on tape using home security cameras, CCTV and dashcams. Commentary will be provided by members of law enforcement and relatives of victims described in the series. Psychologist Julia Shaw, co-host of the BBC Sounds’ podcast “Bad People,” will also offer insight into the mind of killers, sex offenders, cannibals and other predators.

“’Killers: Caught on Camera’ is a great example of the kind of partner-centric deals within the global production community that Blue Ant International facilitates resulting in creative storytelling,” said Ben Barrett, global head of Content Financing & Partnerships at Blue Ant International. “I’m pleased to be working with this collaborative group on a very international and returnable series that I’m confident will deliver a broad audience for all partners.”

The four-way financing partnership was negotiated by Einhorn and Barrett. Einhorn will also serve as an executive producer on the series alongside Danny Fisher from FilmRise; David Notman Watt from back2back productions; and Sam Rowden and Jess Rampling from CBS Reality.

Showtime Documentary Films announced the coming release of “The 12th Victim,” a four-part true crime docuseries from director Nicola B. Marsh that dissects the true story of Charles Starkweather and Caril Ann Fugate, a teenage couple who killed 11 victims at random in 1958.

At the time, Starkweather was 18-years-old and Fugate was 14, making her the youngest female in U.S. history to be tried and convicted of first-degree murder as well as sentenced to life imprisonment. Starkweather and Fugate were plastered on news headlines in the years that followed and even inspired film franchises like “Badlands” and “Natural Born Killers.”

“The 12th Victim” will highlight previously untold details of Fugate’s story through archival footage and first-hand accounts. Labeled by the judicial system as an accomplice to murder, the docuseries aims to reconsider Fugate’s continued claims of innocence.

The series premiere airs on Showtime Feb. 17 at 8 p.m. ET, with new episodes airing each Friday in the same time slot. All four episodes will be available for streaming on all Showtime providers.

Watch the trailer for “The 12th Victim” below.

Denial of responsibility! Theinspi is an automatic aggregator around the global media. All the content are available free on Internet. We have just arranged it in one platform for educational purpose only. In each content, the hyperlink to the primary source is specified. All trademarks belong to their rightful owners, all materials to their authors. If you are the owner of the content and do not want us to publish your materials on our website, please contact us by email: [email protected] The content will be deleted within 24 hours.
Share. Facebook Twitter Pinterest LinkedIn Reddit Email
Previous ArticleSundance: Mubi Lands U.S. Rights for Ira Sachs Film ‘Passages’
Next Article C.J. Obasi on Merging West African Myths and Genre Twists in Sundance Drama ‘Mami Wata’